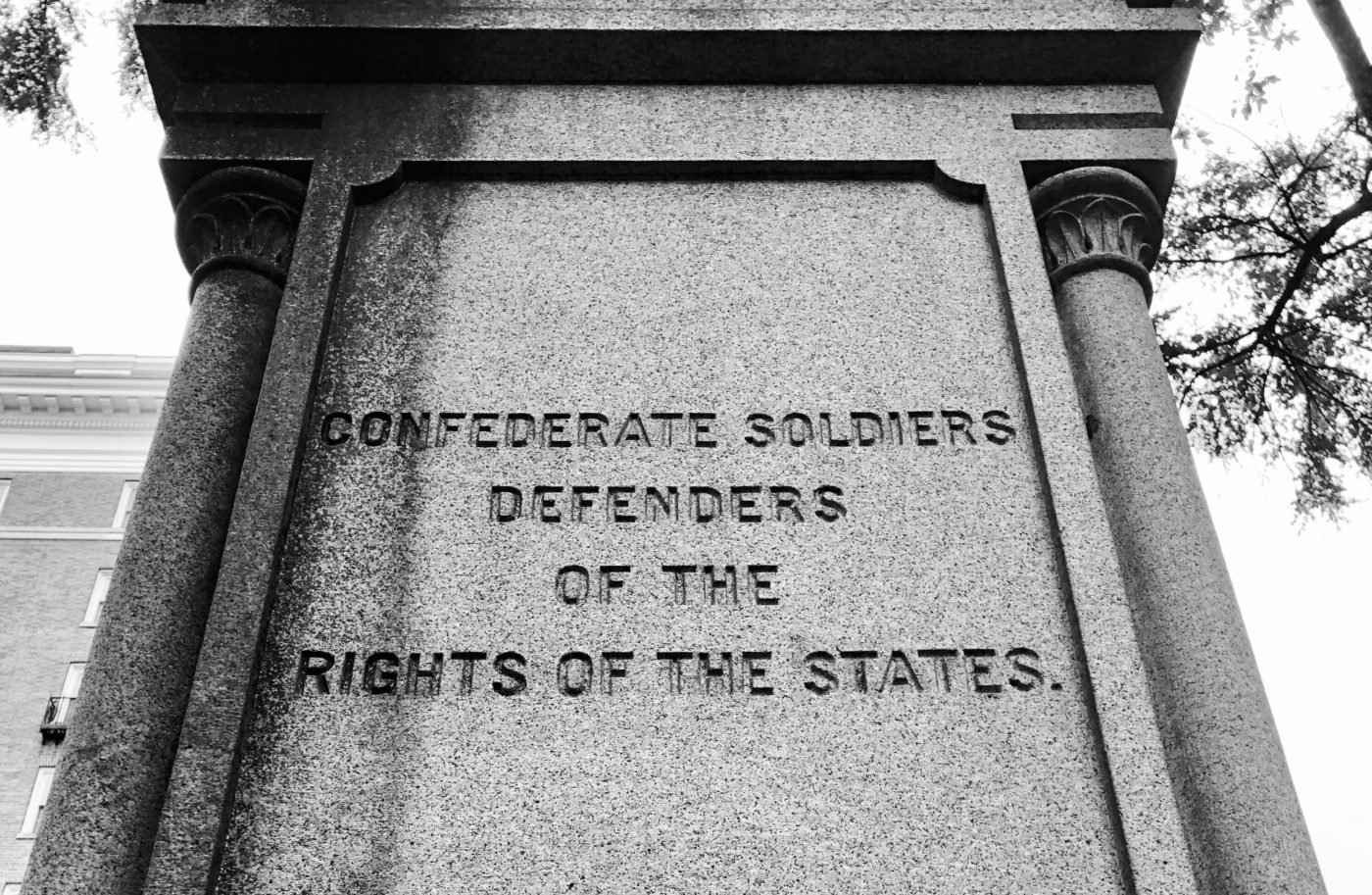 County chooses Shenandoah Valley Battlefields Foundation to take ‘Johnny Reb’ statueAlbemarle will remove ‘Johnny Reb’ statue Sept. 12, officials yet to decide where it will goCity Council waiting for judge to alter injunction to go ahead with process to remove Confederate monuments

More than a century ago, when Albemarle County officials placed a time capsule in the base of what would become their “Johnny Reb” statue, they intended it to remain there “until the angel Gabriel shall put one foot on the land and one in the sea, and proclaim that ‘time shall be no more.’”

That day for the statue, formally known as “At Ready,” arrives Saturday.

Albemarle plans to remove At Ready — a mass-produced bronze statue of an unnamed Confederate soldier — two cannons and cannonballs and give them to the Shenandoah Valley Battlefields Foundation.

The foundation will take the items immediately to the Third Winchester Battlefield, where they will be repurposed for other displays.

But the time capsule, said to lie in a cavity in the statue’s stone and cement base, will go to the University of Virginia’s Special Collections. 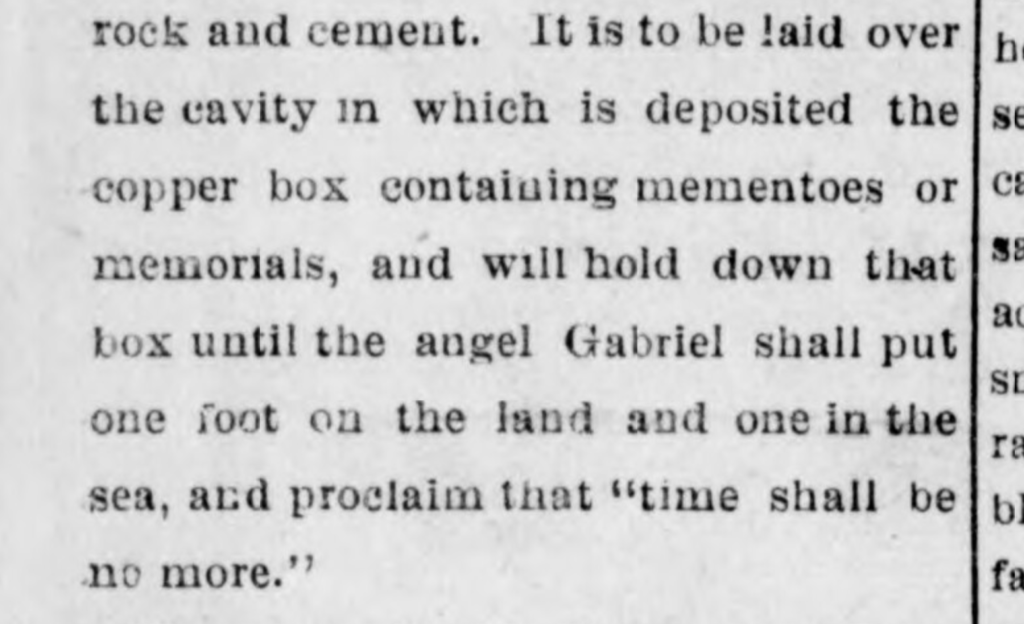 Photo of the article that appeared in the Daily Progress on March 15, 1909, the day the time capsule was placed in the base of Albemarle County's 'Johnny Reb' statue.

Credit: Courtesy of the University of Virginia Library

“When we unearth it, we’ll put it in a plastic box and bring it to UVA Special Collections,” said Emily Kilroy, a county spokeswoman. “Then they’ll, in their space, do the careful opening of the box and the caring for the objects work in their controlled setting.”

According to news reports at the time, the time capsule is a large copper box, packed with local — mostly Confederate — mementos and memorabilia.

On March 15, 1909 — the day the capsule was placed in the base and capped by a six-ton stone — a Daily Progress article reported it containing the following items: 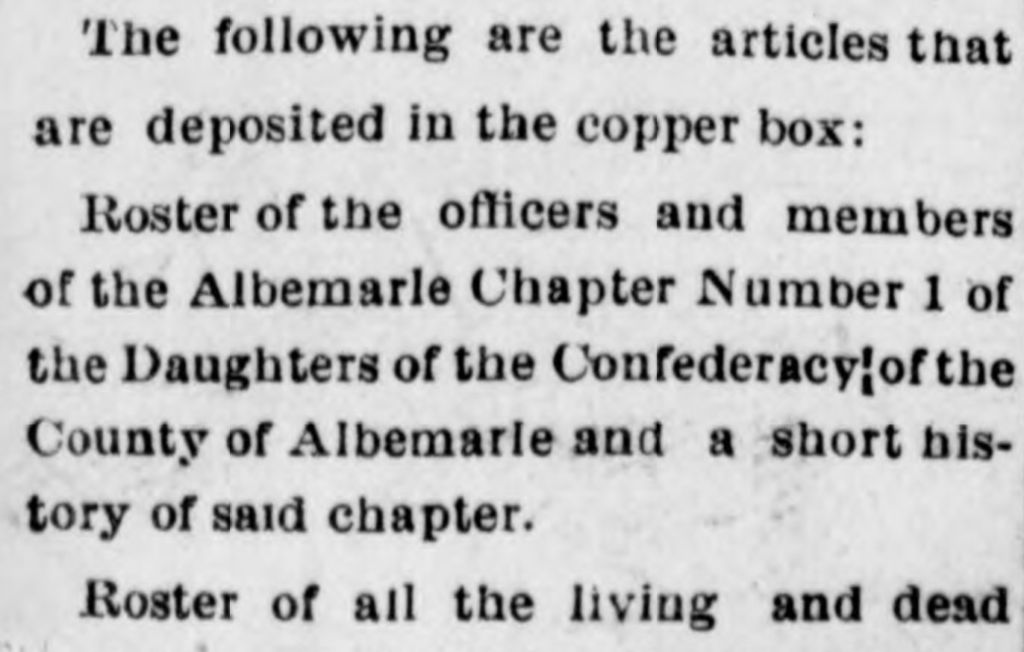 Photo of the Daily Progress article that ran March 15, 1909 regarding the time capsule placed in the base of the 'Johnny Reb' statue.

Credit: Courtesy of the University of Virginia Library

The UVA Special Collections team has cautioned “that it’s not uncommon for time capsules from this time period to be in a state that they’re not recoverable,” Kilroy said. “Most of the content, when you look through it, is paper based. It’s rosters, it’s drawings, it’s various documents from the city and the county government. And paper is probably the least likely to have survived over 100 years.”

Sue Donovan, UVA’s Conservator for Special Collections, who will take charge of the box, said it’s possible the items survived.

“I’m hopeful that since the time capsule under ‘At Ready’ is copper, that it might also be intact and the contents undamaged,” she said in an email. “But if there has been an infiltration of rainwater or groundwater, there could be severe damage of the contents, including mold and insect damage.”

The Albemarle Board of Supervisors has yet to decide what it will do with any surviving time capsule items.

Saturday’s monument removal is not open to the public due to COVID-19 restrictions. The county has said it will be broadcast on its Facebook page.