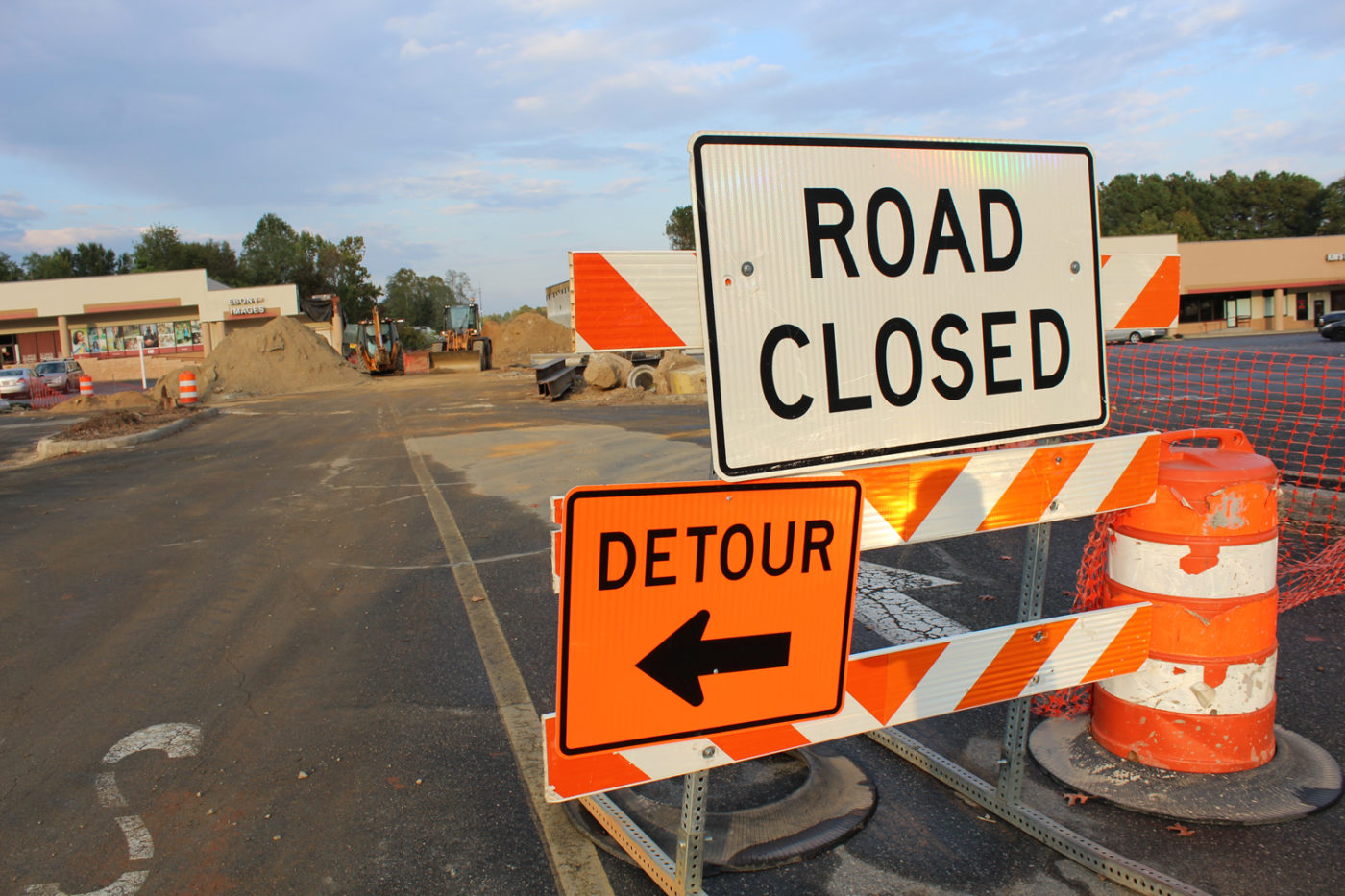 The Hillsdale Drive Extension cuts right through Seminole Square Shopping Center and three storefronts in its pathway were removed.

The construction of a mile-long extension of Hillsdale Drive is underway, but members of Charlottesville’s PLACE Design Task Force said Thursday that they should have played a greater role in overseeing its design.

The group was created in 2012 to advise the City Council and the Planning Commission on urban design issues.

However, development of the Hillsdale Drive design began well before the task force’s formation.

“[Hillsdale] is creating a new connection that is parallel to U.S. 29 but also introduces multimodal opportunities through this new corridor,” said Jeanette Janiczek, manager of the city’s urban construction initiative.

“It also provides the city an opportunity to help encourage economic redevelopment as a wonderful side benefit,” she added.

The first part of the extension was built as part of the Whole Foods Market in 2011. The road will travel north from its current southern terminus, past Homewood Suites and up through the Seminole Square shopping center.

“We’ve removed three storefronts to accommodate the road,” Janiczek said. “A new bridge is being constructed now. It goes through the Post Office property and Pepsi Place and continues on.”

The speed limit will be 25 mph and there is an 8- to 10-foot shared-use path on the eastern side of the road. A traffic signal will be installed at Seminole Court.

Several PLACE members questioned why they were being briefed on construction now as opposed to reviewing it before blueprints were finalized.

“How can we get these types of projects before us earlier so that we can actually add input versus getting a presentation?” asked Paul Josey, who is also a member of the city’s Tree Commission.

Janiczek said the project was developed through stakeholder meetings that predate the existence of the PLACE Design Task Force.

“This happened before you,” she said. “The design has been around for five years.”

Janiczek said the PLACE group will be consulted as part of future design for public projects such as the Belmont Bridge replacement. For that project, the Virginia Department of Transportation currently is reviewing an engineering and design contract with an undisclosed company.

The bridge will continue a recent design motif of impressed, stone-like shapes on concrete parapets and abutments. Such patterns now exist on bridges on the John W. Warner Parkway, as well as along the new sound walls on U.S. 250 built as part of the so-called Best Buy ramp.

Many took issue with the technique.

“It’s the use of the stamped concrete everywhere on the bridges and the retaining walls where it has no structural differentiation,” said Tim Mohr, the city Board of Architectural Review’s liaison to the task force. “It’s just kind of this blanket spray ‘can of stone’ as it were.”

When Keller asked if the PLACE Design Task Force could request changes to the pattern, Janiczek said there is a contract with Fielder’s Choice Enterprises.

“Anything that we change from [construction] documents is going to be an additional cost,” Janiczek said.

Keller wanted to know when the aesthetic decisions were made. Janiczek said they were finalized six months ago.

Keller said it should have come before the PLACE group because similar projects, such as the sound walls, have appeared before them.

“We were able to influence that,” Keller said. “I have to say I feel like that this body, which exists for this very reason, has been bypassed. This body exists to upgrade and enhance the public realm, and what’s more public realm than this? I think we should have been consulted.”

The group also discussed how the land around Hillsdale Drive Extended will be used in the future, particularly around Seminole Square.

“Great Eastern Management Company is looking to update their buildings [in Seminole Square] to do some refreshing,” Janiczek said. “The city’s vision was … moving buildings closer and having street frontage kind of like what we did with the Whole Foods, where we tried to push it towards Hydraulic. That needs to be done in conjunction with private property owners.”

The property is zoned for highway commercial use.

“It certainly doesn’t seem that the zoning that is in place now is likely consistent with street frontage buildings,” said task force member Rachel Lloyd.

Keller expressed frustration that there is no concrete timeline for when the rezoning might be changed.

“The city is salivating about redevelopment opportunities but, to the best of my knowledge, there is no real push to changing that,” Keller said, adding that she keeps hearing that any changes to Charlottesville’s zoning code have to wait until an audit of the code is completed.

“The reality is that, by the time we do the code audit, anyone that wants to grab this redevelopment opportunity would have done it under the existing rules,” Keller said.

Construction of Hillsdale Drive Extended is expected to be completed by the end of 2017, as with all of the Route 29 Solutions projects.