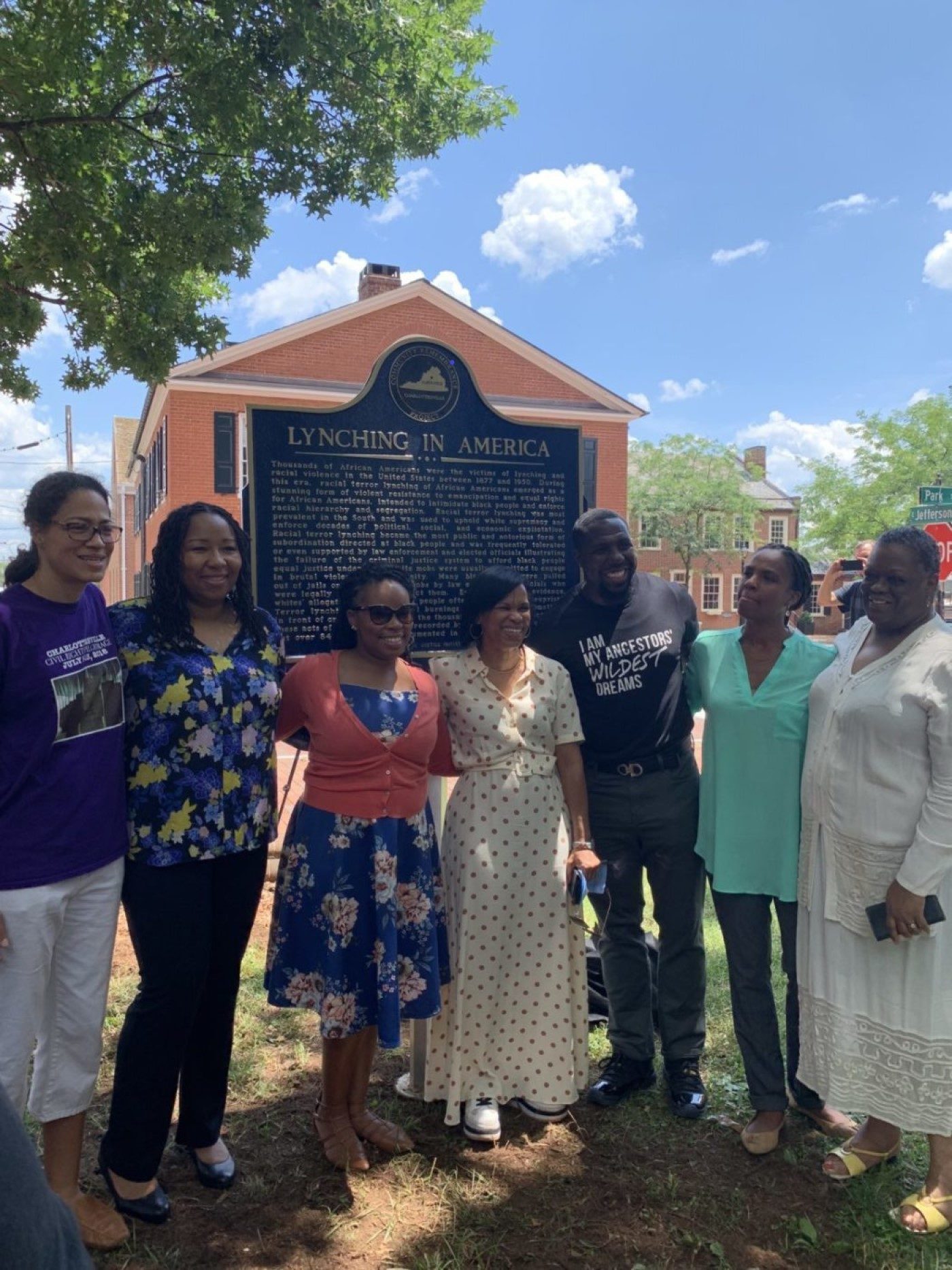 Charlottesville, Albemarle attempt to rectify past

John Henry James — an African American lynching victim — now has a historical marker on the grounds of the Albemarle County Courthouse that comemorates his life. Friday afternoon, the 121st anniversary of his death, Charlottesville and Albemarle residents crowded Court Square to witness the marker’s dedication and unveiling.

The decision to create the marker was part of the Equal Justice Initiative’s Community Remembrance Project. The organization has documented more than 4,000 accounts of lynching in the southern United States.

James, a Charlottesville ice cream seller who had lived in the city about five or six years, was ambushed by a mob of 150 unmasked armed white men on July 12, 1898, while traveling by train from Staunton to Charlottesville, according to reports. He had been jailed in Staunton after being accused of raping a prominent white woman and was returning to Charlottesville for his trial.

The two law officers responsible for James’ arrival were overtaken by the multitude near Wood’s Crossing, deduced to be along Ivy Road on property now owned by Farmington Country Club, when a white man imitated a damsel in distress, causing the train to slow. A group of black men came to James’ aid, but were forced to retreat due to the threat of the white mob, according to reports.

A rope was thrown around James’ neck as the mob dragged him to a blacksmith shop. James was granted a short moment to pray and proclaim his innocence. Despite his protests, the crowd hanged him from a small locust tree, as men took turns shooting his body repeatedly. The Shenandoah Herald reported that 75 bullets perforated his body.

James’ body reportedly hanged for hours as hundreds came to cut off his body parts to keep as souvenirs.

“The right of Mr. James to an impartial and equitable administration of the law was not overlooked. It was deliberately denied,” Albemarle Supervisor Diantha McKeel said. “Today, we shine the light of truth, and are united around a shared vision of a future community committed to repair, bonded in love, in resilience and in joy.”

According to its website, the Community Remembrance Project’s mission is “to recognize the victims of lynching by collecting soil from lynching sites, erecting historical markers and creating a national memorial that acknowledges the horrors of racial injustice.”

Soil from James’ lynching site are in civil rights exhibit in central Virginia and a national memorial in Alabama.

In conjunction with the support of the Jefferson School African American Heritage Center and the Albemarle-Charlottesville Community Remembrance project, the memorial was unveiled on the corner of East Jefferson Street and Park Street.

Mayor Nikuyah Walker said, “One of the steps to undoing the damage that has continued for over a century, is to acknowledge uncorrected wrongs.” 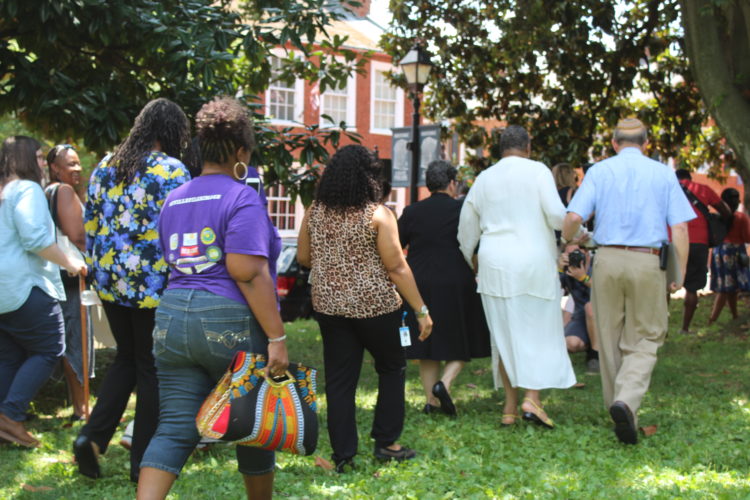 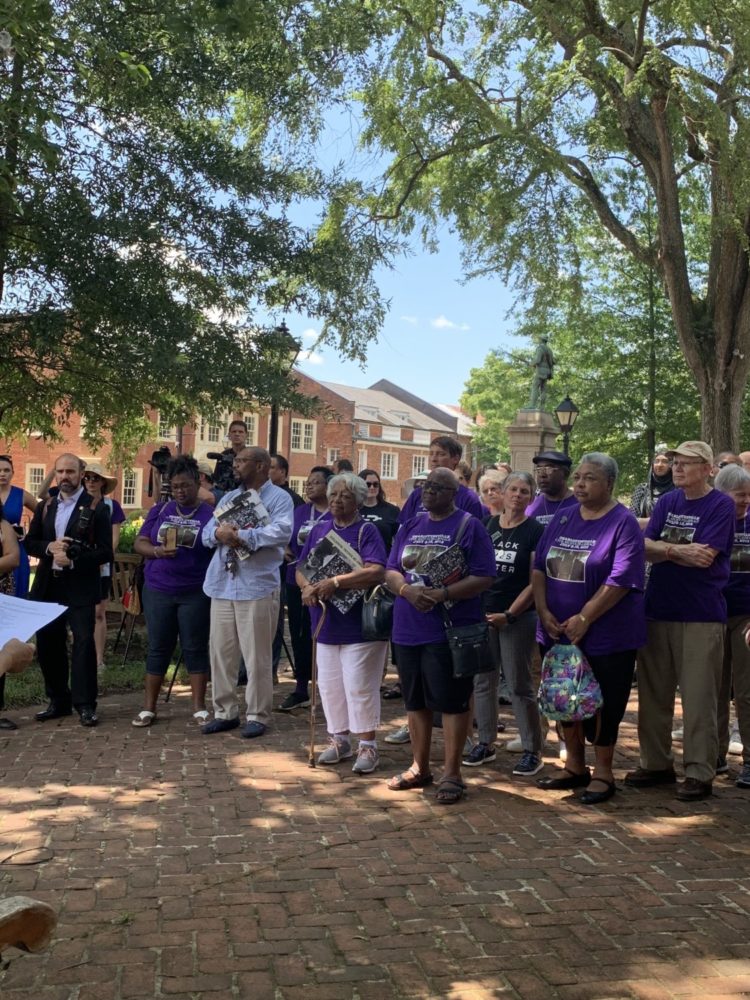 “We take this opportunity to right an old wrong, a wrong perpetuated because the nation refused to name it wrong — to look at our history and to tell the truth,” a ceremony speaker said.

Friday’s dedication concluded with popsicles for everyone, as a tribute to James’ legacy.

On Wednesday, Albemarle plans to unveil at the County Office Building a traveling exhibit featuring soil from James’ lynching site and photographs and a historical narrative to contextualize his arrest and subsequent lynching. 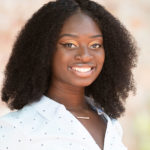 Written by:
Norah Mulinda
nmulinda@cvilletomorrow.org
Norah Mulinda joined Charlottesville Tomorrow as an intern in June 2019. She will be earning her B.A. in Media Studies and African & African American Studies from the University of Virginia in May 2021.