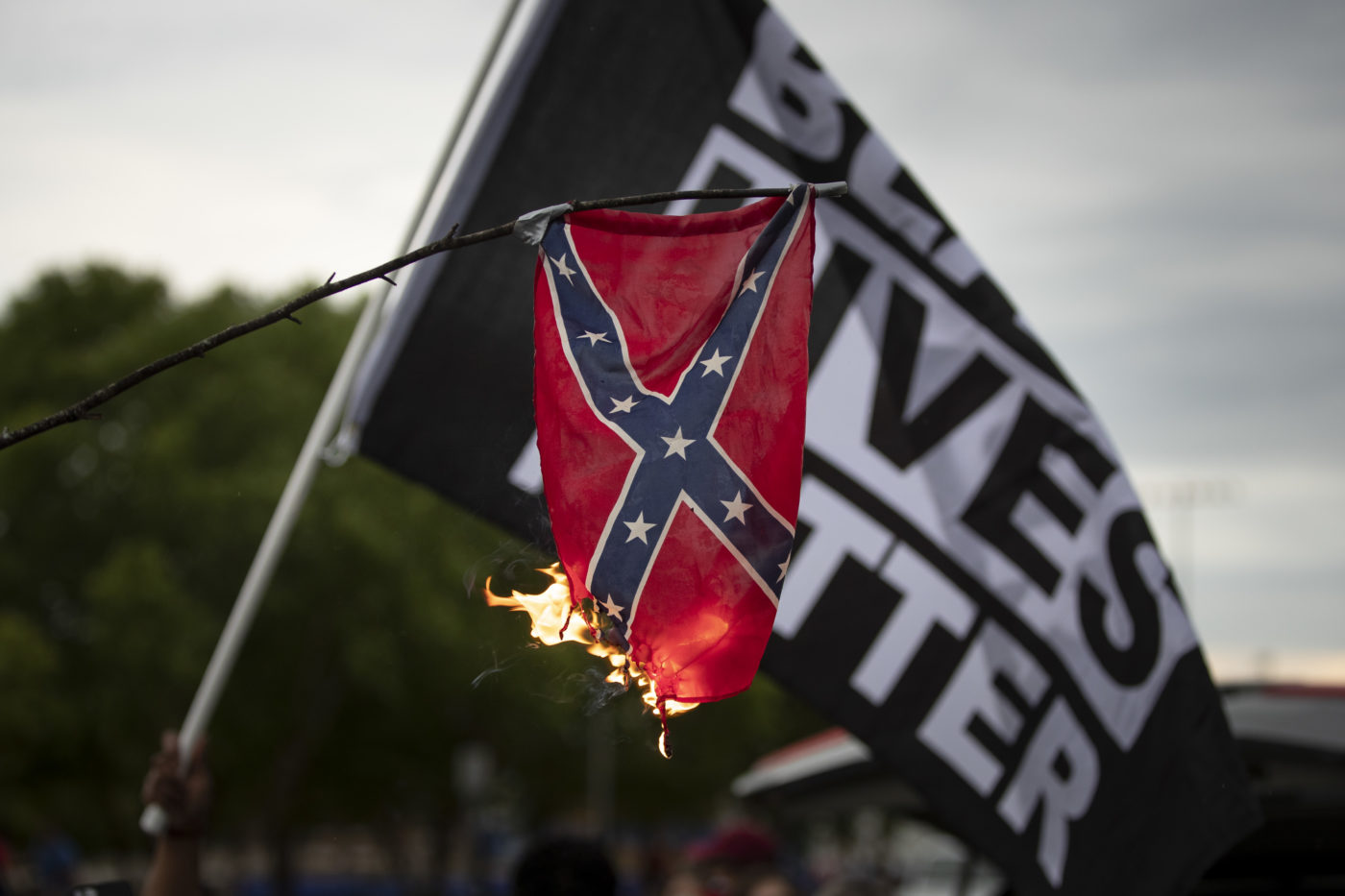 A confederate flag is burned in the parking lot of John Paul Jones Arena during the Defund the Police Block Party on June 13.

Health District OK with reopening Charlottesville schools prior to January In split vote, Albemarle School Board expands in-person learningCounty Schools expect fewer students to enroll. Will there be a big financial blow?

When Black Lives Matter protesters took to the streets across the nation earlier this year to demand change in social justice in light of the deaths of several Black people in interactions with police, the movement didn’t only inspire adults.

The eighth-graders in project-based learning teacher Augusta Enns’ class at Jack Jouett Middle School — Lily Armour, Asa Moody, Lang Ze Myitung and Alehandro Caballero-Phigo  — were in part motivated by the movement to launch a website that would allow people in the Charlottesville area to share their stories involving social justice.

While the project was originally inspired by the protests, people are not limited to share stories on other topics, including mental health, racial and ethnic identity and gender.

So far, people have submitted their stories using a Google form or email the students at cvillesjie@gmail.com.

In one of the submissions, Myitung said someone expressed having taken part in a march in Richmond regarding the statue of Confederate Gen. Robert E. Lee on Monument Avenue. She said the person, who has a strong background in music, expressed in her submission how she and her friends used music to bring people together at the march.

“We don’t plan on doing anything else. We just plan on collecting [stories] and then just putting them through the website,” Myitung said. “We don’t really plan on having a bunch of solutions or make a new policy. We just want people to see them and to learn from them.”

An aspiring family lawyer, Armour said people might hear of social injustice elsewhere. But if they can learn about the stories that are happening here in Charlottesville, they will feel a need to care about these issues more.

“This is something that’s happening here, so you start to care about it,” she said.

The group does not know what’s next for them. But Armour said she hopes the website gains popularity and more people submit stories.

“Maybe if it does work out, it can happen in other places because it’s just a place where people can share,” she said.

Enns said after the launch of the website, the plans were for the students to consider, based upon submissions received, to host a community forum allowing people to come together to view the website where students would talk about the process.

“People who had submissions to the site would be able to share out loud. Those submissions would kind of be like a launching event. It’s still in the works,” she said, adding that the students have yet to decide if that’s something they’d like to pursue. “We’re hoping to have some kind of formal event or formal launch for the community in the coming weeks.”

Project-based learning, which allows students to work on hands-on tasks, aims to teach critical thinking, Enns said, which is her goal for her students. The students take part in the class during their fourth period for the first semester of their eighth-grade year.

“In project-based learning, we don’t focus on one topic. We focus on one method of learning and teaching, and that method starts with a question that is relevant to our world and relevant to students,” Enns said.

The project started by encouraging students to brainstorm at the beginning of the year a list of about 25 topics that they were interested in.

And then Enns pulled from the list the 10 most popular topics among all students and let them vote what topic they’d like to pursue.

Initially, she said she was concerned they wouldn’t be able to do their work as rigorously as in depth as they would in person. But the opposite happened, she said.

With new challenges, they’ve been able to come up with new solutions, she added, saying that because the school operates virtually, they were inspired to create a website.

“Everyone is online to a heightened capacity  these days. So, they really responded well to the environment with the product that they created,” she said, adding that they went on breakout rooms on Zoom to brainstorm with one another as well as create and get feedback from each other.

“What I’m most proud of them for is making their voices heard. It’s a cliché to say, but students are our future, and they will be the leaders of tomorrow.”

Armour said she has always been into politics, but with the recent protests, she’s been more into it, and that’s part of what inspired the group to choose the project.

Myitung said the movement was one of the biggest reasons.

“We wanted to give these people a voice,” she said, adding that the website is open to everyone. “It’s not just racial issues.”