COVID-19 has cut down driving and cleared the air. But will transit make a comeback when it’s over? 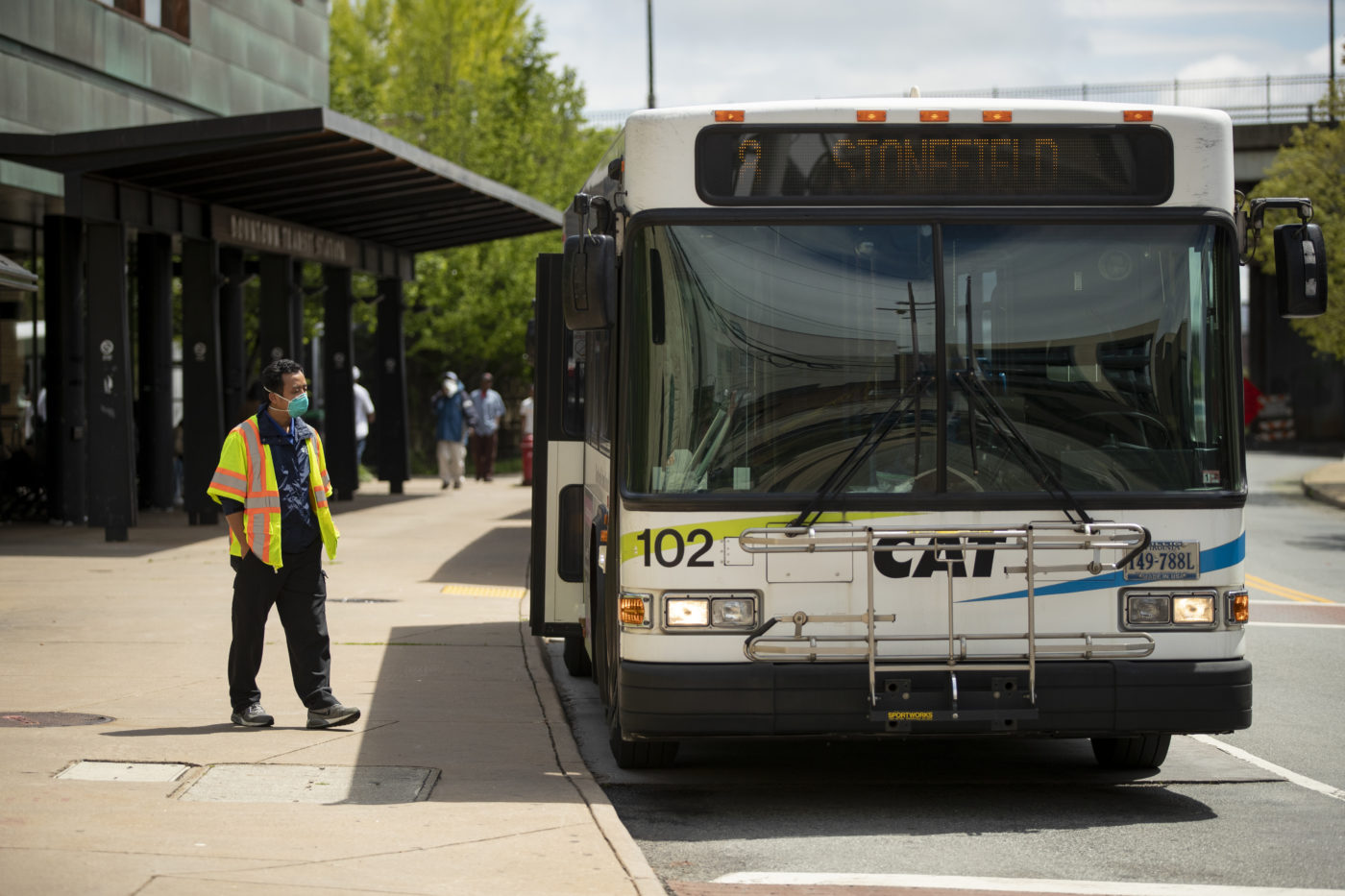 People prepare to board Charlottesville Area Transit buses at the Downtown Transit Station on April 24, 2020.

As lockdowns and social distancing measures continue, air quality is improving globally and locally because transportation emissions are the largest factor in a typical individual’s contribution to global warming. According to the Environmental Protection Agency, a typical passenger vehicle emits about 4.6 metric tons of carbon dioxide per year — more than the carbon dioxide emissions from charging more than half a million smartphones.

“Transit in urban and rural settings will change with the changes in work-from-home policies. Business practices of online meetings instead of in-person meetings are now normal and will affect transit use. Family financial situations will affect the need for transit as some people’s only choice for transportation,” Boyles said. “Also, people’s travel patterns have been disrupted, and that’s the ideal time to make changes to a system, especially when social norms have changed requiring a re-thinking of all operations.”

However, while peoples’ changing routines provide an opening to restructure transit, the looming recession spurred by COVID-19 will make this much more difficult.

“The problem is that it takes money, and the local governments and state government have no idea yet how much money they’re going to lose because of COVID-19 … and it’s hard when you have people that are sick, people that are homeless and people that are out of work to spend money on a bike path instead of meals,” Boyles said.

Challenges and uncertainties for transit

Funding for transit and connectivity — like funding for practically everything else — faces new uncertainties. Local transit organizations are still waiting to hear a final word on regional and state funding as proposed governmental budgets are being restructured to account for significant decreases in revenue. The proposed Albemarle County fiscal year 2021 budget, revised on April 22, estimates a 2.1% decrease in general fund revenues for fiscal year 2020 and a 7.2% decrease from the revenues previously expected for fiscal year 2021. Similarly, the proposed Charlottesville fiscal year 2021 budget has been scaled back to more closely resemble the current budget.

The Regional Transit Partnership has applied for a grant of $350,000 for a Regional Transit Vision Plan. This funding would be used to hire a transit consulting firm to prepare a needs analysis and feasibility study of regional transit services, identifying community needs through meetings, focus groups and surveys, Boyles explained. “The expectation is to identify needs as if no transit system exists then compare [these needs] to existing services and develop scenarios to best fill the gaps in the most efficient way possible,” he added.

The proposal for the Regional Transit Vision Plan that has been in the works since long before the COVID-19 pandemic; however, Boyles believes it to be more important now than ever in order to meet the community’s transforming transit needs.

The grant requires $87,500 matches from both Charlottesville and Albemarle spread over two years. The most recent revision of Albemarle’s 2021 budget includes an increase of $69,386 in funding for the Regional Transit Partnership, with an additional $69,386 to come in fiscal year 2022. According to Boyles, this covers the match needed for the Regional Transit Vision Plan and includes additional funds that may be used for Albemarle’s own transit planning grant, if needed.

Boyles also noted that the Thomas Jefferson Planning District Commission’s Rideshare program — a program that offers rewards like coupons and free event tickets for greener trips logged and subsidizes emergency rides home for those who pledge to carpool, vanpool, use public transit, walk or bike to work twice a week — has been asked by the Department of Rail and Public Transportation to transfer funds from fiscal year 2020 to fiscal year 2021. This means that the money not spent this year will be added to the next year’s budget, creating more leeway to maintain this year’s amount of funding for the next year in case of possible future cuts.

Brad Sheffield, the CEO of JAUNT, spoke about a decrease in funding sources separate from the state and local budgets.

“One of the keys to our success is that we bring together, on one vehicle, multiple types of services and trip needs,” Sheffield explained. “We don’t put just public passengers on a bus. We might get a contract with Medicaid and we put that person on that bus with the public individual and for the next 20 years. What that does is allows us to kind of offset the public cost of the services.”

The problem JAUNT faces now is that many of the trips funded by other sources are no longer happening, leaving public funding to cover most of the cost of running each bus. At this time, JAUNT remains financially stable. However, between the loss of these alternative revenue sources and uncertainty surrounding state and local funding, Sheffield is prepared for the possibility that JAUNT may need to scale back in the future.

“Six months from now, we’re going to have to look at what we can do with resources that we have, versus asking for resources to do what we would,” Sheffield said.

JAUNT, along with transit systems throughout the country, has seen a steep drop in ridership, from serving approximately 500 riders per day to only 150, according to Sheffield. NBC29 reported that the Charlottesville Area Transit experienced a 57% decline in ridership in March. Boyles noted that transit systems can’t expect a resurgence in ridership any time in the near future, as people are likely to fear riding in close quarters for a long time to come.

However, this seems an essential time to lay the groundwork for a future in which this global health crisis has passed and the global climate crisis remains pressing.

Officials at CAT could not be reached for comment after multiple attempts in late April.

While ridership on public transit has plunged, use of pedestrian and bicycle infrastructure is soaring, said Peter Krebs, the community outreach coordinator at the Piedmont Environmental Council.

“Looking outside it suddenly — if it wasn’t already clear to people — seems obvious to many people how precious open space and ability to take a walk or a bike ride are both for physical and mental health,” Krebs said. “People are using bike lanes and trails and sidewalks and greenways and parks and all the things we’ve been advocating for a long time. They’re being used in record numbers, and it’s highlighting that those resources are perhaps insufficient and not as well distributed as we would like them to be and not as connected as people want them to be.”

A recent University of Virginia study found that regular exercise may prevent severe acute respiratory distress syndrome, a complication of COVID-19 with an estimated 45% fatality rate, further underscoring the importance of access to pedestrian and bicycle infrastructure for a community’s health. Additionally, Krebs pointed out the link between investment in pedestrian and bicycle structure and economic prosperity.

“We’ve been arguing that the dichotomy between recreation and transportation and amenities and infrastructure is a bit of a false dichotomy, that we’re actually talking about infrastructure that is the basis for prosperity. And it’s a kind of prosperity that begins with a healthy mind and a healthy body,” Krebs said. “The data has shown for a long time that connectivity is associated with economic prosperity.”

The Piedmont Environmental Council works with the city and county to improve internal connectivity so that people are connected from their home to their jobs, schools, shopping centers, and other resources. Not only does internal connectivity increase residents’ ability to choose walking or biking over vehicle use, but it also lays an essential foundation for public transit, which depends on the accessibility of stops from homes and destinations. “Transit is not possible without walkability,” Krebs said. “And then walkability makes even more sense if you have transit there to help you span the big distances. We don’t see that changing. That’s always true.”

In the revised Albemarle budget for the next fiscal year, bike and pedestrian infrastructure falls under a list of projects recommended prior to the COVID-19 pandemic that are now recommended to be delayed. However, even while such projects might not immediately proceed as hoped, many of us can still work to change our habits and mindsets moving forward.

“My big hope is that people are aware of how important it is to walk around freely or get around on a bike,” Krebs said. “I hope people are seeing how much clearer the air is and perhaps thinking to themselves, maybe we as a collective don’t have to be as auto-dependent as we’ve been in the past.” 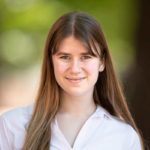 Written by:
Marie Ungar
Marie Ungar grew up in the Charlottesville area and is a rising junior at Harvard University, studying English and psychology. Marie is an arts writer for The Harvard Crimson, the poetry editor of The Harvard Advocate, a DJ at WHRB Cambridge 95.3 FM and a peer counselor with Room 13 Peer Counseling. Previously, the Albemarle High School graduate worked as an academic residential assistant at the School of the New York Times.