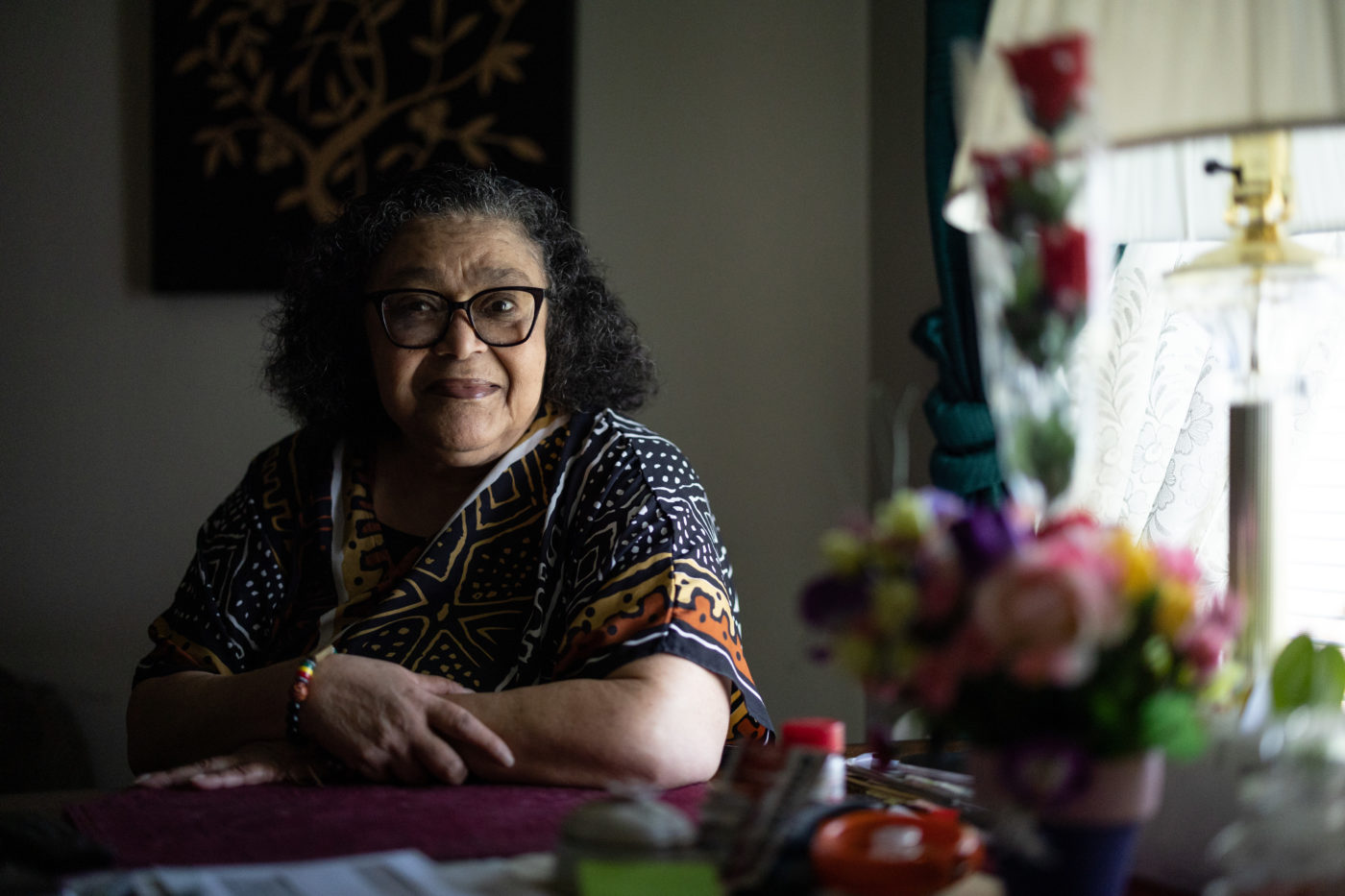 Mary Carey is among those Midway Manor residents who've been affected by regular elevator outages. She hopes other upgrades can be made to the building as well.

Residents of Midway Manor have one fewer thing to worry about right now: Their leases.

Charlottesville Tomorrow has confirmed that Midway Manor LLLP, the company that owns the building whose apartments are publicly subsidized for seniors and folks with disabilities, is in the process of renewing its Section 8 contract with the U.S. Department of Housing and Urban Development.

In a City Council meeting last year, councilors discussed some of the properties in the city whose Section 8 contracts were set to expire, and Midway Manor—whose initial 40-year contract expires this fall—was among them.

Residents and other community members started wondering, worrying, what would happen to the building’s residents if the owner chose not to renew the affordability contract. Where would these folks go if they could no longer live at Midway Manor, in a city where an affordable apartment is hard to come by, particularly for people of very low-income?

Those worries only grew as various building repairs have been neglected, most notably the functionality of the building’s two elevators, which haven’t worked properly for over a year. The frequent outages have repeatedly created health and safety hazards for the building’s residents, who have reported having to crawl up and down the stairs to get imperative medications from their mailboxes, among other things.

Various repair people and elevator technicians have attempted to fix the elevators over the past few months, since Charlottesville Tomorrow initially reported on the frequent outages, but those problems persist.

And though on-site management sometimes posts notices about elevator outages, other times, residents say, the only way residents know when an elevator is out is when the lights above an elevator door are not lit, as they were above one elevator when Charlottesville Tomorrow visited a few weeks ago. 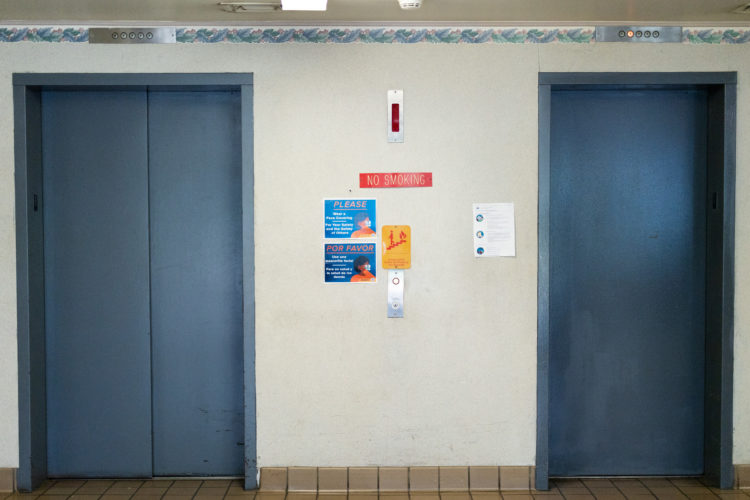 At times, the only indication that an elevator is out at Midway Manor is when the lights above the elevator door are out, as they are in this photo, for the elevator to the left.

Residents and community advocates appeared before city council to ask officials to investigate whether Midway Manor’s owners, who have not yet returned any of Charlottesville Tomorrow’s calls, were purposefully allowing the building to fall into disrepair. They feared the owners wanted the low-income residents to leave on their own volition so that the property — located on some prime Charlottesville City real estate, right near the Downtown Mall — could be more easily resold.

HUD, as well as Virginia Housing, confirmed that is not the case.

Kyla Goldsmith-Ray, a spokeswoman for Virginia Housing, confirmed last week that while the owners of Midway Manor intend to renew the Section 8 contract, Virginia Housing will not be the contract administrator for the new contract, as they have been for the current contract, which expires this fall.

Nika V. Edwards, a spokesperson for HUD’s mid-Atlantic office, confirmed the same in an email.

“Under a Section 8 Housing Assistance Payments (HAP) contract, HUD provides subsidized housing for residents at Midway Manor, which is privately owned and managed,” Edwards wrote. That contract is between HUD and the property owner, Midway Manor LLLP, and “through that contract, HUD makes up the difference between what a very low-income household can afford and the approved rent for an adequate housing unit.

“This contract is currently in the process of being renewed to continue providing decent, safe, and affordable housing to Midway Manor residents,” Edwards added, noting that the renewal process is not yet complete, and at this time, the final terms of the contract—such as how long the contract will be renewed for—are not yet finalized.

“The units to be inspected will be chosen at random by the inspector the day of the inspection,” the letter reads, before asking residents to reference a list of things to do in their apartments by September 20 at the latest. Among other things, residents are asked to replace any burned out light bulbs; remove foil from stove pans, ovens, and oven racks; and to have the fire extinguisher in its designated spot.

Residents “must not have any items blocking [their] windows, doors or patios,” which can be a challenge in the apartments, due to their layout and small size. They must also ensure that their utility closets, which are some of the only storage spaces residents have in their apartments and also hold the electrical breaker boxes and water heaters, are uncluttered so that the inspector can step inside for a look.

Mary Carey, a Midway Manor resident, hopes that the upcoming inspections, likely related to the Section 8 contract renewal, will result in new elevators and a few other repairs, including updated appliances, and cosmetic fixes. Paint is peeling away from drywall seams and some kitchen fixtures are rusty and worn. Construction on the building was completed in 1981, and the owners started leasing apartments that same year.

Carey and other residents would also like to see ownership and management fix a light in the parking lot and tend to landscaping more frequently. They also hope that the city will consider putting a bench out at the South Street bus stop near the building, so that folks waiting to go to their dialysis appointments, for instance, can sit while they wait.

They’d also like to see a new American flag hoisted up the flagpole in front of the building. The current one is faded and tattered, and Carey finds it particularly disrespectful to the veterans who live at Midway Manor. She hopes that when a new flag goes up — whether ownership and management get it done, or if it’s left to residents — those veterans will be asked to raise it. 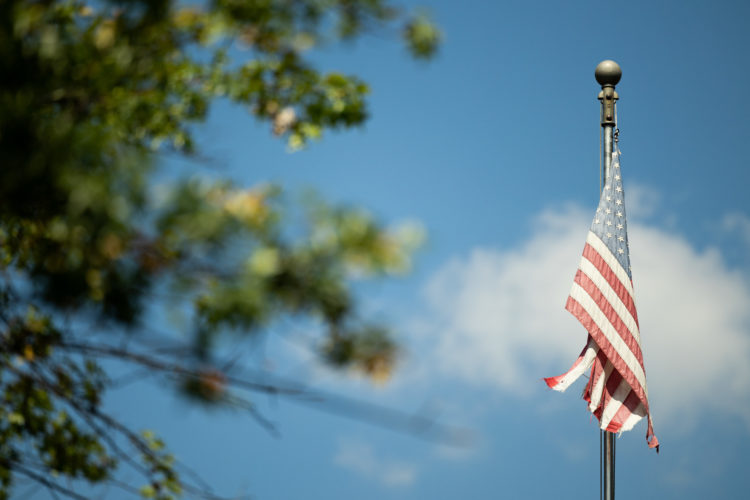