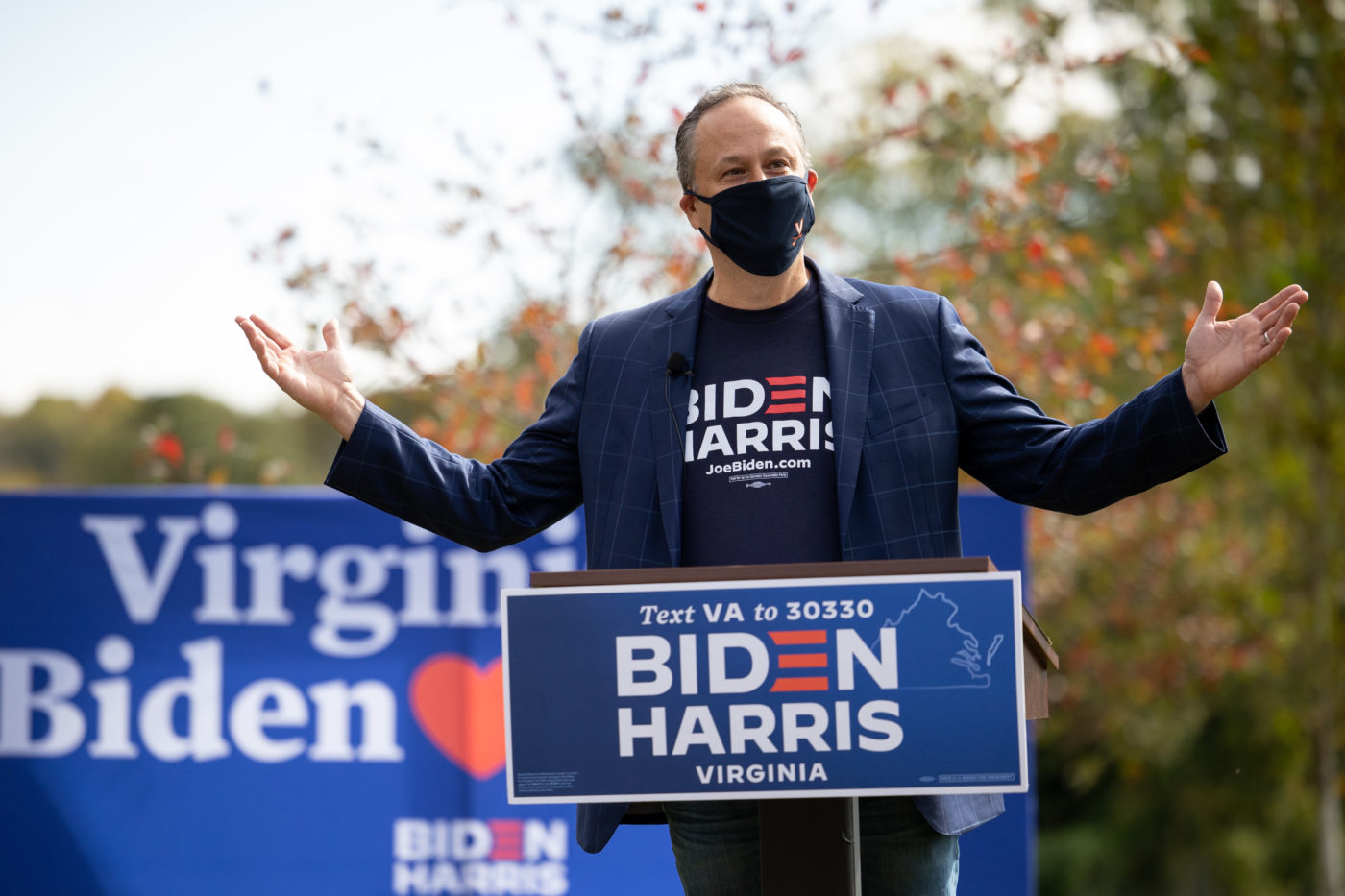 Doug Emhoff, the husband of vice presidential candidate Kamala Harris, stopped by Rives Park in Charlottesville on Oct. 13 to promote voter registration on what was slated to be the final day to do so in Virginia.

As the potential second spouse of the United States encouraged first-time voters to register, the state was experiencing an accidentally clipped fiber optic cable resulting in the crash of the Virginia Department of Elections website that has since been resolved.

It was also Emhoff’s birthday, so the crowd later sang to him ahead of collecting campaign literature and heading out to knock on doors.

“It’s my birthday, and there’s no place I’d rather be than to be right back here in Virginia, again, talking about the Biden/Harris ticket,” he told the crowd of about 80 who stood masked and socially distanced on tape markings on the ground. 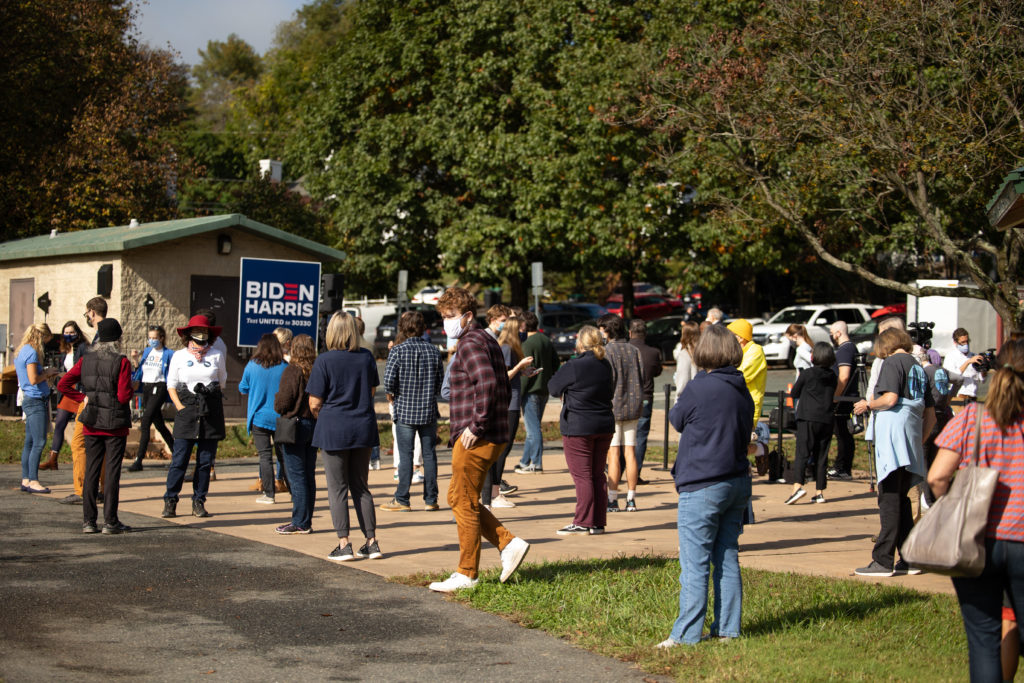 A crowd listens to speeches by Doug Emhoff and Dr. Cameron Webb.

Echoing a refrain of Biden’s campaign, Emhoff reflected on the events of the summer of 2017, during which white supremacists and neo-Nazis rallied at the campus of the University of Virginia and in downtown Charlottesville, resulting in the death of Heather Heyer and the injury of more than 30 people.

“Everywhere that Joe [Biden] goes, he talks about the importance of giving hate no safe harbor,” Emhoff said.  “They really will restore the soul of America,” he said of his wife and her running mate.

Biden’s 2019 campaign launch featured imagery from the Unite the Right rally and Charlottesville has been evoked by both Biden and Harris in presidential debates recently. 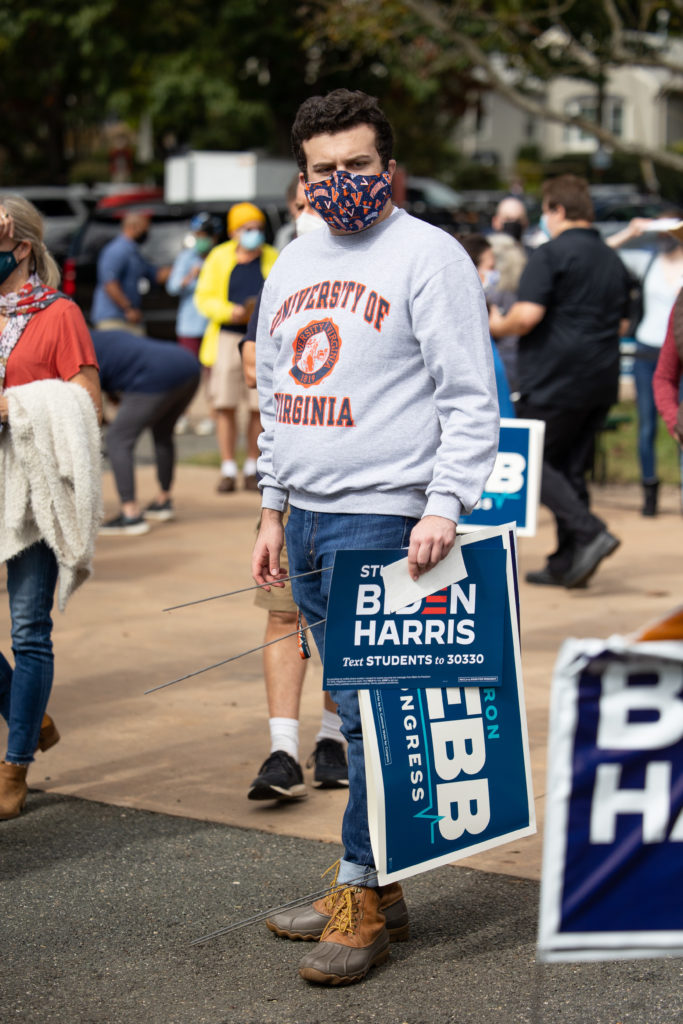 Attendees gather yard signs and campaign materials ahead of a canvassing event for Dr. Cameron Webb.

Emhoff also stressed the significance of healthcare policy amidst the COVID-19 pandemic and current political campaigns.

He explained that Biden and Harris aim to ensure treatment and testing for the coronavirus is free and accessible to all and that the administration would work to enhance contact tracing efforts to help minimize the spread of the disease.

Emhoff touted Webb’s experience working as a White House fellow for both the Obama and Trump administrations, and ability to work with others at a time he said American politics have been so “divisive.”

In his voter outreach efforts, Webb has physically visited or engaged virtually with counties across the district which spans from the North Carolina border to Northern Virginia. In the final weeks before the election, Webb has launched a tour to revisit every county for a variety of events that include meet-and-greets, small business tours, cookouts and a skeet shooting event.

“We thought it was important to take one more pass through every single county to show people ‘hey we’re still here to represent them,” Webb said in an interview with Charlottesville Tomorrow. “We feel like people are hearing our message of building consensus, they’re hearing our message of unity and really moving our district forward. It’s resonating. So we’re feeling great. We just want to execute these last three weeks.”