If you’re in Phase 1B, you might be waiting months for a COVID-19 vaccine 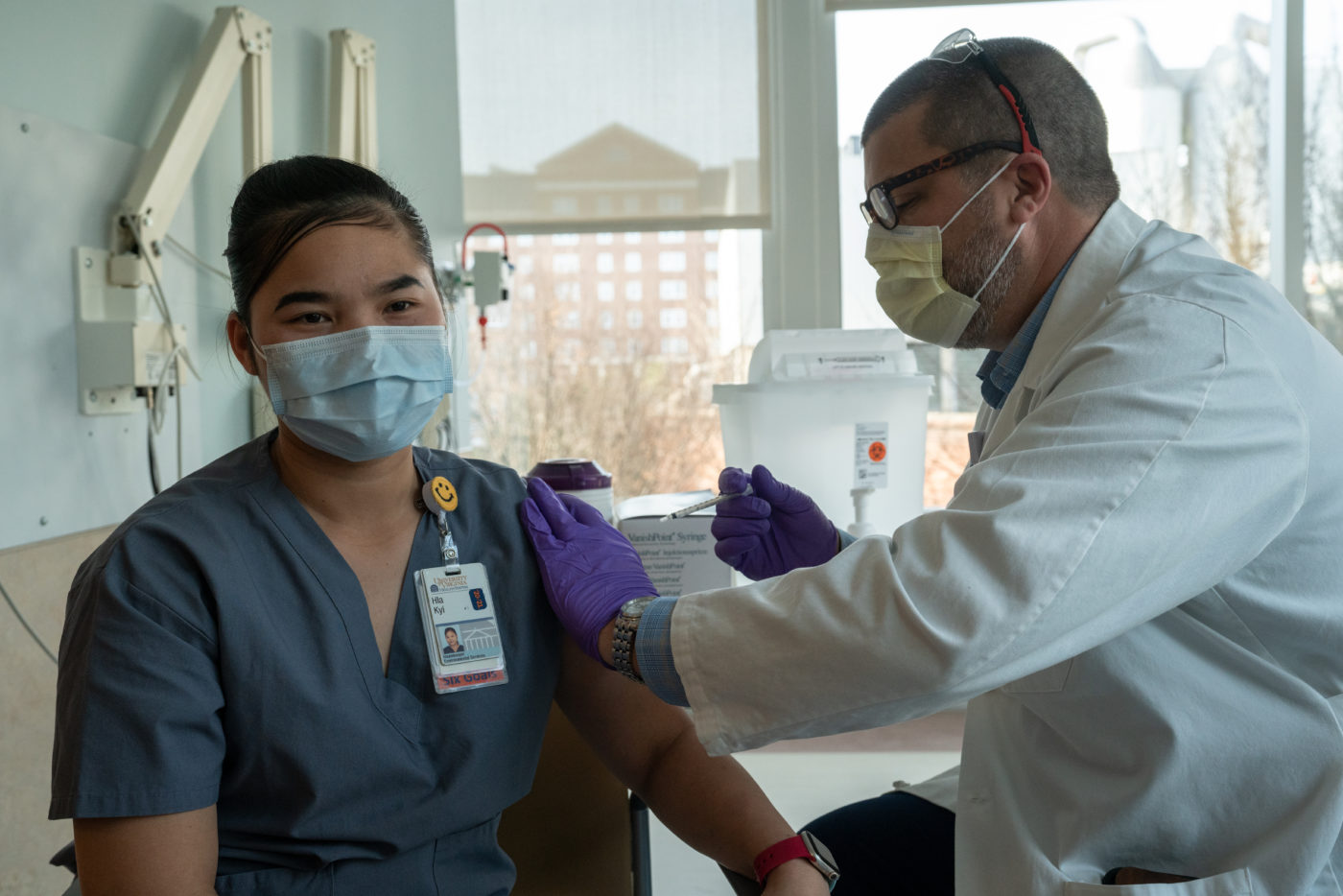 Hla Kyi receives the vaccine. She works in environmental services at UVA Health.

As COVID-19 cases reach their highest ever in the local health district, the vaccine rollout has been marred with scant vaccinators, technical glitches and now an outright shortage.

As of Friday, more than 35,000 people who qualify as part of Phase 1B had signed up to receive the vaccine from the Blue Ridge Health District — but it could be months before they receive an appointment.

The district is now receiving fewer than 3,000 doses of vaccine a week.

“We opened 1B before we fully understood the vaccine shortage,” said Denise Bonds, director of the Blue Ridge Health District.

The district also opened 1B before finishing Phase 1A, which includes area healthcare workers and residents of long-term care facilities.

The BRHD, formerly Thomas Jefferson Health District, is responsible for vaccinating all such health care workers who do not work for a hospital. Hospitals are vaccinating their staffs independently.

Early this week, University of Virginia Medical Center had vaccinated nearly 10,000 of its employees. Bonds could not say how many healthcare workers the health district has vaccinated. Also unclear is how many continue to await appointments.

The health district this week announced it was partnering with Sentara Martha Jefferson Hospital to vaccinate some 1A individuals. The hospital should begin reaching out to people soon, Bonds said.

Meanwhile, UVA Medical Center will start vaccinating local people ages 75 and up who have already submitted online surveys to the health department indicating their interest in getting vaccines.

The hospital attempted to schedule appointments with some of the 5,500 people who fit this criteria earlier this week, but ran into technical difficulties in notifying people about their appointments. Bonds said the issue is being resolved.

It’s one of several technical issues that have plagued the health district since beginning to vaccinate the community just weeks ago. With so many people now eligible for the vaccine, and so few vaccines to distribute, the department is capturing people’s information largely through online surveys that “indicate intent” but do not schedule, nor guarantee appointments.

Many who fill out the survey do not receive confirmation that the health department received their information and are left to wonder.

Some of those who have been granted appointments ran into further trouble trying to use the state’s online scheduling system to make an appointment. The health district said it is piloting a new program that should be easier to use beginning next week.

Against this backdrop, local cases have reached record highs following the holiday season. Most of the spread is happening through small family gatherings.

“We’re not there yet,” Bonds said. “There is a light at the end of the tunnel, but it is going to take a little bit of time. Please limit your social gatherings. Those have been a huge source of infection, particularly recently. We really ask you to stay in your own household. We know it’s been a really long year, we appreciate everything you’ve done to keep the community safe, and I just need you to keep doing it for a few months more.”

Have questions about the vaccine? Email reporter Jessie Higgins at jhiggins@cvilletomorrow.org.