We can improve system for bicyclists 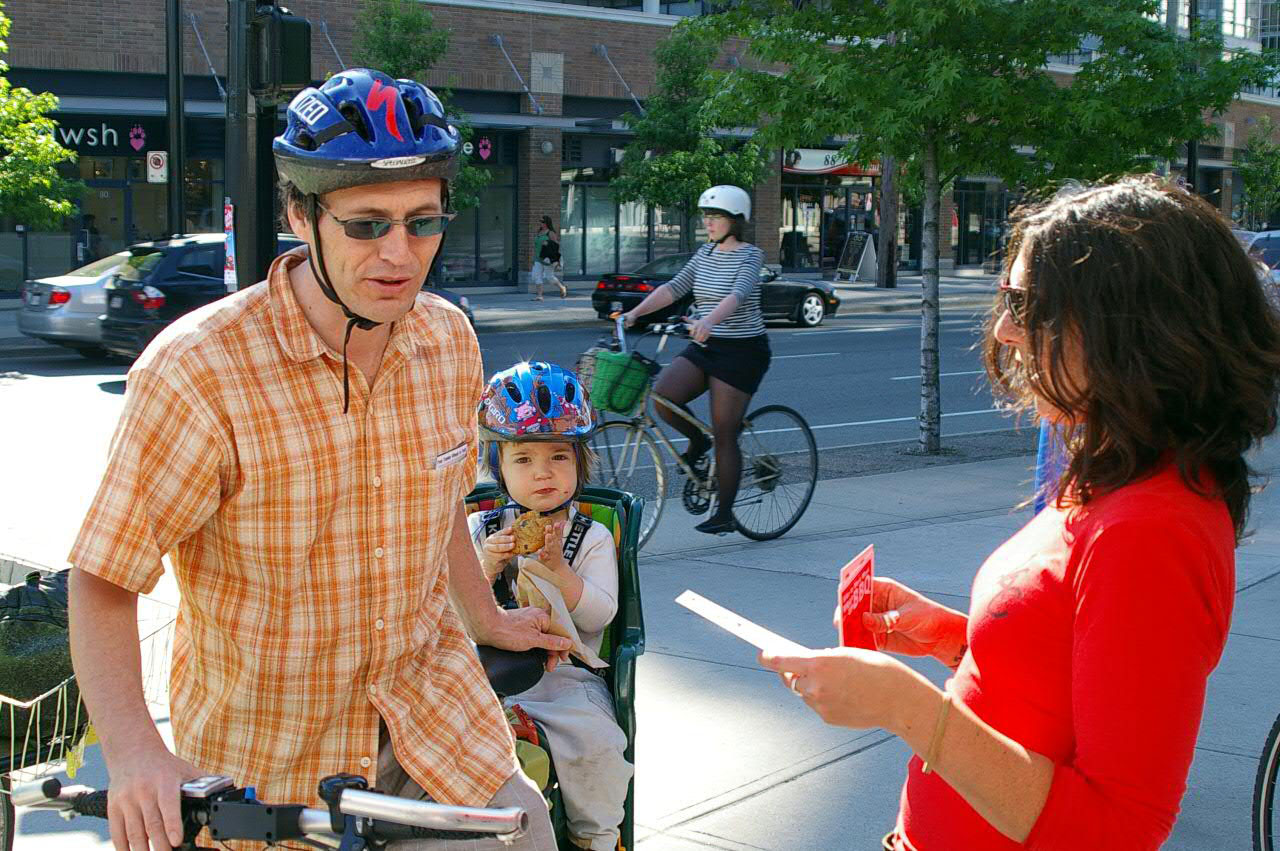 Bicyclists getting tickets need to watch the road, and court computersBike tickets on the rise, with consequences for driving records

Bike tickets are on the rise and they carry the same fines and legal consequences that vehicle infractions do.

This system is a bad one for four big reasons:

1. The cost of a ticket is disproportionate to the cost of riding a bicycle

The cost of a traffic ticket is scaled to the cost of owning and driving an automobile.  One ticket costs about as much as it costs the average American to own and drive a car for a week.  That’s enough to be a reasonable deterrent, but not an unreasonable expense for someone paying an average of almost $8,000 a year to own a car and drive it.

For most riders, bikes are a cheaper alternative.  They are a way for people with less disposable income to get access to some of the same opportunities as those who can afford to drop money on cars, gas, and parking.  They allow people to trade comfort and some speed for savings and exercise.  Getting a bicycle ticket threatens this trade-off immensely.

While $150 is a drop in the bucket for a car owner, it may be half the cost of a bicycle and more than it costs to ride a bike for a year.  That’s a huge risk.  A ticket a year only slightly raises the cost of driving.  A bike ticket a year makes biking almost not worth it, putting another car back on the road or depriving someone of reliable transportation.  Compare it to the outrage drivers felt in 2007 when the state legislature tried to increase fines by 700% to make up our traditional transportation budget shortfall.  The costs were simply unreasonable for drivers to absorb in comparison to the other costs of driving.  Current ticket prices for bikers are just as unreasonable.

2. Bicycles are not 2-ton blocks of metal that go 70 mph and kill thousands of people a year

Fines are high for traffic violations because traffic violations are a big deal.  Cars kill over 30,000 people a year in the United States and injure hundreds of thousands of others.  Cars are weapons that can do serious and expensive damage to others on the road – including cyclists, whom they kill at a rate of over 600 a year.

Bicycles, to put it simply, do not.  The dangers posed by the two modes are several orders of magnitude apart.  As much as drivers may rail about the behavior of bicyclists being unsafe or causing accidents, there are almost no recorded incidents of a vehicle occupant being injured because of the actions of a bicyclist.  You have a better chance of becoming President of the United States than of getting hurt by a bicyclist while you are in a car.  The only people reckless bikers put in danger on the road are themselves.

Bikes can be a danger to pedestrians, especially if ridden on the sidewalk.  Yet they still injure pedestrians much less frequently (and less severely) than cars do.  By comparison, around four thousand pedestrians are killed by cars every year and tens of thousands are injured.

3. It is often difficult for bicyclists to follow the rules safely

We are not yet at the point where cycling according to the rules is an easy feat.  Many traffic signals only change when a car pulls up to them.  Rocks, glass, snow, and other debris in bike lanes often force bicycles to swerve in and out.  When they do so, they risk being charged with “reckless driving,” a widely abused citation for cyclists.  Coming to a complete stop rather than a rolling stop at stop signs forces cyclists to put a foot down and waste additional time starting again, angering motorists behind.  Cyclists can get tickets for failing to signal turns, which is often unsafe.  While signaling, the cyclist risks losing control of the bicycle as well as the ability to brake with that hand.  These and other problems are not insurmountable, but the roadway is still a harsh place for bikes.  The rules are not as tailor-made or easy to follow as they are for vehicles.

4. Motorists are almost never held responsible for collisions with bicycles

Negligent drivers who injure passengers in another car can expect to pay hefty insurance bills and potentially face legal consequences.  But if they hit or even kill a cyclist, there are rarely any consequences at all.  Read Daniel Duane’s excellent op-ed in the NYT: “Is it ok to kill cyclists?”   It’s a nationwide issue, but Virginia is a particular offender.  We are consistently unable to get even common sense protections for bicyclists on the road, including a shameful vote in committee last month to kill a bill protecting bikes from “dooring.”

The Economist has this to say about American traffic laws: “[M]otorists in America generally receive no punishment whatsoever for crashing into or killing cyclists, even when the accident is transparently their fault. This insane lacuna in the justice system reflects extreme systemic prejudice by drivers against cyclists, and would be easy enough to fix.”

The only place where cyclists are treated as equals is when being fined for traffic violations.

Bike lanes and separated cycle tracks are the only way to make cycling truly safe and effective as a means of transportation.  In the meantime, we need two things:

1. Amended rules for cyclists that allow them to use their natural advantages to everyone’s benefit and grant them the same common sense protection given to every other type of vehicle.

2. A scaled-down fee schedule.  Moving violations should cost about one tenth the equivalent vehicle fine to reflect the difference in cost of ownership.  Most bike tickets should range from $10 to $20.  Before this can work, Virginia needs to fix its absurd system of flat “court costs.”

If we scaled down these costs and fixed our bicycle laws, then I might be in favor of handing out more tickets.

Luke Juday is a proud Virginian and a graduate student in the UVa School of Architecture.  He has also worked as a middle school teacher and debate coach.  He rides a bike because he owes a lot of money for his education and doesn’t like going to the gym – not because he’s training for the Tour de France.