In seeking second term as governor, McAuliffe points to detailed policies and past experience 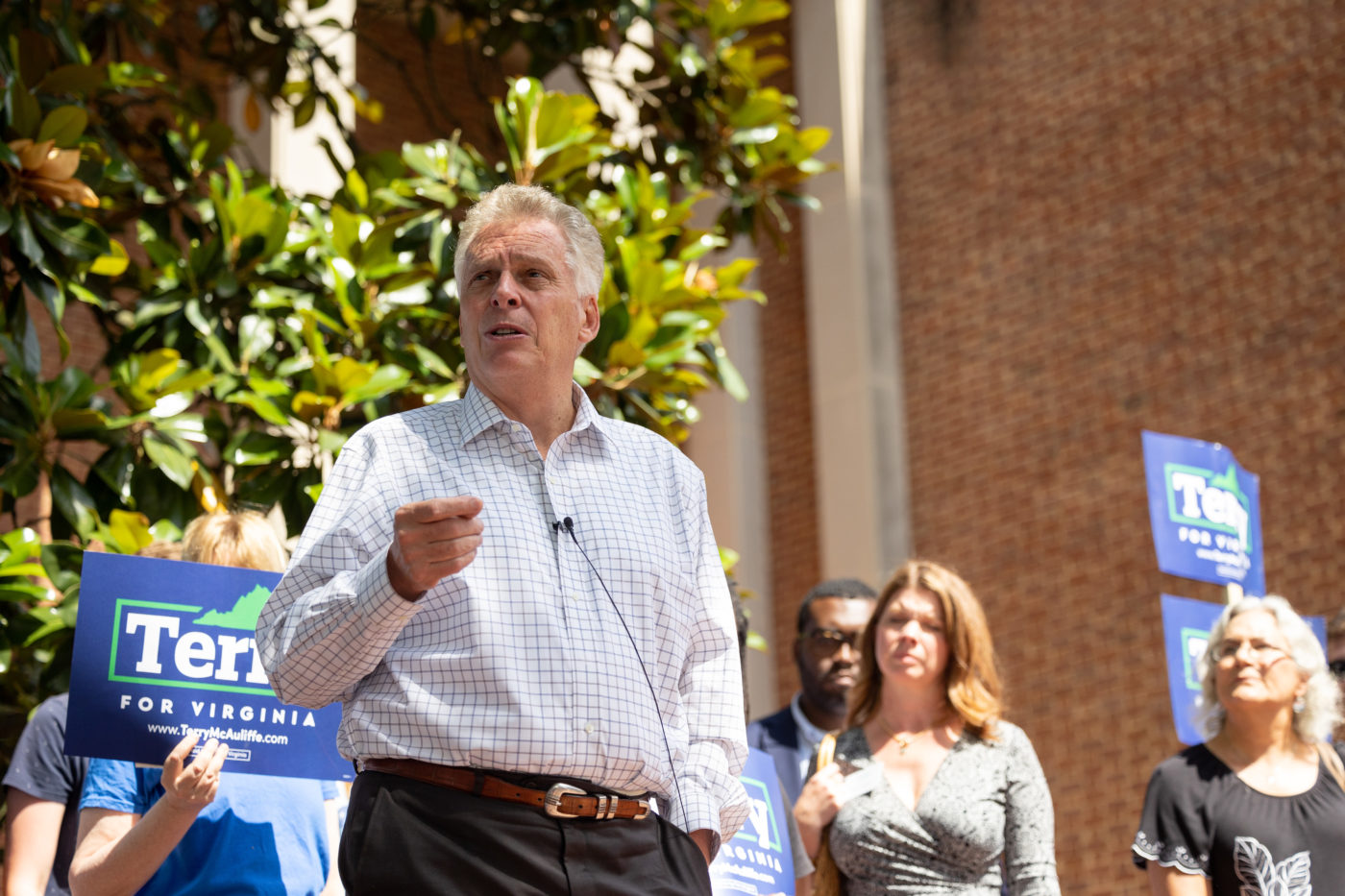 Terry McAuliffe speaks to a crowd of supporters at a Charlottesville event ahead of the June 8, 2021 primary election.

Former governor Terry McAuliffe said he jumped into the already crowded governor race in December because members of the state’s Legislative Black Caucus said “we need you back.”

By May, the Republican Party had already established its statewide ticket which includes a Black woman for lieutenant governor. Meanwhile, the Democratic race includes two Black women, a Black incumbent lieutenant governor, and a white male state delegate who had all announced their gubernatorial candidacies sooner. Still, McAuliffe approaches the primary with support from several Black Caucus members and other officials around the state.

In asking for Virginians to choose him a second time, he points to not just his experience but also his policy plans.

The 2021 gubernatorial election falls amid a pandemic that has highlighted existing inequities for Black and brown Virginians along with renewed calls for criminal justice reform. It also falls behind a presidential election — often a bellwether of red or blue waves.

Charlottesville Tomorrow spoke with the former governor following a Get Out The Vote event in Charlottesville on June 4. As Virginia is the only state that does not allow governors to serve consecutive terms, if re-elected, McAuliffe could become one of few elected more than once.

He cites Medicaid expansion and criminal justice reform as two things he wishes he could have more broadly accomplished in his first time — often railing against a then Republican-controlled legislature.

“I would have gotten rid of the death penalty,” he added,.

During his first term, he oversaw three executions; abolition of the death penalty was not yet state law. The legislation was accomplished this year under the administration of current Gov. Ralph Northam and a Democrat-controlled General Assembly.

Also during McAuliffe’s term as governor, Charlottesville became infamous as images from the deadly Unite the Right rally flashed across screens worldwide. McAuliffe later came under fire after Charlottesville residents, other counter-protesters and journalists noted errors and omissions in his book recounting the events that took place during what was dubbed the “Summer of Hate.” Calls were made for him to donate funds for survivors’ recovery funds. By August 2019 Charlottesville Tomorrow reported that he planned to donate proceeds to survivors alongside the Virginia State Police Association.

At the Charlottesville event ahead of the June 8 primaries, McAuliffe reflected on his call to then-president Donald Trump to decry the violence of the white supremacists and neo-Nazis that had descended upon the city. McAuliffe promises to keep standing up to hatred.

“I begged him to come out and condemn the folks who were here,” he said. “I begged the president to specifically come out and say ‘neo-Nazis’ and ‘white supremacists’ and tell them to get out of here. He promised me he would, and then five hours later he came out and said there were good people on both sides.”

While in office from 2014 to 2018, McAuliffe utilized his authority as governor to veto more than 100 bills, to include preserving women’s clinics and LGBTQ+ rights within the state. Utilizing executive orders, he accomplished things like restoring voting rights to thousands of formerly incarcerated people.

He also aims to enhance the use of body-worn cameras for law enforcement officers, invest revenues from the forthcoming legal cannabis market towards communities that have been most impacted from its enforcement — which studies have shown have disproportionately been Black and brown communities. Though McAuliffe previously restored voting rights to formerly incarcerated people, it’s not yet permanent state law, and he promises to support the state legislature’s efforts towards automatic restoration upon completion of sentences served.

Energized by the potential for the state to hold onto its Democratic majority, he’s drafted detailed policy outlines.

On affordable housing — a complex and popular discussion in Charlottesville — McAuliffe plans to invest in the Virginia Housing Trust Fund to help increase housing supply where needed in the state. He plans to “combat the historic effects of redlining” by ensuring resources are accessible to Black homeowners and renters as well as create a task force that will identify regulatory or zoning issues in localities in order to help streamline processes and create more affordable units.

On what sets him apart from his opponents, beyond having previously been a governor, he said can be his education plans.

“I think I have the biggest, boldest education plan — raising teacher pay, pre-K for 40,000 3- and 4-year-olds, and getting everybody access to online connectivity is a really big issue,” McAuliffe said.

His education plan entails investing $2 billion into the state’s education system annually — including a program that would cover college tuition at a state public university or historically Black colleges for aspiring teachers who commit to five years of teaching in public schools. The program is named for Harrisonburg native, Lucy Simms, who was enslaved before becoming a teacher. He also plans for expanded pre-K accessibility that can help working parents and bolster early childhood education with goals to lessen achievement gaps.

On the economy, McAuliffe draws a parallel to having taken helm of the state and inheriting economic issues due to cuts in federal spending from the federal government at the time with the impact COVID-19 has had on many Virginians.

“I just tell people, ‘Go look at our plans, you make your decision,’ but I do think experience [is important], because I did walk in with the largest deficit because of sequestration and the great recession,” he said.

The former governor said he will support entrepreneurship and workforce equity, along with supporting clean energy sectors and expanding broadband infrastructure. Bipartisan support has grown in recent years surrounding broadband as officials have noted the connections between education, healthcare and business. McAuliffe also notes this impact on rural communities.

McAuliffe will work to prevent employers from asking prospective hires about past salary to help prevent salary disparity and plans to work with the General Assembly and the state’s business communities to accelerate the state’s current efforts to raise minimum wage to $15 per hour.

He also plans to support small businesses in the state through the creation of a revolving fund to offer low-interest loans to small businesses and to build on his previous partnerships with community colleges and technical schools to bolster job training opportunities for people.

“I rebuilt a new Virginia economy. We’re gonna have to do that again because of COVID. We’ve lost jobs since COVID started here in Virginia. So coming back in big and bold is why I say the Black Caucus came to me and said, ‘We need to you come back again.’”