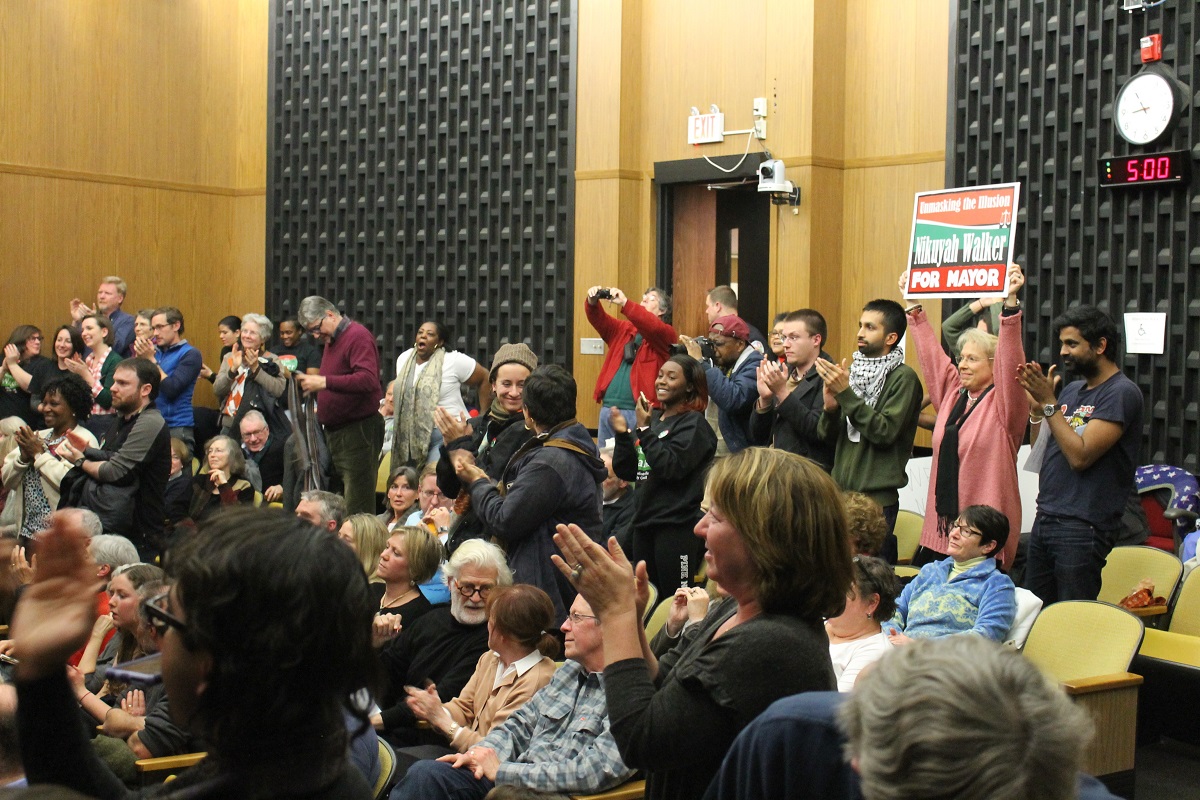 Walker selected as Charlottesville’s next Mayor after public discussion

Some say politeness insignificant compared with need for change

Since the deadly Unite the Right rally Aug. 12, locals have come before Charlottesville’s City Council to demand answers about the summer, air their grievances and press for change from their government. Over the past six months, meetings have been punctuated with screaming matches, confrontations, calls to order, and even arrests.

In response, some councilors and members of the public are calling for a return to civility in Council Chambers. Other people are challenging the notion of civility as a goal, suggesting that focusing on decorum has not worked so far, ignores deeper issues, or even masks them.

“I don’t want to return to so-called civility,” Jalane Schmidt, a Charlottesville resident, associate professor at the University of Virginia and Black Lives Matter activist, said in an interview. “I want to go forward into a space where the conversation has been opened, especially to people who were previously excluded or out of the picture.”

At the first City Council meeting of 2018, three members of the public spoke about the need for civility.

Let’s call it what it is —
it’s intimidation by
an angry mob.

“My hope for 2018 [is] that our meetings settle down so that our councilors can get something done,” said Virginia Daugherty, a former mayor of Charlottesville. “It’s hard to make decisions when people are shouting and name calling. To make decisions, you have to be able to think.”

Those who criticize the current atmosphere and behavior at council meetings cite people booing and drowning out councilors and others, shouting specific insults and disrupting business to the point of recesses being called.

The current rules include no cursing, no interrupting and no exceeding the three-minute speaking limit during public comment time held at the beginning and end of meetings. The council also follows Robert’s Rules of Order.

Charlottesville resident Jim Hingeley, who has earned the nickname “Mr. Civility,” has repeated his pleas for order. He referred to a meeting in December when Jason Kessler spoke, was heckled by the audience, exceeded his speaking time, and was escorted out by police for breaking the rules.

Kessler is the white nationalist and main organizer of the Unite the Right rally. Just after Kessler left, Charlottesville resident Mary Carey spoke beyond her time limit and also was told to leave by a councilor, but was defended by the public and allowed to stay after a meeting recess.

“Let’s call it what it is — it’s intimidation by an angry mob,” Hingeley, the former head of the area’s Office of the Public Defender, told the councilors. “Council trampled on the First Amendment by content-based discrimination,” he added, arguing that the council must apply the law to everyone impartially so that no one fears speaking at the meetings.

During Hingeley’s remarks, the audience laughed, booed and called out, “You’re defending a murderer,” “No civility for white supremacists,” “We’ll intimidate every one of them,” “You’re at the wrong meeting,” “Cry me a river,” “Poor babies,” and “We have some reading for you.”

Of the councilors, Mike Signer and Kathy Galvin received the loudest and most frequent interruptions from the audience Jan. 2 and both addressed the climate in the room.

“I’ve got to be able to finish speaking here. This is in gross violation of the rules,” Signer told the room, calling the interruptions “bullying.”

Galvin said the catcalls and insults that followed her every word made an honest, careful conversation about selecting the next mayor difficult.

According to resident Carole Thorpe, who served as chairwoman of the Jefferson Area Tea Party, the City Council has a history of enforcing rules unequally. During the Occupy Charlottesville movement in 2011, she describes the council “bending over backwards” to allow an encampment protest because she said the movement had the council’s support. The Tea Party never received such treatment.

Thorpe sees parallels between treating groups differently during the Occupy movement and the current situation in Council Chambers.

“It does seem to be a double standard. If you’re a progressive or a liberal or one of the politically favored to City Council, you get every courtesy, you get every warning, you get everything. But if you are a conservative person, for the most part, that doesn’t happen,” Thorpe said in an interview.

“It’s a very small room. So 30 or 40 people can make a heck of an impact chanting and holding signs and waving signs and going up on the dais. That’s very intimidating,” she said.

Thorpe said every person should be held to the same standard in terms of civility.

“No matter how outraged you are, or how justified you are in your outrage, I do think that society has the right to expect a certain level of maturity in your discourse,” she said. “We have a responsibility in setting an example for students and for young people of how adults should comport themselves in public. And this, I think, has been a circus.”

Challenges to ‘a return to civility’

Not everyone in Charlottesville advocates for civility in Council Chambers.

“New year, new rule,” Dave Ghamandi, a Charlottesville resident, said during public comment at the Jan. 2 council meeting. “White men can’t preach civility when we live in a settler colony, on land where they exterminated the indigenous population and enslaved millions of blacks.”

Ghamandi’s words received snaps, claps and shouts of support from the audience.

Councilor Wes Bellamy suggested that when individuals express themselves differently from others, it does not mean they are wrong, unworthy of empathy, or in need of a lecture.

Bellamy added that while some of his friends and others whom he respects claim to want things to go back to “normal,” his reply is this: “There is no returning back to normal” — but there is a way to move forward.

“If we’re here to make the entire city better, it’s time that we start looking out for the people who have not received what they need in order to feel equitable and equal here in our community,” Bellamy said.

So you’ve got to ask yourself the question: Are you asking me to be civil so that you can control this discourse?

Newly appointed Mayor Nikuyah Walker did not talk about civility explicitly, but about genuinely listening to everyone, especially those previously denied access to places like Council Chambers.

“When I’m in a meeting, I am thinking first about everyone that has been excluded from those places for so very long,” Walker said. “For us to move forward, people have to be willing to let go of what they know to be true and actually be open to the challenge of learning something new.”

One of the criticisms leveled at those who break the rules is that such behavior prevents councilors from getting through business.

With the exception of the Aug. 21 meeting, which was turned into a town hall after the public took over, Bellamy said the council has never failed to get through necessary business.

“I think that the response of the people to their council is appropriate,” Douglas said in an interview, adding that she is not making a statement about the ways people should treat each other, but that the protest tactics at council meetings are historically in keeping with social movements across the country.

“Go back and look at any one of those movements that push us to actual change in America and look at their tactics,” Douglas suggested, pointing to ACT UP and Occupy movements. “It’s exactly the same.”

Change cannot happen without discomfort, without accepting that people are angry and have the right to be angry, she said.

“What is not possible about you accepting that when I talk to you, I am angry? Why must I not be angry so that you can feel comfortable?” Douglas asked.

“What really is necessary are some moments of analysis and some moments of strategic thinking, and not this constant emotional cry for civility as if that is going to solve everything,” she added.

Douglas called the motive for civility questionable. Because civility is subjective, it lives in a place of control and can be redefined at will.

“So you’ve got to ask yourself the question: Are you asking me to be civil so that you can control this discourse?”

Local resident and attorney Jeff Fogel’s first response to calls for civility is that the social and economic problems leading people to be uncivil are much more obscene and important to address than whether people are polite when they speak about them.

“Big issues having to do with race and economic disparities in town [have] been allowed to fester for decades without anything significant being done. And that was done very politely and with lots of courtesy,” Fogel said in an interview.

From Fogel’s perspective, the City Council lacks true engagement with the public. The current meeting rules allow citizens to talk at their councilors, but doesn’t ensure that councilors listen, and offers no room for dialogue or exchange.

Some of the critical issues Fogel sees Charlottesville facing are the redevelopment of public housing, a “living wage” and reform in the police department.

“There’s a new recognition of the need for these things to happen,” he said. “I think some of it has come as a result of some of the uncivil activities of people in Council Chambers, because usually when you see someone as agitated as that, it’s a function of how strongly they’re feeling.”

“I have no energy for this talk of civility,” she said. “It masks a very uncivil situation that has persisted for centuries.”

Schmidt said systemic racism and economic inequality mean that many people suffer every day in Charlottesville, and adhering to a culture of Southern politeness and the council’s three-minute limit for each public speaker will not solve disparities.

Schmidt would like to see more transparency, more forums with elected officials really listening, meeting agendas reflecting issues facing the public, and progress on affordable housing for the city.

Schmidt believes that most people advocating for civility have had the advantage of more engagement with elected officials through campaign donations, lunches on the Downtown Mall, or other avenues of connection.

“They’ve had more than their three minutes,” she said. “They have hours, and it’s off the record, and it’s not transparent.”

“I’m hard pressed to think of other places where there’s this level of passion. People are watching the agenda and showing up and making their voices heard. That’s a good thing,” she said.

As Schmidt put it, if calls for civility are like people complaining about a noisy fire alarm down the street, the people doing the yelling in Council Chambers are the people inside the burning house.

If everyone agrees on one thing, it seems to be the necessity and chance for change with the new year and new council.

“We can, together, change the tenor of our shared space,” Councilor Heather Hill said at the Jan. 2 meeting.

Councilors have heard the widespread desire for new rules and more community engagement. A public hearing on meeting structure and procedures will be held at the council’s meeting Tuesday evening.