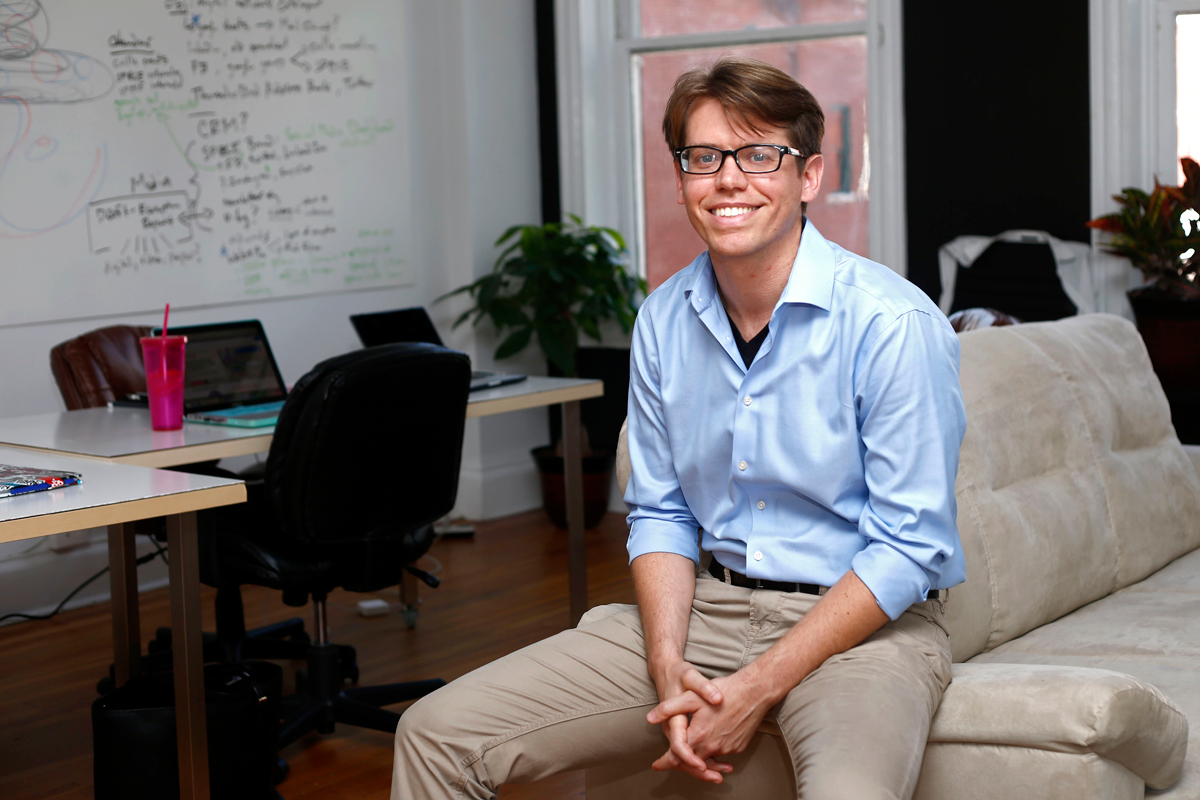 Tim Miano, founder and CEO of sp@ce in his office on the Downtown Mall.

As startups nationwide and in Charlottesville clamor for adequate workspace central to housing, culture, shops and amenities, localities are building and planning business districts that focus on tech- and innovation-centered small businesses.

Charlottesville Mayor Mike Signer has expressed the need to foster an innovation ecosystem — a culture that nurtures and celebrates small and medium-sized ambitious companies, and supplies ample fallback options for their employees.

Research by the Brookings Institution has found a shift away from car-accessible suburban office parks to walkable, bikeable spaces central to culture and housing.

A centrally located innovation hub is critical to the success of the innovation economy in Charlottesville, said Tim Miano, founder of sp@ce, a Downtown Mall-based company that seeks to build such a district.

“[This] is purely the result of market demand,” Miano said. “Millennial digital native workforce people, people entering the workforce today, they want an urban environment, both for cultural and aesthetic reasons and for economic reasons.”

But there’s a problem. Charlottesville does not have an existing warehouse district, which rules out repurposing old commercial structures to suit startups, and the University of Virginia’s research park is too far from downtown to foster the culture that feeds innovation economies.

That necessitates building a new space central to downtown, but banks are often loath to make loans to small, cash-poor companies that might not survive.

The solution, Miano said, is large, credit-worthy anchor tenants who are willing to share space with smaller companies, and investors who don’t mind waiting a long while to see returns.

“It does make rational business sense in the long term,” Miano said. “From either a for-profit or not-for-profit perspective, as an investor, having a thriving innovation ecosystem actually does grow the pie.”

The idea also means bringing more people to downtown — as many as 3,000 more by Miano’s estimate.

That’s a big number, but Signer said he thinks a bustling innovation hub can coexist with Charlottesville’s small-town aesthetic.

Signer also pointed to the success of local companies such as HemoShear, Apex Clean Energy and WillowTree Apps as indicators that the two aesthetics can coexist.

“You don’t want to lose the unique characteristics of the town in the name of progress,” he said. “I think our town is sophisticated enough to see past that and I think we can totally blend the two.”

The innovation space itself, Miano said, would need to be in the neighborhood of 150,000 square feet, with a portion designated for small companies to set up “like kiosks in a mall.”

Those spaces would rent below market rate, which would mean investment returns would come in a five- to 10-year timeframe, as opposed to the traditional three, Miano said.

Return on investment and risk management are big, but not insurmountable, challenges, Noll said.

“It is securitizing debt that is the tricky layer that a lot of folks can’t get over,” Noll said. “To securitize debt, you need to have folks paying rent. Startups are generally broke. Their capital is all tied up in research and development, and they don’t have a lot of reserves.”

A strong anchor — such as an established company, a government agency or a department of UVa — is a step to reducing risk for investors and banks.

Eventually, Miano said, municipalities, UVa and businesses all will have to buy in to building a strong startup and innovation ecosystem.

“This is the economy of the next 20 years. This isn’t going away, it is not a fad — startups are not a fad,” he said. “This is the new reality of the U.S. economy.”

Making the innovation district a reality will take support from more than just the local government, Signer said.

“We can always improve, and I agree with many stakeholders who believe that an innovation district and related incubator/accelerator could be key to taking our technology ecosystem to the next level,” he said. “Recent conversations with UVa have been particularly helpful in developing that vision.”

Universities in more densely populated urban centers have a leg up on UVa, Miano said, because they have more opportunities for graduates, more space for offices and affordable housing.