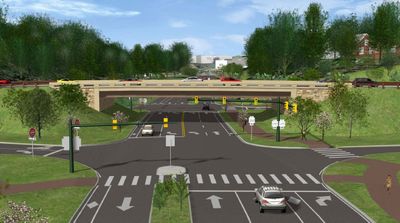 Construction of the Meadow Creek Parkway’s interchange with the U.S. 250 Bypass will begin later this year, now that Charlottesville officials are in negotiations with a firm to build it.

A Warrenton-based construction firm has submitted the lowest bid for the project.
“The city is working diligently to confirm and accept the apparent low bid submitted by General Excavation Inc.,” said Jeanette Janiczek, the city’s urban construction initiative manager.
The firm’s bid was $20.4 million, which Janiczek said was within 1 percent of the construction estimate for the project.
However, a contract for the project cannot be immediately awarded.
“The process will take about two months to analyze bid information, process through state/city departments, and negotiate and execute contract,” Janiczek said.
Once the award has been confirmed, the city will be hosting an open house to introduce the contractor to the public.
General Excavation also has worked on construction projects at the Charlottesville Albemarle Airport and bridge replacements in Page and Warren counties.
Janiczek said that both the bypass and McIntire Road will stay open throughout construction of the interchange. The city will conduct a campaign to keep drivers notified about lane shifts and other traffic pattern adjustments.
“The interchange will be the final project in a long line of transportation improvements being constructed in the immediate area,” Janiczek said. “[These are] a new pedestrian bridge over the railroad tracks linking McIntire Park east and west, a trail and road system created by Meadow Creek Parkway and McIntire Road Extended and the new master plan for McIntire Park.”
Construction of the grade-separated interchange is scheduled to be completed by July 2, 2015. When the project is finished, the bypass will travel over the existing intersection and vehicles will not have to stop at a traffic light. Access to and from the bypass will be via a pair of signalized intersections that will enable pedestrians to safely travel to McIntire Park.
Meanwhile, the city’s parks and recreation department is preparing a nearby location to become the new home of the McIntire Skate Park.
“We won’t be moving the ramps until toward the end of February,” said Brian Daly, the city’s parks director.