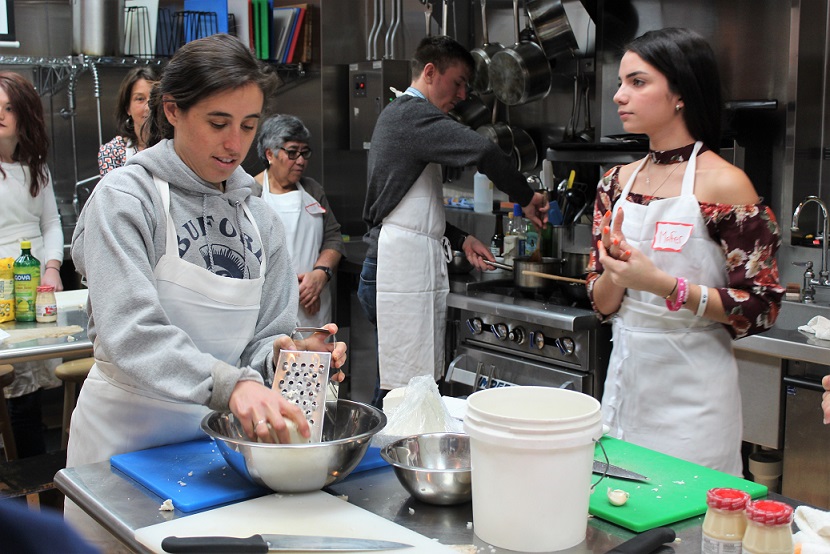 The Venezuelan cooking lesson was part of Bridges Through Bread, a community engagement program introduced by Albemarle County Public Schools this year. The monthly international cooking classes are led by families who are English-language learners and new immigrants, including refugees.

Previous Bridges Through Bread classes have been taught by families from Nepal and Afghanistan. The next will feature Egyptian cooking.

Renata Germino, a specialist in Albemarle’s English for Speakers of Other Languages (ESOL) program, said the school division’s enrollment includes students from 95 countries.

“With these classes, we are trying to recognize and celebrate these rich and diverse cultures,” Germino said.

“[Immigrant] families have to overcome a lot of barriers to get here,” said Laura Brown, Student Support Team Leader for the ESOL program. “This class is a way to put them in a leadership position.”

Bridges Through Bread is being piloted at Albemarle High School, Jack Jouett Middle School and Greer Elementary School, with the goal of bringing the program to other schools in the future.

January’s cooking class was taught by Maria Isabel Gil and her daughter, Maria Fernanda “Mafer” Salazar Gil, who moved to Albemarle from Barquisimeto, Venezuela in 2016.

Mafer, a junior at Albemarle High School, quickly learned English and is no longer taking ESOL classes. “I started talking with people, and I realized that English is not as hard as people think,” she said.

Mafer said she hopes to follow in her grandfather’s footsteps and study architecture after graduating from high school.

The cooking class began with a brief Power Point presentation about Venezuela. Mafer gave an overview of the country’s major cities and natural landmarks like Angel Falls, the world’s highest waterfall.

She also spoke about the political and economic crises currently affecting Venezuela. The country is experiencing dramatic shortages of food and medicine, driven by the severe inflation of its currency. These circumstances motivated more than 1 million Venezuelans to participate in protests against President Nicolas Maduro’s government last year.

“Venezuela has been having hard times lately,” Mafer said. “I never knew the Venezuela that my mom knew when she was growing up.”

“Many people [in America] don’t know anything about Venezuela, and if they do it is only the bad things that are happening there,” Maria said. “There are good and beautiful things there, too.”

Participants in the class learned how to make two kinds of arepas: one with black beans and queso fresco, an unaged soft cheese; and “La Reina Pepiada,” a chicken and avocado-filled sandwich named in honor of a Miss Universe pageant winner from Venezuela.

Martha Stafford, owner of the Charlottesville Cooking School, said she was amazed by how effortlessly Maria and Mafer could shape corn flour into perfectly rounded arepa cakes.

“You can read about it, or watch someone do it on YouTube, but seeing someone from that culture make them right in front of you is the best way to learn,” Stafford said.

After the cooking was done, everyone at the class gathered around a table and enjoyed a communal meal.

Germino said that she and other ESOL teachers extend invitations to Bridges Through Bread classes to school office employees, bus drivers, support staff and colleagues at Charlottesville City Schools.

“We are bringing together people who don’t have a chance during the busy school day to stop and talk to each other,” Germino said. “It’s a chance to learn about other people’s lives, the challenges they are facing, and their strengths.”

Bridges Through Bread is fully funded this year by a $5,500 Social and Emotional Learning Grant from Education First and the NoVo Foundation.