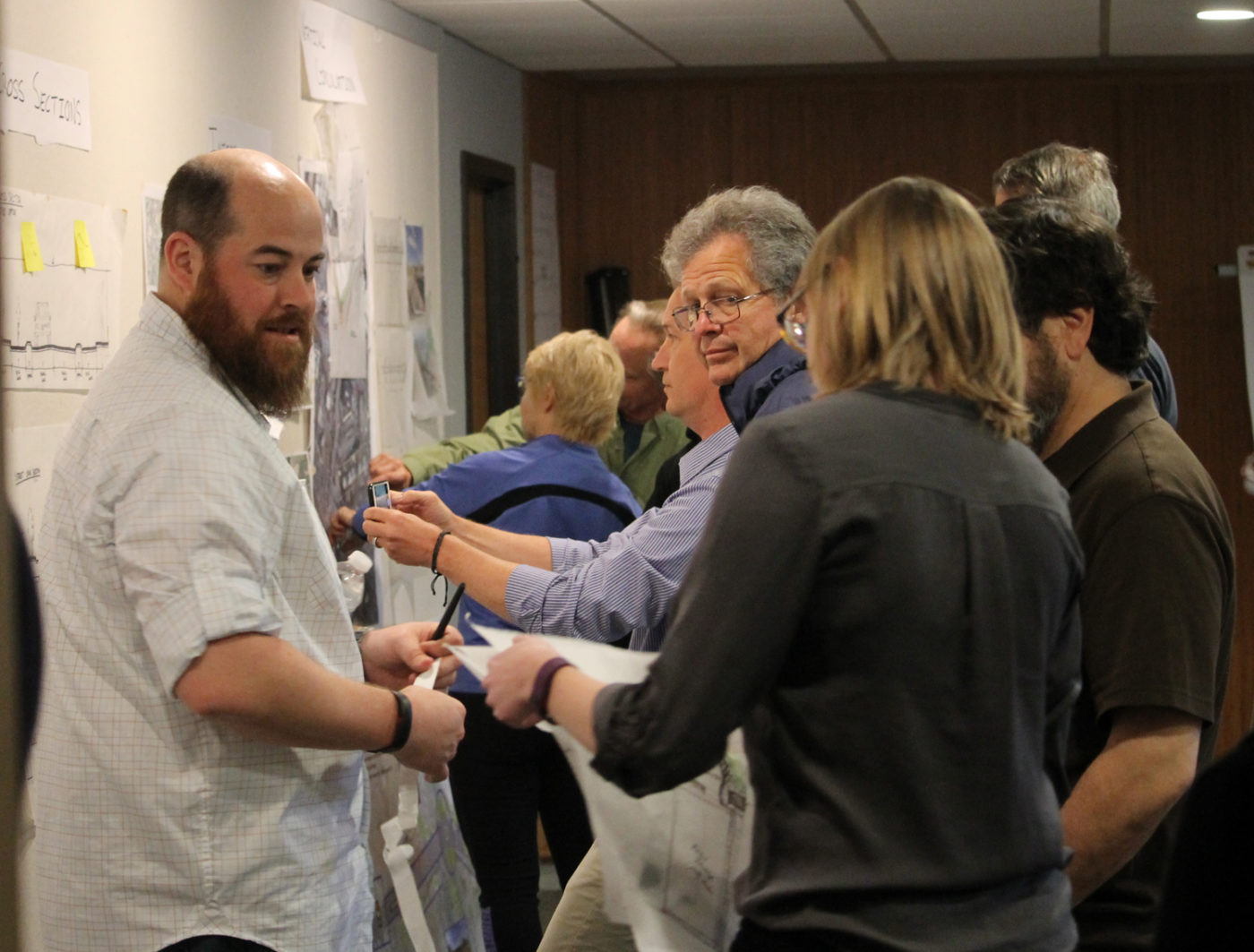 The firm designing a replacement for the deteriorating Belmont Bridge has concluded three days of intense planning for the structure.

“We have had wonderful weeks in Charlottesville, and the last three days have been impressive,” said Sal Musarra, with Richmond-based Kimley-Horn.

City Council voted in the summer of 2014 to proceed with a bridge replacement rather than an underpass. The city entered into a $1.98 million contract with the firm in December after an extensive negotiation period.

The current bridge was built in 1961 and has a sufficiency rating of 40.9 out of 100, according to city officials. The total budget for the replacement is about $23 million, including $14.5 million in previous allocations from the Virginia Department of Transportation. Charlottesville has applied for a VDOT revenue-sharing grant of $4.5 million, which will require an equal match from the city’s general fund.

The final event of the design charrette Wednesday was a “pin-up,” where various sketches created during the planning session were placed on the walls of CitySpace. More than 40 people attended to see the interim results, many of whom were residents of the Belmont neighborhood.

“The process has had its high points and low points,” said Erin Hannegan, of the Belmont-Carlton Neighborhood Association. “I haven’t seen as much engagement as I’d like from my neighborhood. I think a lot of people are burned out, but the team here is really open and I hope that entices more people to come back into the effort.”

Musarra said the team will now return to their offices to refine the concepts in order to produce a more complete project for an open house in CitySpace on June 1.

“The final design is not hanging on the wall right now,” Musarra said. “The idea is to have a solid design process that is transparent so in the end we can feel good about the result even if we don’t all agree 100 percent on the design elements.”

The council’s design criteria envision for a bridge with a 25 mph limit and one vehicular travel lane in each direction. The design was to be innovative and entertaining and would separate pedestrians and bikes from motorized vehicles.

Over the past eight weeks, the design team has done a lot of work, including completing a field survey, beginning geotechnical work, as well as holding a mobility summit. Nearly 900 people have responded to a survey on the bridge.

Musarra said common themes from the survey include improving safety for all users, improving connectivity, improving intersections and approaches and creating public spaces in and around the bridge.

“The intersections are really the key issues in terms of handling traffic, moreso than the width of the bridge or the number of lanes,” Musarra said.

Brian McPeters, an engineer with Kimley-Horn, showed off various cross-sections of the bridge and said that the city’s Streets That Work initiative had provided guidance.

“The proposed bridge cross-section is two travel lanes with one in each direction with 20 feet of bicycle and pedestrian space,” McPeters said, adding that intersections act like faucets that control movement through additional streets.

In March, the steering committee charged the team to design a shorter bridge and to find additional parking to replace the 53 spaces that would be lost underneath the new structure.

Musarra said parking could be solved through redevelopment of several properties in the vicinity that are currently vacant. He said the rising cost of land in Charlottesville means that those sites will eventually be transformed into a different use.

The bridge will be about half the size of the current 440-foot-long structure with three spans of less than 80 feet each.

“There are a lot of reasons for this, including cost,” Musarra said, adding that money not spent on the bridge could be used to pay for amenities desired by the community.

He said the new bridge could come with new opportunities, and he recommended a new block structure on the southwestern section of the study area where future buildings might be built closer to the street.

Musarra acknowledged that many of these lines were drawn on private property but that the charge of the study included finding ways to increase the area’s urban form.

“There are long-term visionary opportunities,” he said. “You need to look at these areas in a broader perspective. The way you make that is through collaboration.”

For instance, the site of the former Better Living building on the corner of Garrett and Avon streets could become a future mixed-use site.

“A project like that could be a catalyst for other things to happen in the area,” Musarra said.

Musarra said existing pedestrian connections are not safe, such as the mid-block crossing on the southern approach. That might be replaced with a pedestrian underpass instead, an option that will be studied further as the conceptual design is further refined.

The project will need to get the endorsement of the Planning Commission and the Board of Architectural Review before going to the City Council for approval in the fall.

After that, engineers will create construction documents for the project so it can be put out to bid sometime next year.

Hannegan said the design will be a key to the future of Belmont.

“It’s going to set the tone for development of the base of the bridge, the Strategic Investment Area and any redevelopment that ends up happening on the northern end of Belmont,” she said.