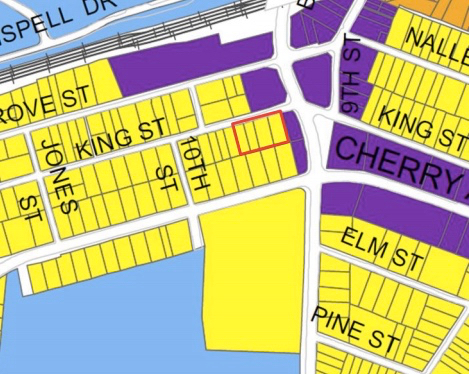 A change of zoning on King Street could lead to more business development in Fifeville, a Charlottesville neighborhood home to many University of Virginia employees.

At Tuesday’s Charlottesville Planning Commission meeting, Atlas Projects proposed that four lots in the 900 block of King Street be changed from residential to mixed-use, which would allow for both residential and commercial development.

Approved by the Commission, the current plans include a mixed-use building on the combined lot at the corner of King Street and Roosevelt Brown Blvd, with both apartments and commercial components. The .56 acre area currently contains three vacant lots and one unoccupied single-family home.

“This location in the city is where one can imagine the increase in density, the increase in growth, that is so clearly asked for in the comprehensive plan,” said Oliver Platts-Mills, developer for Atlas Projects. “It feels difficult today to stand in that site and imagine single-family houses going back up where they’ve been taken down.”

Platts-Mills is on the board of directors of Charlottesville Tomorrow.

A community meeting was held April 8 at Tonsler Park to present the plans, which were met with mixed responses from the eight attendees. Some noted the area was underutilized and in need of a mixed use development to stimulate the neighborhood, while others felt the development would only serve to further gentrification.

Joyce Hillstrom, a resident of King Street, said she is in full support of the project.

“The last thing I know that anyone wants to see is three huge homes going up there,” Hillstrom said. “We want something mixed-use. We want something that local people can take part in and be proud of and can be neighbors with. We want to have more neighbors there whether they’re long-term or short-term.”

King Street is currently one-way, raising the issue of car backups if more occupants take up residency in the proposed mixed-used building. The solution, according to Platts-Mills who spoke with a city traffic engineer, would be to convert it to a two-way street. But some are unsure that the solution will be that simple.

“We are very concerned about traffic and I’m not sure if a two-way street is a good idea or at least would be helpful at that point,” Gary Funston, a Grove Street resident, said. “I’d like to see the project proceed with just as much attention to that as possible, especially access to Roosevelt-Brown from both King and Grove.”

In addition to the issue of traffic, commissioners were concerned about the possibility of a hotel on the lot after a zoning change. Although one of the proffers provided by Atlas ensures a hotel built can have no more than 30 rooms, Commissioner Genevieve Keller was wary, citing previous instances wherein approved zoning changes resulted in unwanted development.

“We’re dealing with zoning category, R-1S [residential], which is one of the few things that is keeping a number of our neighborhoods owner-occupied… and somewhat affordable,” Keller said. “I’m not sure if at this point in time I’m comfortable with moving ahead with no more assurance than we have, that this project will go the way we saw it envisioned.”

Platts-Mills assured those at the meeting that Atlas Projects was not interested in building a commercial hotel and inserted the proffer dictating a room number limitation to ensure no hotel would be built. Not wanting to eliminate future opportunities for a combination short-term and long-term rental building, technically classified as a hotel, the proffer did not preclude all hotel uses.

In response to fears of a large apartment building out of character with the existing residential neighborhood, Platts-Mills pointed out that surrounding lots are already zoned as mixed-use lots, meaning large buildings could be erected on those properties.

One of those lots with a previously approved mixed–use plan has since been acquired by the University of Virginia in 2016.  Brian Hogg, the non-voting commissioner who represents the University, says there are no plans in place for the land.

No members of Charlottesville City Council attended the joint public hearing.  As a result, when they review the King Street proposal at a future meeting another public hearing will have to be held.