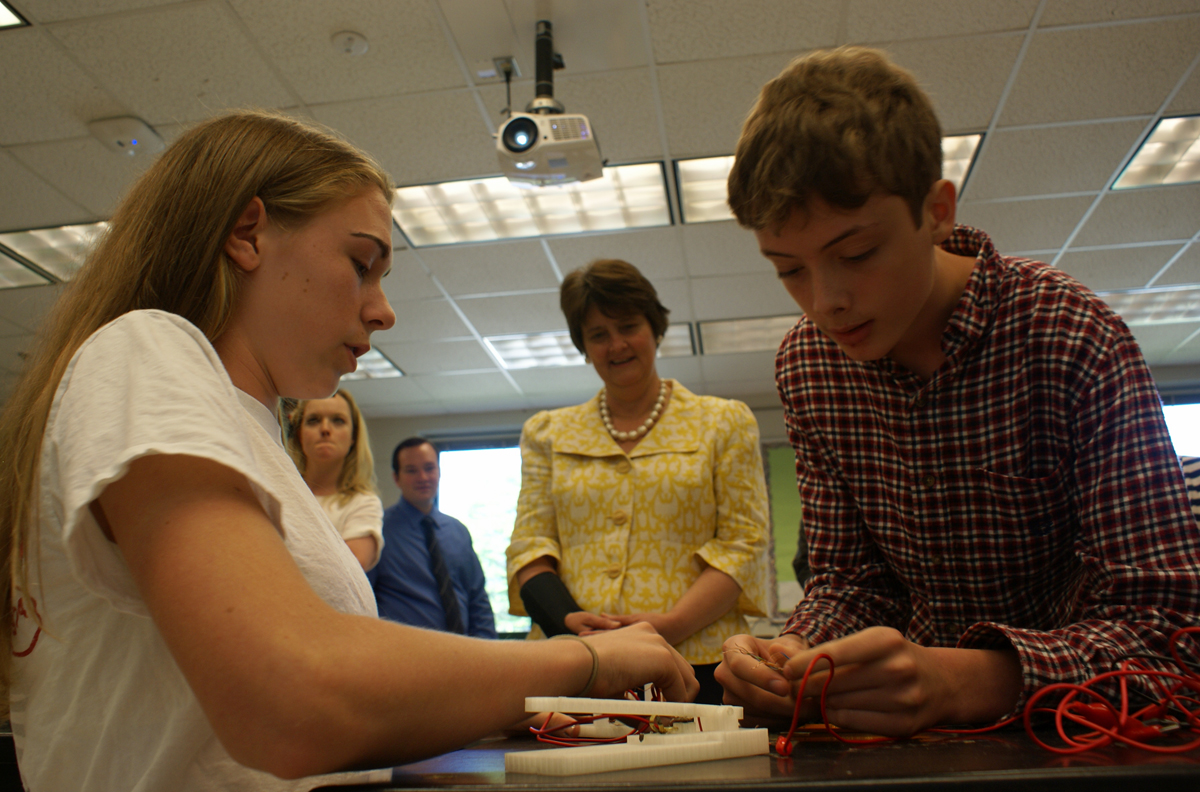 Thanks to some innovative teaching, students in Charlottesville City Schools and Albemarle County Public Schools may have a leg up on the jobs of the future.

Now preparing for its second year, the Commonwealth Engineering Design Academies—a partnership between Charlottesville, Albemarle and the University of Virginia—is making strides to incorporate engineering into science class through the use of advanced manufacturing techniques, such as 3D printing.

“The teachers are taking a theoretical concept, which is to integrate engineering into science teaching, and they’re turning it into solid curriculum with concrete lesson plans and specific activities,” said Glen Bull, a professor at the UVa Curry School of Education.

Currently the Design Academies span schools in both divisions. The classes are held in the primary and secondary schools, and the collaboration relies heavily on faculty from the Curry School and from UVa’s School of Engineering and Applied Sciences offering professional development to area teachers.

And the engineering-infused curriculum, which has been recognized by the Smithsonian Institution and was recently featured on the PBS NewsHour, comes at a time of high demand for technology and engineering workers.

U.S. News and World Report recently reported that 2013 saw 5.7 million job openings in the fields of science, technology, engineering and math. Of those jobs, 2.3 million were entry-level positions that required less than two years of experience.

Many school divisions across the country would like to adopt a similar curricular model, but Bull said the hands-on activities take time the science curriculum can’t afford to lose. 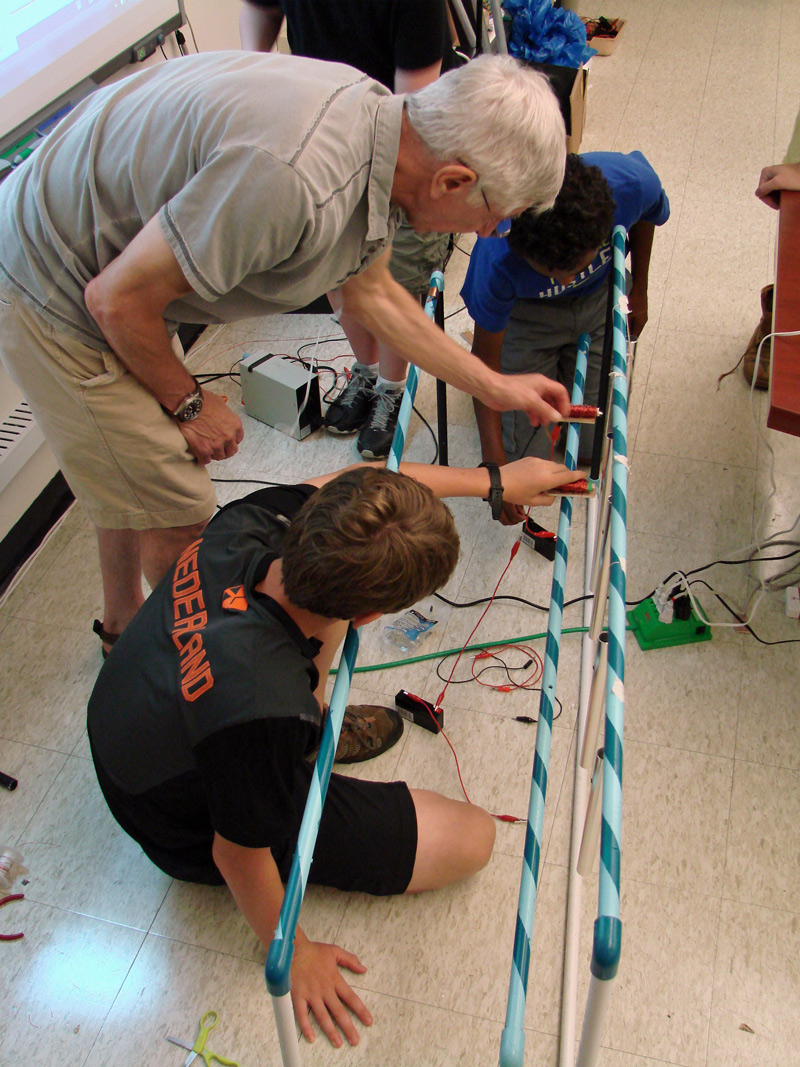 To get around these issues, the lab school pairs an engineering course with a science course. In effect, students learn the concepts in one class and apply them in a second.

What’s more, Bull said, is that they hope to learn what engineering training education schools can provide to future teachers.

“What we’re doing is basically working in a laboratory to learn how to do this best,” Bull said. “Once we understand what works in practice, we’ll use that to inform preparation at the Curry School.”

But Bull stressed the need to have students study existing inventions, and underscored the importance of not simply having students download schematics and print objects.

“A lot of the learning comes from the struggle to measure and analyze the existing invention, and then…to design your own version,” Bull said. “That’s what leads to the questions and inquiry where they actually have to apply the principles.”

Beling was one of a handful of students who this summer attended a two-week engineering session meant to inform the Design Academies’ curriculum moving forward. The group learned about how relays operate within electric circuits.

“We learned that they were used in telegraphs and we talked briefly about the history, and then we were able to make our own relay with Popsicle sticks, paper, screws and wire,” Beling said. “Then it evolved and we made 3D-printed relays.”

“The hands-on part of that allowed me to see the steps and how you sometimes have to go through a process to come up with an end product,” Beling added.

“At least I learn better when I screw something up and then I know it doesn’t work that way,” Bredder said. “That’s the struggle, not knowing where it’s going to fail right away, and trying to preemptively iterate as you’re teaching.”

But Bredder said the new instructional model asks a lot of teachers as well.

“Allowing a student complete freedom of a subject, for a teacher that’s never done that before, it’s kind of a scary thing,” Bredder said. “It takes a little bit of patience, but it’s exciting because the kids are excited because they want to do it because it means something to them.”

The teachers are not alone in their initial hesitance. Beling said the change in instructional style can be “starling at first” for a student.

“But I think it really does help,” Beling said. “I know I couldn’t have learned anything in the summer academy if there wasn’t the hands-on part. I couldn’t just learn from the book.”

For all of the Design Academies successes, first-year challenges also presented themselves.

Stephanie Grady, an engineering teacher at Buford Middle School, cited the order in which lessons are presented, as well as ensuring they had the appropriate amount of materials for a lesson, as kinks teachers and staff have worked on.

Additionally, gathering all of the teachers together with UVa faculty for professional development proved difficult.

“My classes don’t line up with the science teachers’, and Charlottesville schools have different times than Albemarle schools, so the functionality of all this isn’t a struggle, but it’s difficult,” Bredder said.

Eric Johnson, the principal at Buford Middle School, said that each day all of his science teachers have a common period of about 45 minutes to collaborate, which could be used to videoconference with County teachers and/or UVa faculty.

Chad Ratliff, Albemarle’s assistant director of instruction, said the scheduling difficulties weren’t unforeseen given the program’s first year, but said that he expects next year’s professional development opportunities to be better.

“We’re no longer organizing this in the same year of the program’s beginning, so we have more planning time,” Ratliff said. “This summer there will be three weeks of professional development at UVa for our teachers and a monthly program will be added throughout the new school year.”

“They’re really excited about it, and having the exposure in middle school I think is really opening the eyes of students to maybe engage in engineering later,” Grady said.

Beling said her interest has been piqued.