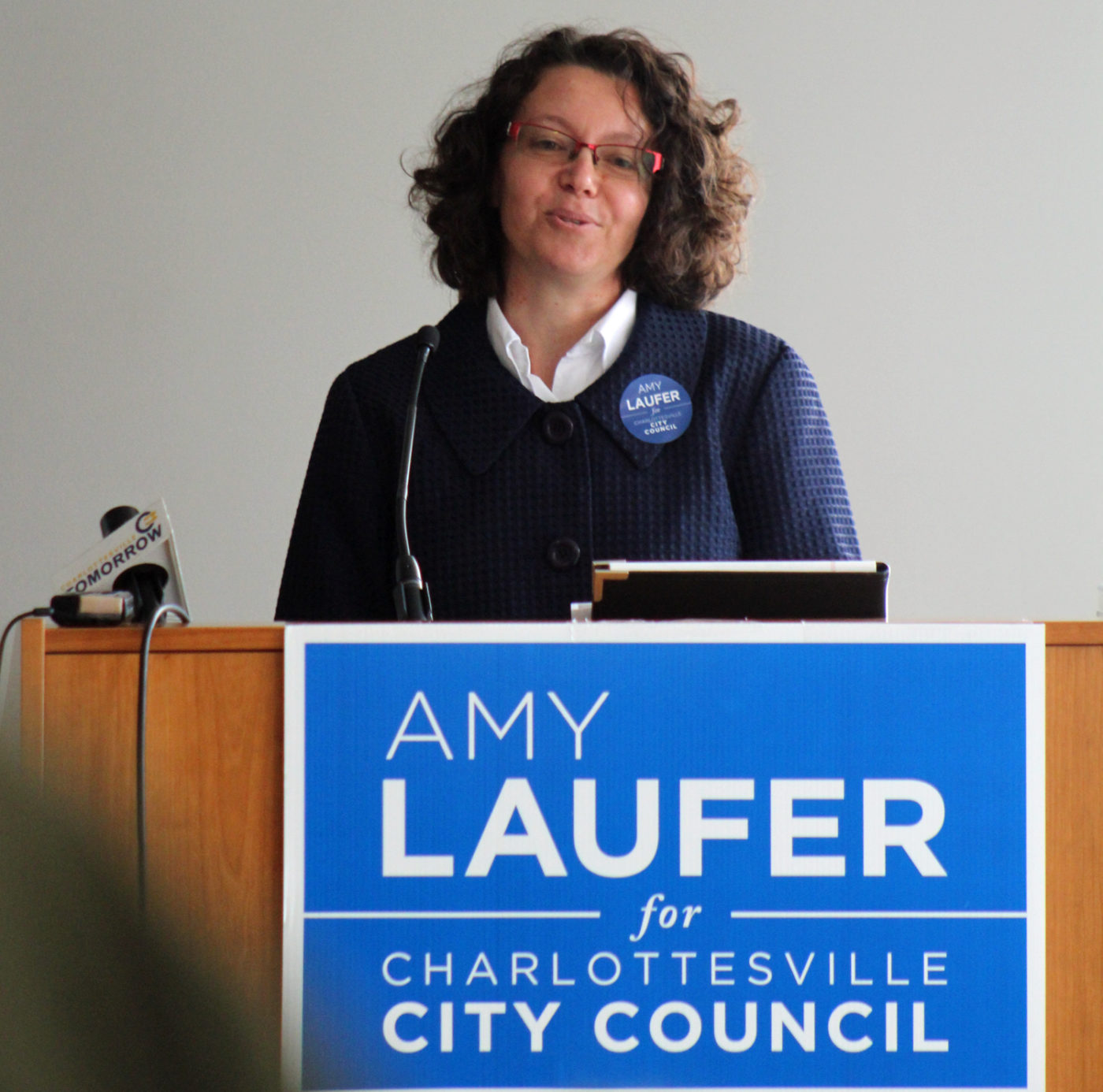 Amy Laufer at her campaign announcement in CitySpace

“Let’s continue to move Charlottesville forward in these uncertain times,” said Amy Laufer at a campaign announcement Tuesday. “I want us truly to focus on the needs of all of the community.”

Laufer, 44, was first elected to the school board in 2011 when she received the most votes of the seven candidates who ran that year according to the Virginia State Board of Elections.

School board elections are non-partisan and the top four candidates were elected.

Laufer was re-elected in an uncontested race in 2015.

The Council seats held by incumbents Bob Fenwick and Kristin Szakos are up for election in the Nov. 7 general election. Szakos has said she will not seek a third term, but Fenwick has yet to indicate his plans.

Laufer is the second Democrat to officially declare a candidacy for the party’s nomination. Heather Hill announced her campaign on Feb. 21.  Democrats will face off in a primary on June 13.

So far, no Republican candidates have emerged, according to Barbara Null of the Charlottesville Republican Committee.

One independent candidate, Stanford Dale Woodson, has filed paperwork to run for Council.

Another independent, Kenneth Wayne Jackson, has indicated interest in second run on Facebook but has yet to file with the registrar. Jackson placed fifth in the 2004 general election when he ran on the Republican ticket.

The group Equity and Progress in Charlottesville held a forum on Monday for potential candidates and campaign volunteers.

“There was lots of good energy in the room and I anticipate a few of the participants will be announcing in the near future,” said Dave Norris, a former Charlottesville mayor and member of EPiC’s steering committee.

Norris said EPiC will make its endorsements after an April city council forum. A date for that event has not been determined.

Laufer was introduced by one of her fellow school board members at her campaign announcement.

Laufer said she moved to Charlottesville after meeting the man who would become her husband while serving in the Peace Corps. Aaron Laufer is the owner of Laufer Companies, a commercial real estate company. The couple has three children in city schools.

Laufer has served two years as chairwoman of the school board and another two as its vice chairwoman.

Laufer said another accomplishment during her tenure has been the renovation of the science labs at Buford Middle School and Charlottesville High School.

“But the most important thing we’ve done is raised graduation rates to almost 90 percent.” Laufer said. “That was a lot of effort and not just by the school board but by school administrators, teachers and the students themselves.”

In 2015, Laufer co-founded a political action committee called Women Leaders in Virginia that supports female Democratic candidates in the state. Laufer has contributed $4,702 to the group according to the Virginia Public Access Project.

According to VPAP records, the only contribution Laufer has made to a City Council race is $150 for Melvin Grady’s campaign for the Democratic nomination in 2013.

Laufer said she would support programs to grow the city’s workforce.

“I’m proposing something I’m calling the Piedmont Promise,” Laufer said. “If you’re a student that graduates from Charlottesville High School with a grade point average of 2.5 or above, and [your family] resides in the city and earns the lower median income or less, the city will pay the graduating students tuition to attend a certification program or an associate’s degree program at Piedmont Virginia Community College.”

Laufer said in an interview after the announcement that this would cost $800,000 a year.

The candidate also said she would draw attention to the city’s affordable housing problem.

“This is something we’ve talked about years,” Laufer said. “We continue to attract new people to our community… we’re growing… but it’s putting a squeeze on many of our neighbors.”

Laufer supported a decision for the City Council to increase money placed into the Charlottesville Affordable Housing Fund.

“I commend the current City Council for doubling the current affordable housing fund but I just don’t think it’s going to be enough,” Laufer said before calling for a “real dialogue with all the stakeholders.”

Laufer also called on Charlottesville to ban or reduce the use of plastic shopping bags.

“Let’s be the leader on this for the east coast,” Laufer said.

A bill to allow Virginia localities in the Chesapeake Bay watershed to impose a five-cent tax on paper bags failed to make it out of a General Assembly committee this year.

There are also three seats on the school board up for election, including Wade’s. Wade said he will seek a fourth term as will Leah Puryear. Ned Michie has indicated he will not seek another term.