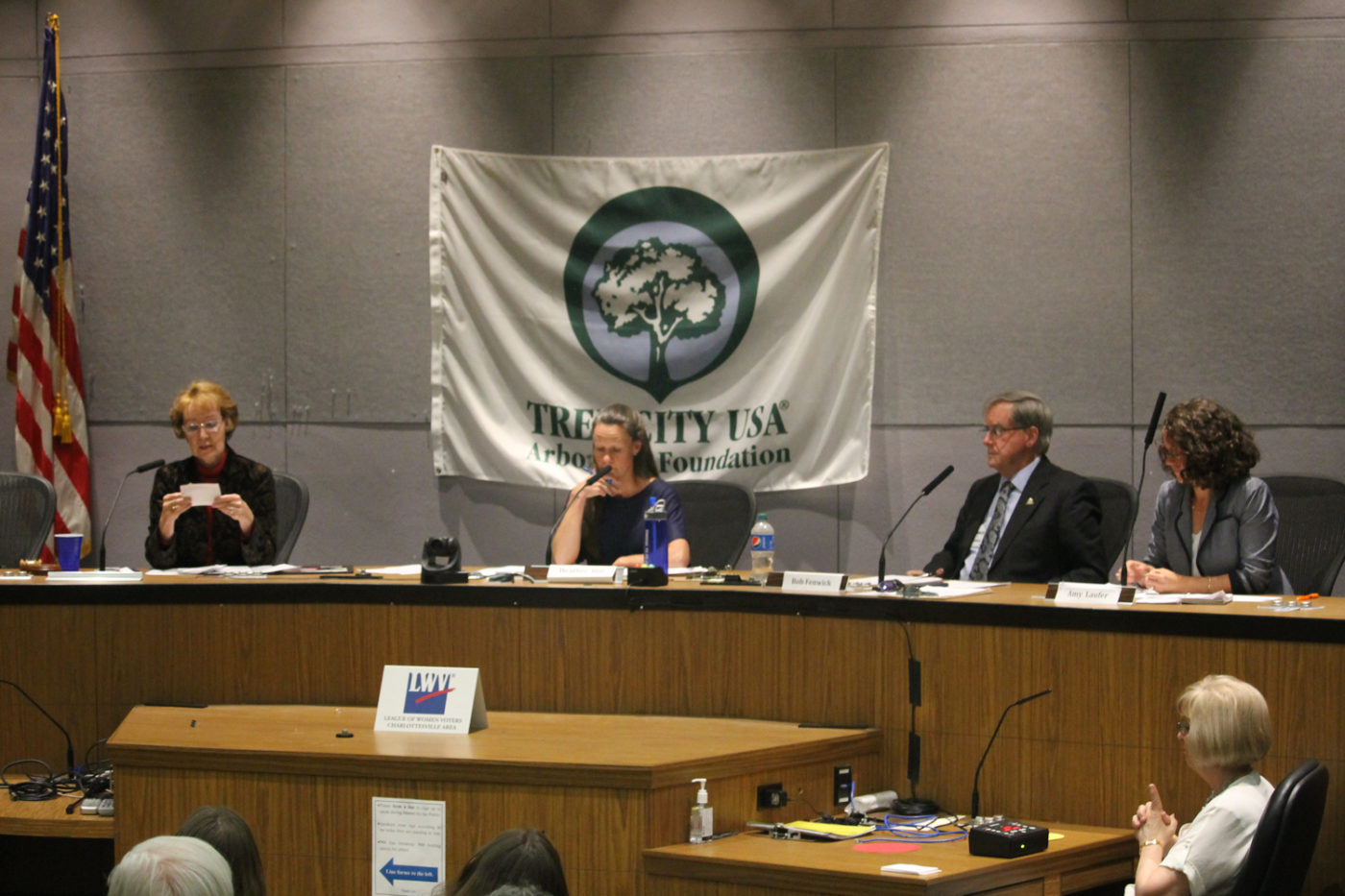 Around twenty people attended the event held in City Council chambers to hear the candidates on issues ranging from changes they would make to the city’s recently adopted $171.6 million budget to what they would do to address increased assessments of commercial real estate.

“I’ve been on the school board for the past five and a half years…and the most exciting thing we’ve accomplished is that we’ve increased graduation rates to nearly 90 percent,” said Amy Laufer. She added she grew up on a dairy farm in Wisconsin and helped pay for college by packing fish and then entered the Peace Corps.

“I engage in the city through my role as president of the North Downtown Residents Association and sit on the Belmont Bridge Steering Committee,” said Heather Hill. She has a background in industrial and systems engineering which she said she could use to help the city find cost savings through efficiencies.

“For about 48 years I have been a small business person so I know business inside and out,” said incumbent Bob Fenwick. He was elected as a Democrat in 2013 after two unsuccessful runs as an independent and also said “developers are not the devil.”

The first question from moderator Marge Cox asked what changes the candidates would have made to the recently adopted $171.6 million operating and capital budget for fiscal year 2018.

“This represents a 5.9 percent increase over last year’s budget and includes $51.3 million for the Charlottesville public schools,” Cox said. “In addition the capital improvement program fund is $21.9 million.”

Cox said the capital program includes $2.5 million for the Charlottesville Affordable Housing Fund and $3.25 million towards implementation of the West Main Streetscape.

Fenwick answered first and said the budget is “getting close to what the priorities for the community are.” However, Fenwick said he opposed paying Rhodeside and Harwell over $1.3 million for their work on their West Main Streetscape.

Hill said she was concerned that not many people attended the budget work sessions and that citizens might need better tools to engage with Councilors such as participatory budgeting.  But she said her experience campaigning has shown her one thing.

“I spent the last couple of months walking our neighborhoods every day and I could not get over the lack of sidewalks we have for a community of this stature,” Hill said. “My daughter cannot walk to Burnley-Moran Elementary School without traversing a long road that has no sidewalk.”

Laufer agreed with Hill that the city is not spending enough on infrastructure and said she often uses comparative data between different governments and said Charlottesville ranks lower than it should.

“After knocking on about 2,000 doors, I can tell you the main concerns are sidewalks and traffic,” she said. “I know what putting a sidewalk in our neighborhood did. All these kids are now walking to Walker and it was a great investment.”

Cox built on that with her second question which asked how candidates would balance the needs of pedestrians, cyclists, public transit and automobiles.

Hill said finding the right balance could reduce people’s reliance on driving but it will take work.

“I was invited by a neighbor whose door I knocked on and rode [Charlottesville Area Transit] with her for two hours and the [bus] was late by thirty minutes and that’s not something people can rely on to get to work,” Hill said, adding that every new development adds an impact on the streets that needs to be taken into account.

On parking, Hill said other cities use software to help inform motorists of where parking spaces are available.

Fenwick said that despite goals to increase walking and cycling in the city, he feels there are realities that must be acknowledged.

“I think it’s important that the city recognizes the automobile is going to be here for a long time,” Fenwick said. “Every time it rains, you’ll see maybe five percent of the bike traffic and very little of the pedestrian traffic. We have to recognize [in our planning] that’s the way people are going to get around for a long time.”

Fenwick said he would build bus stops to have as many covered shelters as possible to make transit more inviting.

“I think we could double or triple more the people who ride buses if we could make it more convenient for them,” he said. He also said church parking lots could be used as park and ride lots for commuters who travel from outside the city.

Laufer agreed that commuting behavior is not likely to change as many people come to work in Charlottesville from outside the locality. Increasing the number of affordable housing units could help reduce that number as could expanding free services.

“That free trolley gets so much use and if we could expand that, that would be something we would all be excited about,” Laufer said. She also said the city’s new parking manager, Rick Siebert, should conduct an inventory of private parking lots around the downtown area to see which could be used by employees who work downtown.

How will the city grow?

The next question asked how the current growth patterns within city limits could be reconciled with the desire of neighborhoods to maintain their “character and integrity.”

“A lot of communities might be dying but we’re not,” Laufer said. “The bottom line is that if we have 6,000 new people, we need to start looking at how we’re developing and have a real vision. I feel like the community feels like things are happening all over town and there’s no real vision.”

Fenwick said there is a lot of talk about affordable housing but there are constraints to getting units built.

“It’s not that easy because we have [10.4] square miles and are totally surrounded by the county, so if the county blocked the roads, what would we do?” he asked.

Fenwick said existing houses can be renovated and be made affordable.

Hill said the right balance can be found but there have been mistakes.

“I think many of us in the room have seen some of the wrong growth and it causes some concern when you experience that and you see it every day now when you walk down certain parts of our community and it’s not going to go away,” Hill said.

Hill said transitioning to a form-based zoning code could provide protections to existing neighborhoods from too much residential density. She added the Comprehensive Plan update will give citizens the chance to weigh in on the vision for the city.

Other questions dealt with city-county relations, the removal of a statue of Robert E. Lee and whether an audit of the city’s zoning code is a high priority.

Hill said the code audit is important for residents as well as the development community.

“I think it’s going to go a long way toward us partnering so that we all have a common vision for what we want the city to look like down the road,” Hill said. “If we all work together in conjunction with the city, the code audit really will allow us to have a vision for this city that the majority of people can be happy with.”

Laufer said she was disappointed the code audit has not yet taken place but hopes the review can be conducted in conjunction with an update of another document.

“Doing it alongside the Comprehensive Plan makes a lot of sense,” Laufer said, adding that she supports the form-based code because it will give more protection and stability for neighborhoods.

“The form-based code as I’ve read it allows us control over density and it creates areas of mixed use which encourages connectivity,” she added. “But it’s all going to have community engagement.”

Fenwick said the code audit should address the way buildings are constructed and said many of the new buildings on West Main Street should have used reinforced concrete rather than wood frames.

“When you build a building like that, you cannot repurpose it after 30 years,” Fenwick said. “The interior dimension are set but if it’s reinforced concrete you can repurpose it.”

Fenwick said he was concerned about the form-based code.

“I think we’re being sold something that we don’t really know what it is,” Fenwick said.

One questioner from the audience asked if the candidates thought it was fair that landlords pay a lower real estate tax rate than homeowners. Fenwick, Hill and Laufer all pushed back and said that premise was not true. A discussion of commercial property assessments ensued.

The three candidates will next meet at the Haven on May 9 at a forum sponsored by Equity and Progress in Charlottesville. The event begins at 6:00 p.m. Other forums for just the Democrats include one to be held by Charlottesville Tomorrow and the Daily Progress on May 17 in CitySpace beginning at 6:00 p.m.

There are also other forums scheduled for all current candidates, including independents Nancy Carpenter, Paul Long, Nikuyah Walker and Dale Woodson. The first of these will be held by the Piedmont Group of the Sierra Club on May 10 in City Council Chambers and the Greenbrier Neighborhood Association on May 24 at Greenbrier Elementary School beginning at 7:00 p.m.

EPIC will hold a forum for just the independent City Council candidates at a date and location waiting to be determined.

0:45 – Introduction from Marge Cox, moderator of the event

8:15 – Question #1: “The city has arrived at a $171.6 million operating budget for the fiscal year…  do you believe this budget reflects the right priorities for our community?”

15:15 – Question #2: “Given that traffic issues are among the most pressing in the city and given that there is a generational divide in our population, how would you balance the needs of bikes, pedestrians, public transit and automobile use? How would you address the parking issues?”

22:30 – Question #3: “How do you reconcile the desire for growth with the desire of the neighborhoods to maintain their integrity?”

35:35 – Question #5: “Do you think the code audit is important for the city and if so what should be the specific and most important outcomes from this process?”

42:00 – Question #6: “What investments does the city need to make in the Strategic Investment Area and why?”

50:35 – Question #7: “A judge has placed a six month hold on the removal of the Robert E. Lee statue and has further stated that removing it would violate state law. If this is still unresolved when taking office, what would you support doing concerning the Lee and Jackson parks and statues. What is the rationale for your view?”