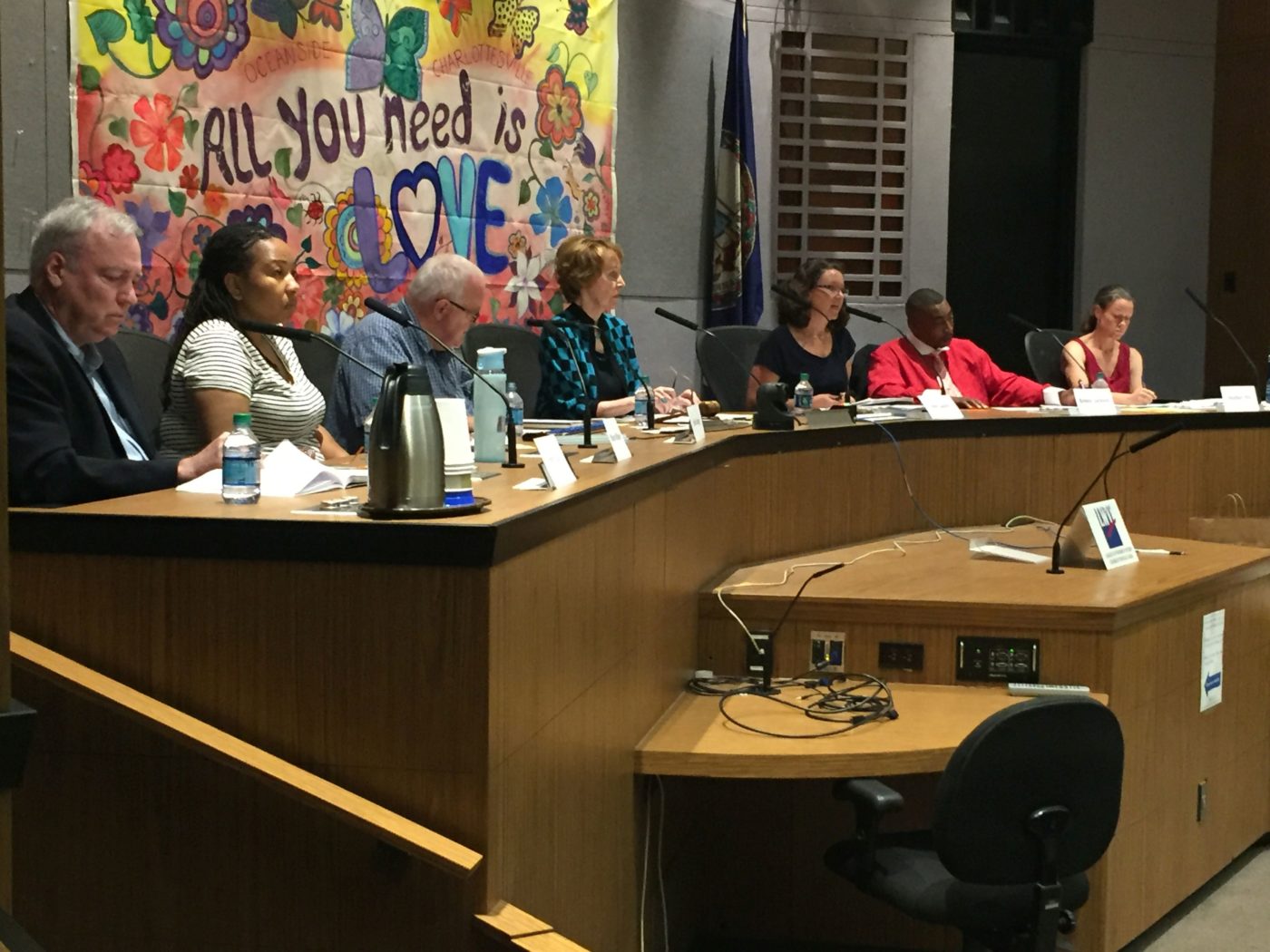 The six candidates for two seats on the Charlottesville City Council were asked to give their views on governance at a forum held Wednesday by the area branch of the League of Women Voters.

“We do take position on issues but never on candidates,” said Marge Cox, the moderator of the event.

This was the third time the candidates in the general election race met in an open forum. One previous event was held by Virginia Organizing and the other was sponsored by the Fry’s Spring and Johnson Village neighborhood associations.

Democrat Heather Hill said her background as an industrial and systems engineer has helped prepare her for the position.

“Transparency and accountability in how our city is managed has always been a top priority of mine and I feel like it could not be more important than now,” Hill said. “Our city needs strong leaders who are committed to taking responsibility, finding the answers we desperately seek and working with our community to solve its most complex issues.”

Kenneth Jackson told the audience he is running as an independent because he does not want to be beholden to a party.

Democrat Amy Laufer, a member of the League of Women Voters, was elected to the school board in 2011.

“This summer has been really traumatic and this past couple of months have been full of their own tumult,” Laufer said, adding Councilors need to listen to the concerns of people and come up with solutions.

Independent Paul Long has lived in Charlottesville for nearly twenty years and ran in 2009 and withdrew from the race in 2011.

“I’m running for City Council because I believe the present City Council is a disgrace to this city and their lack of leadership has further aggravated the problems that we’re facing,” Long said.

Independent Nikuyah Walker said her service working as substance-abuse counselor for Region 10 is one of the most important jobs she has performed. It also led to her current desire to run for Council.

“The very first time I came to a City Council meeting was in 2011 or 2012 asking the Council at that time to provide oversight for money they had signed off on, grant funding for Region 10 that I didn’t think we were fulfilling,” Walker said. “Since that time I have spent a considerable amount of time at Council meetings, very involved, watching meetings, writing emails.”

Independent John Edward Hall said he suffers with bipolar disorder but he is on good medication now.

“I will be sure to take what is necessary,” Hall said. “I am sure that as a design engineer with six U.S. patents and two U.S. copyrights as an illustrator, I am best qualified for the office of councilor.”

The role of the Dillon rule

The first question asked the candidates about an aspect of state government that prevents localities from writing its own laws.

Cox did not ask a specific question but candidates ruminated on those definitions.

“That means we have very limited authority,” Laufer said. “I know a couple of years ago we talked about reduced sentencing for people who had small amounts of marijuana. We couldn’t do that. I know there are a lot of housing issues we can’t enact because of the Dillon Rule. I don’t know what else I can say. Almost every aspect that we’d want to do something different, the state won’t allow it. We saw that most recently with the [Confederate statues].”

Long said it is a disgrace that the Dillon rule is in effect.

“According to Jeffersonian democracy, the best government is at the local level and I think the Dillon rule should be repealed and replaced,” Long said, adding the city should have the ability to ban militias from carrying rifles at local rallies.

Walker said she has been working to increase the minimum wage in the city and has come up against the Dillon rule on multiple occasions.

“Being able to increase that wage, the city has the authority to say they will pay a higher wage within the city government but to mandate it for businesses within the city, that’s something prohibited by the Dillon Rule,” Walker said.

Walker went on to say many economic disparities in Charlottesville could be addressed if higher wages could be mandated.

Hill said the Dillon Rule affects the ability of the city to require that more affordable housing is built.

“We’re constrained and there’s only so much we can ask of developers given what the state has determined,” Hill said. She credited former Charlottesville Mayor Dave Norris for helping lobby the General Assembly for permission to receive cash contributions from developers.

“With the right kind of focus, we actually can create change and go to the state level and get those rules in place,” Hill said. “But we continue to be very bound by the restriction put in place that are done by-right.”

Jackson said the Dillon Rule is not stopping affordable housing from being built.

“It’s our own ordinances which for decades the City Council has made so difficult and then they put fees and taxes and stuff on people,” Jackson said. “Who do you think the landlords will pass that on to?”

The changing character of Charlottesville

Cox’s second question built on the first one.

“The character of the city is changing with increasing gentrification, fewer vacant lots, new technology companies and a growing senior population,” she said. “How should the City Council address these changes?”

Jackson said he thought Council can take action to fix the tax issues he said come with gentrification.

“You buy a house and someone puts a big McMansion that’s $400,000 and suddenly you’re paying almost the same tax they’re paying,” Jackson said. “The city does not have to do that. The city doesn’t have to charge you the same.”

Laufer said Charlottesville has changed a lot since she was first elected in 2011.

“I’ve really seen the neighborhoods change,” Laufer said. “We can see the schools too have changed and we have increased enrollment. We are a changing community and I don’t think we can just stop. I think we should count ourselves fortunate that we are a place that people want to be.”

Laufer said the city needs to do more to help people maintain their own homes. She called for the raising of the maximum income level for seniors to qualify for the city’s tax reduction program.

Long said the increases in property tax assessments this year were a disgrace.

“They went up outrageously,” he said. “I think City Council should have done something. I can stand to be corrected, but I believe some assessments went up 200 to 300 percent. There’s no way that should have happened.”

Walker said the policies that have led to a changing Charlottesville were enacted by decision-makers who were around the table at the time.

“The character of the city is changing and that didn’t happen by an act of God,” Walker said. “It happened because people are at the table implementing policies that haven’t been equitable.”

Walker said the city needs to limit tax breaks and other incentives for developers. For instance, she said Council should not have approved the extension of an $850,000 loan given to developer Keith Woodard recently for 57 units at Dogwood Housing.

Hall said the city should partner with the county and the Jefferson Area Board of Aging to address the community’s senior needs.

Hill said the city lacks a vision for growth.

“I think too often in Neighborhood Development Services, it’s very transactional and about whatever development is happening at this time,” Hill said. “It’s not really looking forward to where we’re going to be and I think that’s gotten us into the situation we’re in.”

Hill said the city does need to partner with the private sector to develop affordable housing.

The final question from the moderator dealt with the make-up of city government.

“Considering the fact that Charlottesville has a city manager form of government, what do you see as the proper relationship between Council, the city manager and his staff, as well as appointed boards and commission, and paid or citizen consultant groups?” Cox asked.

Walker said Council frequently overrides recommendations of staff and cited a time when Council overturned a recommendation from Parks and Recreation staff to open Smith Aquatic Center later on Saturdays.

“There were some patrons who came in who wanted the center to remain open on Saturday mornings even though staff going through the budgeting process decided it wasn’t producing the revenue to keep the center open,” Walker said. “Without consulting the city manager and his staff there was a decision made immediately because Council did not want citizens to be upset about the closing of it.”

After the events in Charlottesville on August 12, Walker said more power needs to be given back to staff to make decisions and set priorities.

“I believe the city manager form of government serves Charlottesville well and will continue to do so,” Hall said. “The city manager is the quarterback of the City Council ‘football team.’”

“We also have to arm them with the right tools in which to prioritize,” Hill said. “I feel like staff is constantly chasing their tails trying to figure out who they are reporting to and following. The onus does certainly fall on Council to understand its role. Its role is to have accountability on the city manager.”

“The City Council governs and runs with the city and that’s what they’re elected to do,” Jackson said. “The city manager is underneath them and he oversees the day-to-day operations. We should always have a working relationship with the city manager.”

Jackson also said Council should listen more to the recommendations and rely less on consultants.

Laufer said the school board has a similar relationship with Superintendent Rosa Atkins that Council has with Jones.

“The role of the council or the school board is to set a vision,” Laufer said. “They are directly responsible for evaluating and hiring the manager or superintendent. They make budgetary and policy decisions based on the vision that they’re working toward.”

However, Laufer said it is hard for school board members or Councilors to avoid getting involved with day-to-day operations, but elected officials must hold themselves back from overly doing so. For that to work, staff must provide information and frequent reports.

Long said Jones is “doing an excellent job” but Council has abdicated its responsibility and has allowed Mayor Mike Signer to have too much power.

“I believe this city is spending too much money on outside consulting firms coming in and doing studies,” Long said.

Election Day is Nov. 7. The last day to register to vote is Monday.

22:30 – Question #2: Candidates are asked to weigh in on changing nature of Charlottesville

34:50 – Question #3: Candidates are asked to describe their views on the appropriate relationship between city council, city manager and appointed boards and commissions

59:50 – Audience question #1: Do you support the approach of Solidarity Charlottesville to disrupt city government meetings? Why or why not?

1:09:30 – Audience question #2: As a city councilor, describe your own approach to working with city staff and appointed boards.

01:20:30 – Audience question #3: With political climate so volatile what concrete steps will you take to bring unity to Charlottesville?

01:30:40 – Audience question #4: When the collective wisdom of city council fails to answer a question, would you be willing to refer the matter to the voters in a referendum?