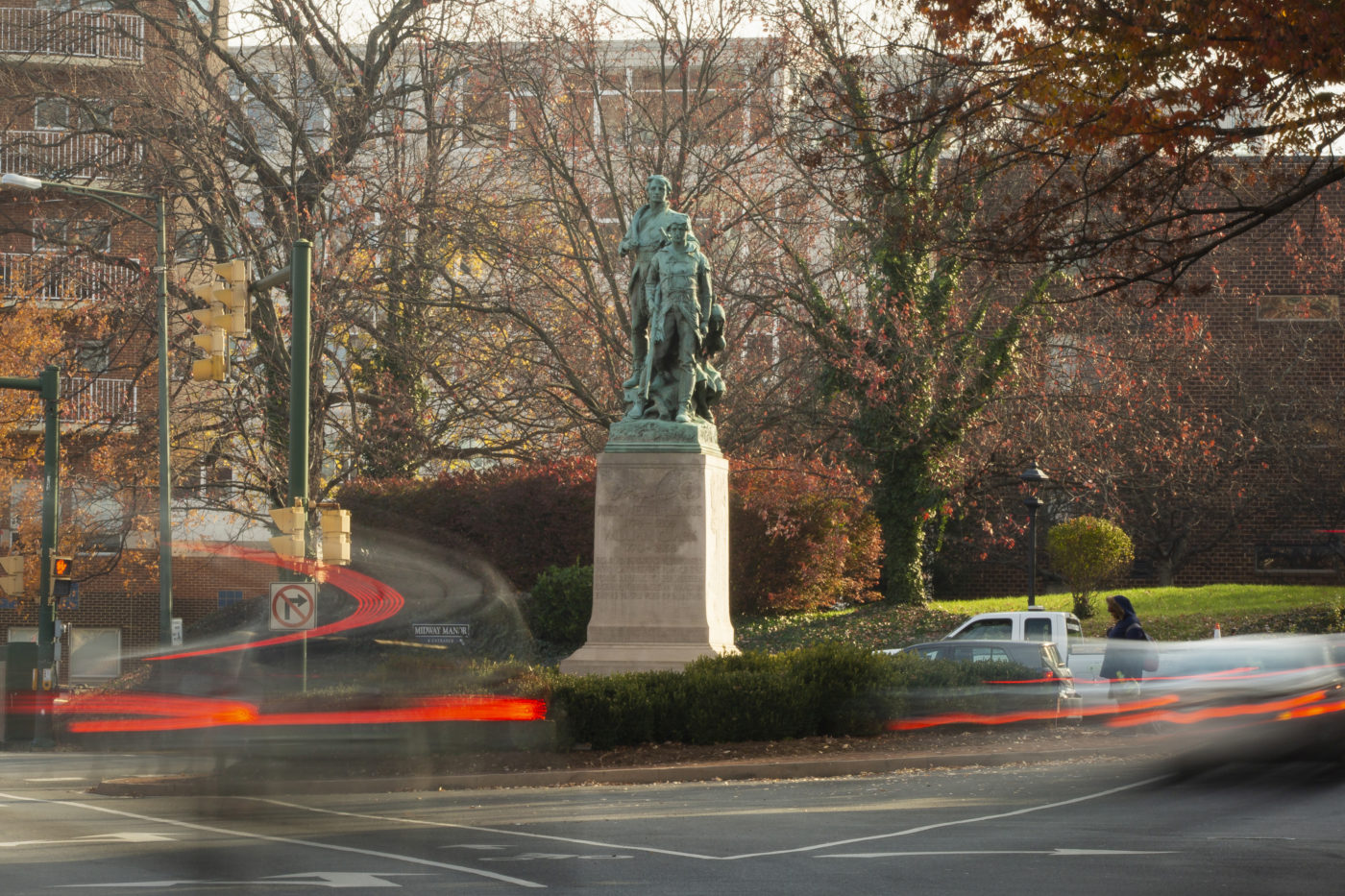 The original Lewis, Clark and Sacajawea statue has occupied the corner of West Main and Ridge Streets for a century.

If the move is possible, the facility in Darden Towe Park plans to contextualize the sculpture

Last Friday, during a special work session, the Charlottesville City Council approved a resolution to relocate the city’s existing Lewis and Clark statue, a monument that has garnered critique for its depiction of Sacajawea, the Shoshone teen who served as the men’s translator and guide. While the bronze depictions of Meriwether Lewis and William Clark stand tall, Sacajawea crouches beneath them.

Proposed designs for the West Main Streetscape project calls for the statue to be moved 20 feet to accommodate a turn lane and pocket park. A City Council meeting in June drew supporters of the statue that has occupied the corner of West Main and Ridge streets for 100 years. It also drew many who said it is disrespectful to Sacajawea and her contributions to the expedition, something echoed by her descendants who served as panelists during Friday’s work session.

One such comment came from a Sacajawea descendent who has been to Charlottesville before. Rose Ann Abrahamson recalled the installation of a commemorative plaque that highlighted the native woman’s significant contributions to the group’s journey. She and relative Emma George were involved in crafting the text of the plaque that was added for context in 2009, 90 years after the statue’s erection.

“We came here to place a plaque to alleviate the outwardly offensive depiction,” Abrahamson said. “I can say that when I saw it in person for the first time, I was very shocked. For, you see, my ancestor, Sacajawea, has many images throughout this country. My family and I were able to see them firsthand. This statue in Charlottesville was the worst we have ever seen.”

Abrahamson also noted the original placement of the statue in 1919.

While the next steps involve a cost estimate for removal, deciding where to relocate it and a process to design a new statue with consultation from Indigenous people — much of the timeline still is undetermined. However, there is a location nearby that has expressed interest in being the statue’s new home, the Lewis and Clark Exploratory Center in Darden Towe Park.

“We didn’t want to impose our desire for the statue on the city, so we weren’t out there lobbying for their decision one way or the other,” said Alexandria Searls, executive director of the center. “But we did make it clear that we were wanting to be an option.”

Over the weekend, George, Abrahamson and Abrahamson’s daughters visited the center for a dinner. Searls said they expressed gratitude that the center expressed interest in taking the existing statue.

Should the statue reside at the center, there is an idea for some type of installation to surround and contextualize it with how historical depictions are relevant to the times in which they are created.

During the work session, Abrahamson noted the statue’s figures were reflective of Sacajawea’s lower status in how she was perceived at the time.

“In 1919, Lewis and Clark were Virginia’s heroes. But Sacajawea was a woman and a Native American,” Abrahamson said. “We do not know the artists’ history and intent, but we believe it is time to put the statue where it belongs. It belongs in a place where we can inscribe that this depiction of a woman and of Sacajawea does not hold truth today. It is an image of the past when women in America did not have rights and Native Americans were not recognized as citizens.”

Commissioned and gifted to the city by Paul Goodloe McIntire, and sculpted by Charles Keck, the statue’s placement was to commemorate the transcontinental Lewis and Clark Expedition, which President Thomas Jefferson commissioned. The statue was erected a year before a woman’s right to vote was ratified in 1920. Native American people were not granted citizenship until 1924, and their right to vote came in 1962.

“That would be a fluid situation, and we would be eager to work with the Shoshone on their idea of having accompanying artwork with the statue expressing their viewpoints, and certainly that would also include the plaque,” Searls said. “We’re interested in the history of the representation really every step of the way — I was present when the plaque was dedicated, and the words of the Shoshone really hit home with me. I have vivid memories of the dancing that day — but really how we are changing our ways of looking at these and interacting as a community would be our top priority in conveying.” 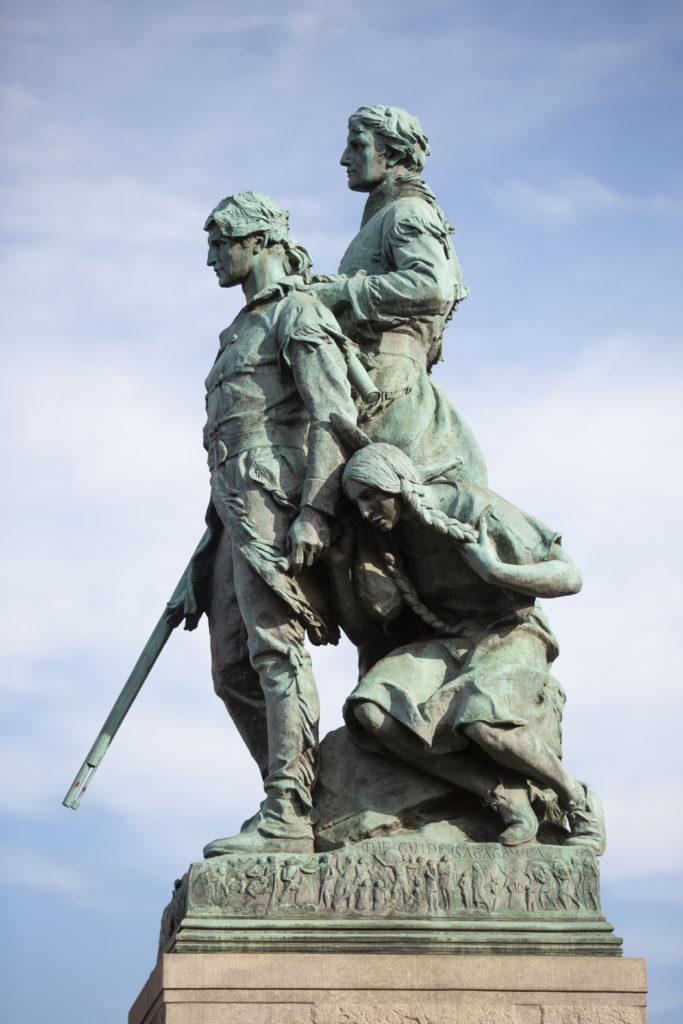 Both the city and Albemarle County own the land that the center sits on. If the Lewis and Clark Exploratory Center takes the statue, Searls said they will have to consult with Charlottesville, Albemarle and the Thomas Jefferson Planning District Commission to shepherd the process of relocation.

“This is a significant and heavy item to move [to the center], and it’s expensive, so it’s going to have to be decided as a group about it and about where it is,” Searls said. “We are a very modest nonprofit, so we don’t have the funds to move it, or, at this point, maintain it.”

Searls said she has consulted with an art expert in New York and feels “encouraged” about the durability of the statues.

As the center teaches the local history related to the Lewis and Clark expedition, Searls said homing the original statue can enhance that.

“This would help us show how the expedition has been seen throughout history,” she said. “We change how we encounter history.”

As such, she noted another historical figure involved in the journey who is less often referenced or depicted.

“We serve many school field trips, and one of the exercises that we do with field trips is we have children to look at a variety of depictions of York,” Searls said.

York was an enslaved person, owned by Clark, who also accompanied the group on their expedition and was not granted freedom until many years later.

“He is portrayed in many different ways, and we don’t know what he looked like. Unlike Lewis and Clark, there’s not a drawing of him,” Searls said.

She said that the center examines his prominence and placement in depictions along with if he is shown with a gun — something he had on the expedition, but not something enslaved people were usually permitted to possess at the time. The center also has an abstract statue that symbolizes his desire for freedom and how Clark did not initially grant it.

As for now, the resolution passed by the council states that city staff are to present a plan to council with removal cost estimates and relocation ideas. The resolution also directs city staff to “present a plan for a new statue of Sacajawea and other memorializations of Virginia native peoples with primary consultation from Indigenous people on the design of the statue.”

Charlottesville spokesman Brian Wheeler said the timeline of that actions are still to be determined. With three of the city councilor’s final meeting happening on Dec. 16, there is a possibility a cost estimate could be presented at that time, but nothing is concrete.

According to city spokesperson Brian Wheeler, the family of Sacajawea spells her name with a “j” rather than a “g.”