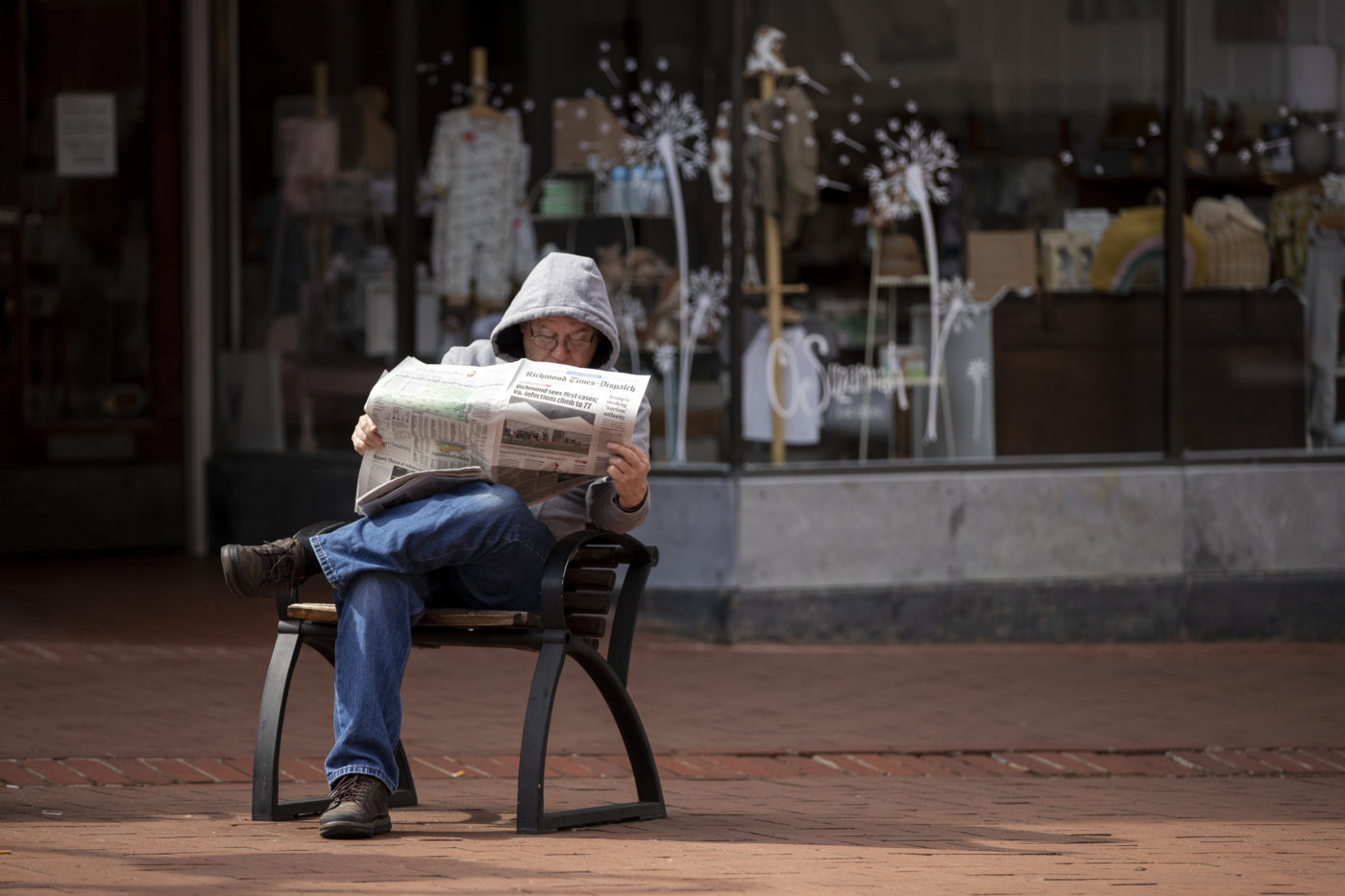 A man reads a newspaper alone on March 19, 2020, on the Charlottesville Downtown Mall.

With the June 8 primaries just around the corner, many Virginians will find themselves turning to their local and statewide newspapers for insights on their choice of candidates. While local newspapers serve as communal resources, the amount of local outlets has shrunk in recent years. As the concern grows, people are taking action — from partnerships to newsroom unions to legislative proposals.

Virginia lieutenant governor candidate Sam Rasoul — currently the delegate for the state’s 11th District — has plans to protect and bolster local media around the state.

In rolling out some policy proposals, if elected, Rasoul outlined goals to support local media that include:

The proposal is inspired by and would be a state version of the Local Journalism Sustainability Act, which is currently stalled in Congress.

Rasoul’s proposal also includes supporting government advertisement to Black or other minority owned media along with reforms to local government practices — like placing a cap price on Freedom of Information Act requests at $100 and enhanced training for record keeping public employees.

Rasoul was, in part, inspired by the downsizing of a prominent newspaper in Roanoke that serves much of Southwest Virginia.

“One of the biggest concerns I’ve had is what’s happening here locally at Roanoke Times as we’ve seen Lee Enterprises continue to take an attack on local journalism,” Rasoul said, referring to layoffs in the past year. “I grew up here in Roanoke. So, to watch the [Roanoke] Times continue to dwindle, as far as staff and support, has been tough to watch.”

Lee Enterprises purchased newspapers like The Roanoke Times and The Daily Progress in early 2020, laying off more than 20% of The Times’ staff by April 2021 and eliminating 5 positions at The Progress. Design of both papers has also been outsourced to an out-of-state center.  Journalists in both papers have unionized with contracts that require two weeks’ notice of any layoffs and severance payments — protections that had not been in place previously.

“Our corporate owners have once again put short-sighted profit goals over both long-term solutions and the newspaper’s mission to deliver vital local news,” said Alison Graham, a Roanoke Times reporter and union vice chair of the Timesland NewsGuild in an April press release.

"We realized we cannot be objective to our own demise."

Neither the Timesland NewsGuild nor the Blue Ridge NewsGuild would provide comment for this story, but Charlottesville Tomorrow was referred to NewsGuild-Communication Workers of America, which is the umbrella organization for various newsroom unions around the country.

Jon Schleuss, president of NewsGuild-CWA, said that while the organization is nonpartisan in respect of the work of journalists and communities they cover, the pandemic further highlighted the need for journalism and legislation that can help it. As such, NewsGuild supports the congressional bill that Rasoul’s proposal is inspired by.

“We are a union that represents a lot of journalists. We try not to get into political partisan things because journalists have to be independent from who they cover,” Schleuss explained.

Calling the pandemic “devastating to local news,” he added that “we realized we cannot be objective to our own demise.”

C-VILLE Weekly editor Ben Hitchcock also supports the idea of how the government can help local media around the state, but cautions about depending too much on that aid.

“I believe local journalists are doing important work and anything that can be done to incentivize that is good,” Hitchcock said. “You want to be careful because we have to be harsh critics of the state at times so, setting up a model where we are dependent on the state is probably not great. But there are ways I think of navigating that tension I would imagine.”

Last summer, the locally-owned C-VILLE Weekly, downsized its staff and appointed Hitchcock to editor. In the time since, he says the focus has continued to be on putting out the paper each week. He says initiatives like capping FOIA fees and tax credits that can encourage advertisers will be helpful to newsrooms like his.

According to Schleuss, more than a 1,000 media professionals have unionized with the NewsGuild per year since 2018, with more than 400 in this year so far.

“You can’t cut your way to success,” he said. “You have to invest in journalism if you’re going to have good local journalism.”

Charlottesville Tomorrow is a nonprofit newsroom that is in partnership with Black-owned outlets Vinegar Hill Magazine and In My Humble Opinion radio show on WVAI-FM — forming the Charlottesville Inclusive Media project.

The partnership was possible through a grant from the Google GNI Innovation Challenge and was one of 33 projects nationwide selected in that round of grant funding.

Vinegar Hill Magazine is named for the predominantly Black Charlottesville neighborhood that was razed by the local government in 1964. Currently parking lots, a shopping center and other companies sit on what was once homes and Black-owned businesses that first came to fruition in the Reconstruction Era following the Civil War.

Sarad Davenport, content manager and digital strategist for Vinegar Hill Magazine, likes the idea of tax credits to enhance support for local newsrooms, adding that “any support for Black or minority owned media is support for overall communities.”

He also says partnerships like CIM could be a model for other news outlets and companies.

“Creating a more inclusive social narrative is going to be helpful for communities as a whole and push us towards these issues we say we want to tackle around justice, equity and inclusion,” Davenport said. “It is going to help us live up to it from a community standpoint.”

In the meantime, Rasoul notes that “there is no one silver bullet” in his proposal, but that he hopes a combination of ideas can help an industry enshrined in the First Amendment and one that Rasoul values.

Should he be elected as Virginia’s next Lieutenant Governor, he will encourage the General Assembly to take action on policies to support media, and if he remains a state delegate, he plans to introduce them in the next legislative session.

“I think that we shouldn’t be innocent bystanders here,” Rasoul said. “The reality is that people’s lives are just so busy and having healthy local journalism helps us cut through all the noise and really understand what is happening in the world around us that directly impacts us.”