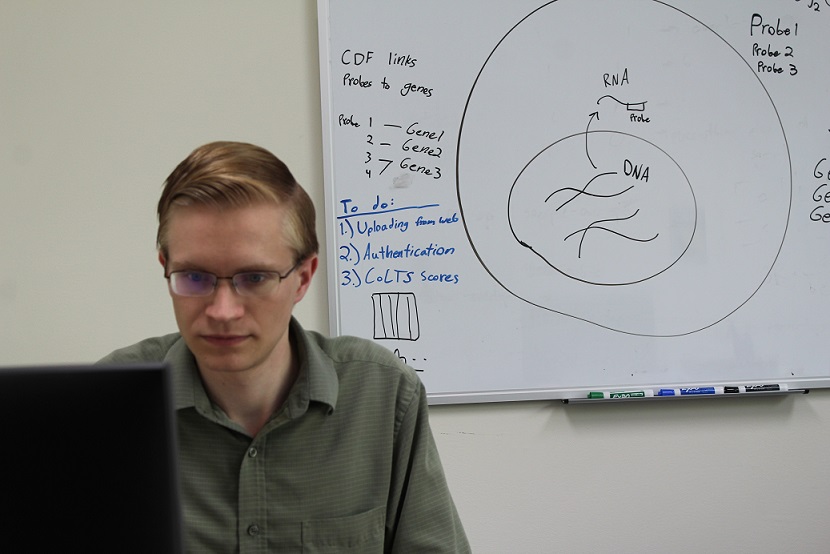 Bryce Aidukaitis, an investigative research analyst at AMPEL, joined the company in 2017 after graduating from the University of Virginia.

A Charlottesville company is helping to lead a global scientific effort to better understand and treat lupus, an autoimmune disease sometimes called “the cruel mystery.”

AMPEL Bio Solutions, a biomedical research consultation firm, is involved in multiple clinical trials of new drugs and treatments for lupus. The company hopes to use data from the human genome to develop personalized treatment plans for patients.

“The genes that can drive the disease are known,” said Amrie Grammer, co-founder and COO of AMPEL. “We are building a road map of lupus that will show the genes and drugs that can cut off the disease at the pass.”

Lupus causes a person’s immune system to attack their own tissues and organs. It often is manifested in sudden, unpredictable “flares” of illness. Its common symptoms — including fever, joint pain, rashes and fatigue — can be like those of many other diseases, making it difficult to diagnose.

Lupus nephritis, an inflammation of the kidney, is one of the most common and severe complications arising from systemic lupus. Pop singer Selena Gomez raised public awareness of the condition after undergoing a kidney transplant in 2017.

This spring, AMPEL began a clinical trial to test whether non-invasive imaging methods such as two-dimensional MRI can be used to monitor lupus nephritis instead of performing repeated biopsies on the kidneys.

The company is also close to completing a clinical trial of slow-release prednisone, a steroid that can alleviate lupus symptoms. AMPEL has hypothesized that the slower release of the drug could provide longer-lasting relief for patients.

LuPRO regularly asks trial participants questions about their symptoms and, with the use of a smartwatch, can track patients’ activity and sleep patterns. A decrease in movement and poor sleep are indicators that the patient could be experiencing a lupus flare.

A patient’s report of worsening symptoms can prompt a phone call from a nurse or rheumatologist. When prescribing medication, the rheumatologist can consider information from the LuPRO app instead of asking patients to try to remember the details of a flare that may have already run its course.

AMPEL hopes to soon provide LuPRO patients with an at-home blood test that they can mail to a lab to see if any genes associated with lupus are being abnormally expressed. Grammer said this will enable the patient’s rheumatologist to practice “precision medicine,” prescribing the right drug at exactly the right time.

Deidre Gee Baptista, a lupus patient and a board member for the Lupus Foundation of Northern California, said the LuPRO app could be useful in many lupus studies.

“It makes the most sense to get real-time data from a patient who might have a flare one week, but not the week of their medical appointment,” she said.

Baptista and her identical twin sister, Kirsten Gee Maeda, travel around California as “the Gee Twins for Lupus” to raise awareness of the disease.

In a phone call on May 10 — World Lupus Day — Maeda said lupus patients are eager to understand the latest research on the disease and to learn how they can get involved.

“What AMPEL is doing is exciting,” Maeda said. “It gives us more hope that we can share with new patients and their families.”

Grammer founded AMPEL in 2013 with Dr. Peter Lipsky, a former colleague from the National Institutes of Health. Both have backgrounds in immunology with a focus on lupus.

AMPEL is now based in the Lewis & Clark building on Charlottesville’s Downtown Mall. The company employs about 25 people and is looking to hire more.

But in AMPEL’s first year, before they acquired proper office space, Grammer and other employees spent their workdays in Cville Coffee, developing a methodology for ranking potential lupus drug candidates. They solicited submissions from doctors, pharmacologists and lupus patients through a LinkedIn page.

AMPEL’s highest-ranking drug candidate so far is Stelara (ustekinumab), currently marketed by Janssen Pharmaceuticals as a drug for plaque psoriasis. In 2015, AMPEL and Janssen launched a phase 2a clinical trial to reposition Stelara as a lupus drug.

After 24 weeks, 61 percent of patients receiving Stelara showed improvement in lupus disease activity, compared with 30 percent in a placebo group. Janssen immediately launched a phase 3 trial that is scheduled for completion in 2019.

If approved by the Food and Drug Administration, Stelara could become only the second lupus drug to reach the U.S. market in more than 50 years.

“What we are doing with Stelara is the ideal hope for all the drugs we have identified,” Grammer said.

AMPEL is collaborating with the laboratory of UVa rheumatologist Dr. Shu Man Fu to match other drugs in its clinical and pre-clinical trials with “druggable” gene targets in lupus nephritis patients.

Grammer said she is excited to follow the progress of All of Us, a new NIH survey that will engage at least one million volunteers to contribute their health data over many years and collect data on the genetic expression of various diseases.

“Americans are primed and ready to understand that genes are a road map that can make them healthier,” Grammer said. “AMPEL’s research is relevant, timely and at the bleeding edge of science.”