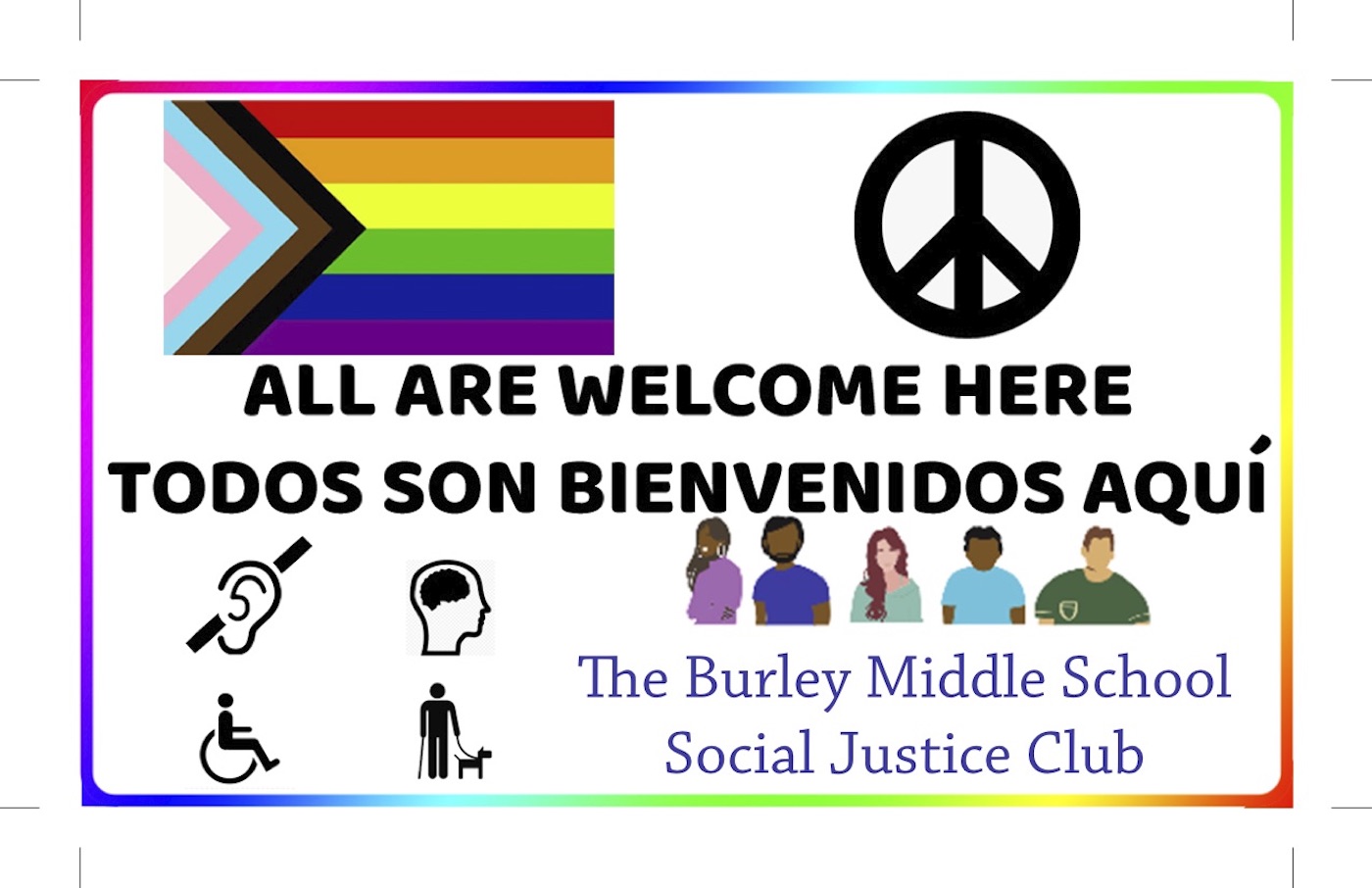 Students in Burley Middle School's Social Justice Club designed and sold this poster as a fundraiser to raise money for the B.U.C.K. Squad.

A group of eighth graders from Albemarle County’s Burley Middle School raised $500 this year for an organization working to reduce the number of shootings in Charlottesville.

The students are part of a new club created by counselor Andrew Davis called the Social Justice Club.

At first, the idea behind the club was to give interested students a space to talk about race and other social issues. But after several months of meetings, the kids decided they wanted to do more than talk.

“We’ve talked about different issues about race, about stereotypes, about institutional racism and how it’s present in schools,” said Ingrid Flaherty, one of the group’s four main members. “And eventually we started thinking, what if we stop talking and start doing something. So we started talking about what we could do to help people in the community. So that’s how we started our fundraiser.”

Before they could get going, the group needed to decide where to donate any money raised.

They wanted to find an organization that was making a difference in an underprivileged community. They tossed around a few ideas, then Davis came across an article in Charlottesville Tomorrow about a new group working to reduce shootings in the city’s Black community.

The article featured the story of a Burley student, Claude Booker Jr., who had experienced an ambush-style shooting just outside his front door.

“When I saw that you had included excerpts from Claud, it seemed perfect,” Davis said to Charlottesville Tomorrow.

The group, called the B.U.C.K. Squad, Brothers United to Cease the Killing, launched in January in response to an alarming increase in shootings and homicides in the local Black community. It comprises local Black people, mostly men, many of whom were once violent themselves.

These men, who have turned their lives around, are now acting as mediators, working to interrupt conflicts in their community before they become violent.

“One of the things I wanted to stress with this fundraiser was the reason that it was so valuable was because we were letting people in a community be the experts in their community, as opposed to outside people going into a community to try and fix something,” Davis said.

The students agreed. They designed posters that said — “All are welcome here” — and offered them for sale to teachers and other people around their school.

“When we got the first few replies on the Google Form, I screamed,” said club member Charlotte Sargent. “I was jumping up and down. It was so exciting that we’d been working on this for months and months and months and we finally got to do something with it.”

After receiving the students’ donation, leaders of the B.U.C.K. Squad met with them over Zoom to discuss their group and the work they do.

“I thought it was really fascinating that they literally risk their lives,” said Leen Nouri, who was the club’s first member and came up with its name. “It’s a nonprofit thing, they did this just to protect the community. It was something that really motivated me, you know?”

“Yeah, it was really inspiring,” Flaherty continued. “They said they had been the people holding the guns at earlier times in their lives and they had come back to the community to try and stop the violence that was happening.”

After raising the money and making the donation, all of the students are now determined to fundraise for a worthy cause again.

The members are working to recruit younger students to continue their work next year. They’re also looking at options to expand the club to include other schools around the district.

“I feel like my whole job here is to elevate their voices,” Davis said. “So, if that is something they want to do, I will work hard to make that happen.”