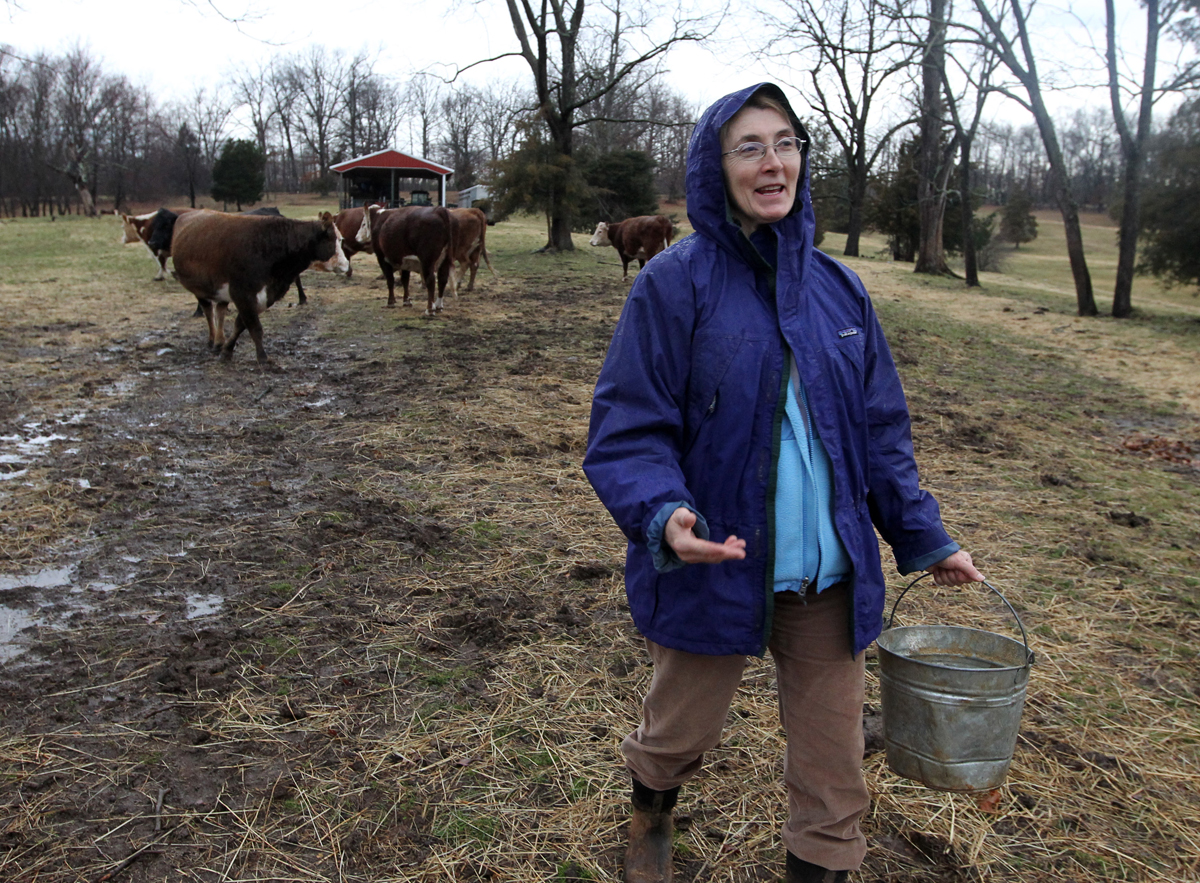 Albemarle Supervisor Ann Mallek on her farm in Earlysville

Buying fresh, locally sourced meat is a priority for many consumers in the Charlottesville area. But that product has to take a detour out of the community when it is transported up to several hours away for processing.

The truth is, you can’t eat local beef, pork or lamb without a slaughterhouse, and there is no significant facility for meat processing in Central Virginia.

“We need one bad,” said Collins Huff, a consultant for artisan meat producer Gryffon’s Aerie in Albemarle County. “That’s been established for years now. The trouble is no one wants to step up to the plate and do it.”

In April 2013, the Albemarle County Board of Supervisors approved changes to the zoning ordinance to permit slaughterhouses by right in industrial districts, subject to supplementary regulations.

Such regulations are related to the size and placement of the building and site. For example, outdoor animal holding pens at a slaughterhouse are prohibited.

Supervisor Ann H. Mallek said a local processor would be able to recruit more farmers to use it for a variety of livestock.

“Many people would likely look closer to home in order to spend less time and fuel dollars involved in transportation,” said Mallek, who has cattle on her farm in Earlysville.

Mallek said she was a little discouraged the proposal has never made it to the finish line.

Currently, the closest major slaughterhouse is True and Essential Meats in Harrisonburg, about 60 miles away.

Despite support for processing local food locally, experts say the economics are challenging.

Joe Cloud, manager of T&E, said a slaughterhouse is a low-margin and capital-intensive business because of the machinery and inspections for the plant.

“It’s hard to imagine setting up a plant for under $2 million,” he said.

Barry Jones, of the Virginia Department of Agriculture and Consumer Services, said many proponents of a local slaughterhouse also are fully occupied in their current businesses and are not capable of building a facility and operating it. He said it’s a big challenge and a large undertaking.

Susan Stimart, Albemarle’s economic development facilitator, said the financing for one would more than likely have to come as a charitable donation with no return on the investment.

“Not many people grow up wanting to get into this skilled profession of butchering,” Harrison said. “That is a true art form and also physically demanding.”

Joel Salatin, of Polyface Inc. and co-owner of T&E, said he thinks a venture can succeed if all the components — marketing, finance, service and production — can be put together.

T&E’s Cloud said he’s established positive relationships with his customers, who have different needs and seek consistency. However, he acknowledged competition would have an impact on his bottom line.

“A Central Virginia slaughterhouse would cause me a lot of concern because a significant amount of our business comes from there,” he said.

Limited options mean farmers have to plan carefully and get in line. Jones said that even though other slaughterhouses are not terribly far away from Albemarle, there is often a lengthy wait time.

“It’s certainly a business where you have to plan ahead to reserve a spot,” he said.

Jones said this irritates some producers and new farmers who don’t take a lot of animals and aren’t fully knowledgeable about when their animals will be ready.

The waiting period could ease up if there was an additional slaughterhouse close by, but besides needing money, skill and a location, the facility also needs to be inspected and approved by the U.S Department of Agriculture.

Ben Thompson, from The Rock Barn in Nelson County, said many people have a negative attitude toward the USDA process but he thinks that’s the easiest part to overcome.

“I think people should utilize the USDA more,” Thompson said. “They provide a lot of help.”

Thompson also explained the importance a slaughterhouse can have on the final product.

“It’s not just a cut and wrap … there is creativity involved and it’s chef and butcher driven,” he said.

Local farms also have to compete with bigger producers and major grocery stores.

“Even if people are willing to pay more for a pork chop at a farmers market than a grocery store, they won’t pay but so much more,” Thompson said.

Thompson said a lot of startup farmers need processing at a low cost but need to understand that might not always be possible.

Salatin said a slaughterhouse can be supported by a community if it’s of a size and character that fits the area.

“An extremely large facility of any type can certainly [cause] imbalance in a community,” he said.

“It’s hard to find a place to put one where everybody is happy,” Jones said.

There are no current plans for a large-scale Central Virginia slaughterhouse.

“We haven’t pulled the right trigger or found the right entrepreneur to be able to do this,” Stimart said. “I’m still hopeful because I’m seeing a lot of younger people getting involved with farming.”