Local organizations working to tear down barriers to housing 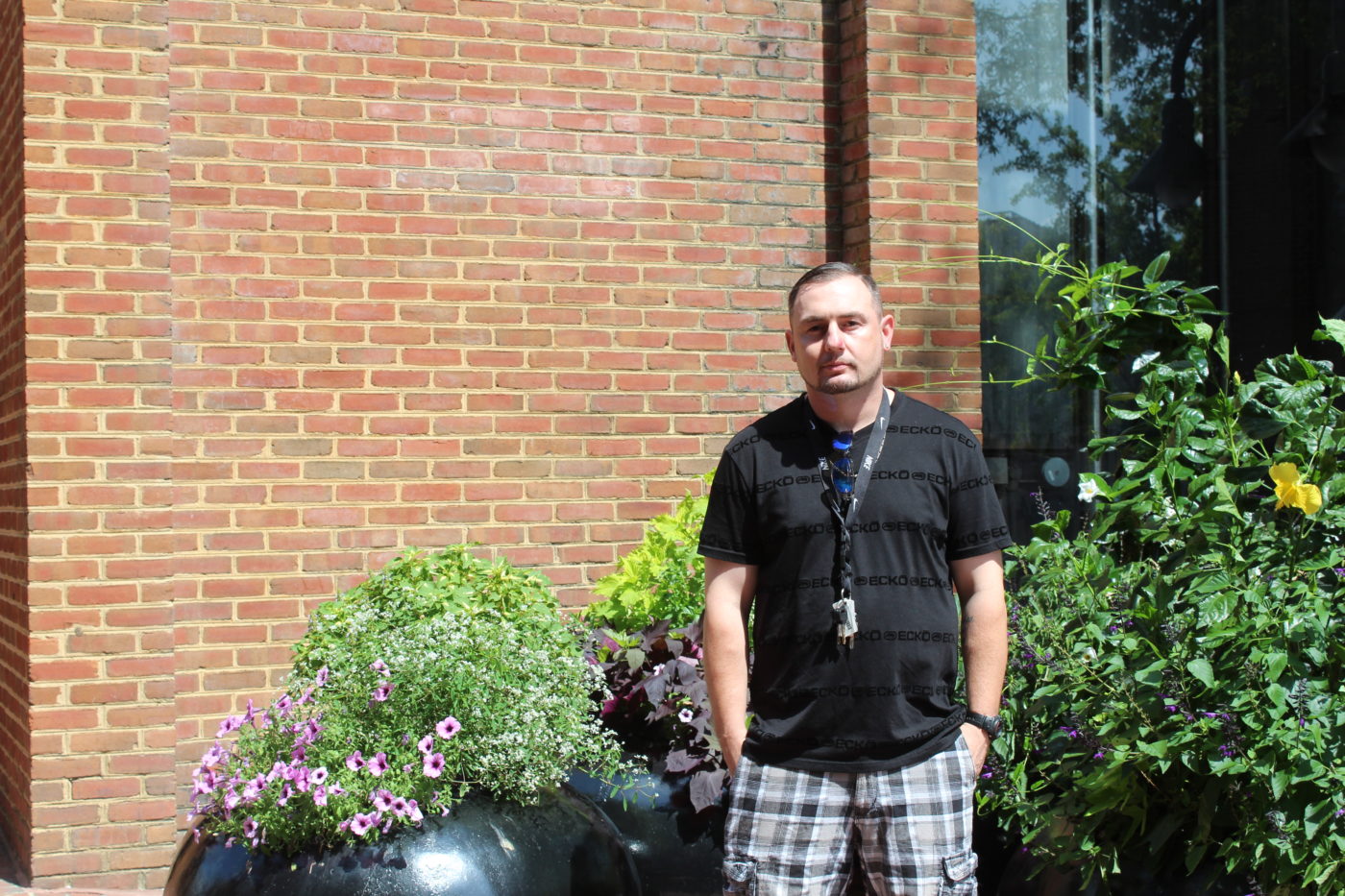 Gary Woodson, of Charlottesville, uses a Charlottesville Area Rental Assistance Program voucher to cover the difference between what he can pay and the cost of rent, but finding a place that accepted it has been difficult.

Gary Woodson has spent his entire life in Charlottesville. Right now, he works at White Horse Auto Wash while spending as much time as he can with his 3-year-old son. Eventually, Woodson hopes to become a peer support specialist.

His life today diverges sharply from that of two years ago — a time during which Woodson cycled in and out of jail and slept on the streets.

“I made a promise to me in my jail cell,” Woodson said. “That I would get out, straighten my life up and be there for my son.”

A year out of jail and two years sober, Woodson now lives at Oxford House, a drug and alcohol-free rooming home, and uses a Charlottesville Area Rental Assistance Program voucher to cover the difference between what he can pay and the cost of rent. The assistance allows him to save what he can while he works to maintain his job, which can be difficult given a back injury he suffered when he was 15.

“When it flares up, I was unable to even stand or sit,” Woodson said. “I just have to lay down and just relax.”

The city started its CSRA program in 2018 to supplement the Section 8 Housing Choice Voucher program, a federal subsidy controlled by the U.S. Department of Housing and Urban Development. While the Section 8 waitlist has been closed for years in Charlottesville, CSRA has helped 89 individuals and families secure housing in the city and Albemarle County since 2018.

However, the CSRA program isn’t without drawbacks — roughly 25% of those approved to receive the subsidy are unable to lock down a lease within the 120-day time limit.

In Virginia, landlord participation in housing choice voucher programs is voluntary, so many opt out entirely. HUD’s 2018 study of landlord voucher acceptance nationwide found that HCV-holders look at an average of 39 units before finding one that will accept a voucher.

According to Brenda Casteñeda, legal director of the Economic Justice Program at the Legal Aid Justice Center, many landlords turn away HCV holders to skirt additional protocol, and stigma plays a role as well.

“It’s a layer of bureaucracy: you have to deal with the [Charlottesville Redevelopment and] Housing Authority, you have to sign their paperwork, you have to have an inspector come out,” Casteñeda said. “I think the other reason that private landlords won’t [accept HCVs] is they just have a biased view of tenants who hold housing choice vouchers.”

Woodson is among the first group of individuals to participate in the CSRA program — a nascent, hyperlocal program relative to HUD’s nationwide HCV program, which began in 1974.

Advertised as a free-market solution to the affordable housing crisis, the programs aim to deconcentrate poverty by allowing low-income tenants to move to neighborhoods they would be otherwise unable to afford.

Both programs provide rental assistance to extremely low- and low-income households — defined by HUD as families earning under 30% of the area median income and under 60% AMI, respectively. On average, individuals and families utilizing CSRA vouchers earn annual incomes of 22% AMI. The AMI for Charlottesville is set at $89,400.

HUD and CSRA ask tenants to contribute 30% of their income toward rent. Vouchers cover the rest.

“We started administering the Charlottesville Supplemental Rental Assistance program … as we have a fairly lengthy waiting list for our Housing Choice vouchers,” Duffield said.

The two voucher programs share the same goal, but CSRA is focused locally. Unlike federal HCV holders — who can apply their voucher anywhere — CSRA participants must secure a lease in Charlottesville or Albemarle County.

I have a place to live now, and I'm not on the streets, but it's not the place I wanted because I wanted to have my own apartment — be by myself, have my privacy. But I had to do what I had to do. I didn't want the money to go to waste.

With these requirements in mind, Woodson began his housing search within Charlottesville city limits. After 60 unsuccessful days, he was permitted to look for housing in Albemarle — an option Woodson was unable to consider. Without a car, he relies on Charlottesville Area Transit to commute to work.

An assault and battery charge on Woodson’s criminal record further limited his scope.

“There were places that accepted housing vouchers, but when they did my background check, I couldn’t get in because of it,” he said.

The screening process to obtain a CSRA voucher is less restrictive than that of many landlords, making it difficult for some voucher holders to turn what seems like a golden ticket into reality.

“Even the most lenient landlords are looking for no recent convictions, no recent charges, no pending charges,” said Liz Nyberg, guest advocate at People and Congregations Engaged in Ministry. “No violent crimes of any sort. That can be someone had an altercation 25 years ago — it’s still going to affect their ability to rent.”

Nearing the end of his 120 days, Woodson retired his housing search.

He had been living at Oxford House since he left jail, so he contacted CRHA to see if he could apply his voucher there. Luckily, he could.

“I have a place to live now, and I’m not on the streets, but it’s not the place I wanted because I wanted to have my own apartment — be by myself, have my privacy,” Woodson said. “But I had to do what I had to do. I didn’t want the money to go to waste.”

Housing voucher discrimination exists nationwide, and Charlottesville is no exception. Without a state law banning source-of-income discrimination, localities alone are forced to address the problem.

“We’ve seen that as a barrier to people getting into places — needing assistance in understanding the landscape of the pool of housing, knowing what’s available and what they might be eligible for,” said Anthony Haro, executive director of the Thomas Jefferson Area Coalition for the Homeless. “That assistance is pretty crucial for someone to get into housing.”

At the local government level, a few programs are underway to incentivize landlord participation in housing subsidies.

“They’re all in their infancy, really,” Nyberg said. “They don’t really have legs yet.”

In June, CRHA approved the Housing Voucher Energy Efficiency Pilot — a program drafted by the Charlottesville Climate Collaborative in partnership with the Local Energy Alliance Program. The program aims to increase landlord acceptance of HCVs by upgrading participating landlords’ infrastructure to be more environmentally friendly.

The initiative will offer up to $10,000 in forgivable, city-funded loans to an expected 10 landlords to allow energy-efficient upgrades in their properties. In order to receive funding, property managers must commit to accept HCVs for five years with loans forgiven at a rate of 20% each year.

The pilot is expected to launch in September or October.

In June 2017, the City Council approved the creation of a Landlord Risk Reduction Fund. Headed by Stacy Pethia, the city’s housing program coordinator at the time, the fund promised to reimburse landlords who offered affordable housing for repairs if their rental units are damaged.

“[The] fund serves to mitigate risk by providing a pool of money from which landlords can draw if that tenant doesn’t take care of the property or meet their lease expectations,” Nyberg said.

Pethia now works for Albemarle, and her position with the city recently was filled by John Sales. Although a $75,000 allocation was agreed upon, the Landlord Risk Reduction Fund has yet to come to fruition.

Outside of Charlottesville, Housing Opportunities Made Equal created its Move to Opportunities program to help HCV holders in Richmond find a home within a “neighborhood of opportunity.” Launched in 2014, the program pairs voucher holders with a housing counselor who guides them through their housing search. At the same time, HOME educates, trains and builds relationships with landlords who don’t yet accept vouchers due to lack of knowledge or stigma.

According to Heather Crislip, president of HOME, the program successfully moves 150 families and individuals each year to higher-income neighborhoods. On average, clients move from census tract neighborhoods with an average 38% poverty rate to those with only 18%.

“Landlords are more often willing to take a housing choice voucher if the client is working with HOME, so they know that someone’s helping them with the logistics, process needs and educating them on their rights and responsibilities,” Crislip said. “We’ve had a lot of repeat landlords.”

Locally, Haro has been working to craft a similar program, called the Housing Navigation Hub. The Hub would ideally create a job position — and eventually multiple positions — tasked with maintaining an online listing of open affordable units in town while strengthening landlord relationships.

“It’s an idea that’s been used in other homeless service systems,” Haro said. “We just don’t have one here.”

Haro estimates the idea of a housing hub came about a year and a half ago — TJACH and its partners are just waiting for adequate funding.

In the meantime Nyberg and Niemeier have created a database of voucher-accepting housing and affordable housing options. They hope to shift their focus slightly to identify and characterize individual units, not just landlords. With this approach, they can personalize clients’ housing searches by number of bedrooms, wheelchair accessibility, location, price and other filters.

However, Crislip noted that local housing navigation initiatives can only go so far — banning source of income discrimination at the state level would make the biggest impact, she said. Currently, 11 states and more than 50 cities have enacted source of income laws.

“The effect would be that people couldn’t say that they would not take vouchers, but if the voucher would cover the cost of the apartment, the landlord would be obligated to take it,” Crislip said. “In those communities, vouchers are much more effective.”

Woodson’s CSRA program voucher expires in a few months. For now, he’s focused on maintaining a job and taking care of his son.

“I also have a dream of becoming a peer support specialist, so I can help other people that’s been in my situation,” Woodson said. “Right now, I’m just doing all the grunt work until something comes.”

Story updated on Sept. 17, 2019, to correct Todd Niemeier’s position and to note the city’s hiring of a new housing program coordinator.