Local stores struggle to stock baby formula amid a national shortage, leaving parents to search for formulas that work for their infants 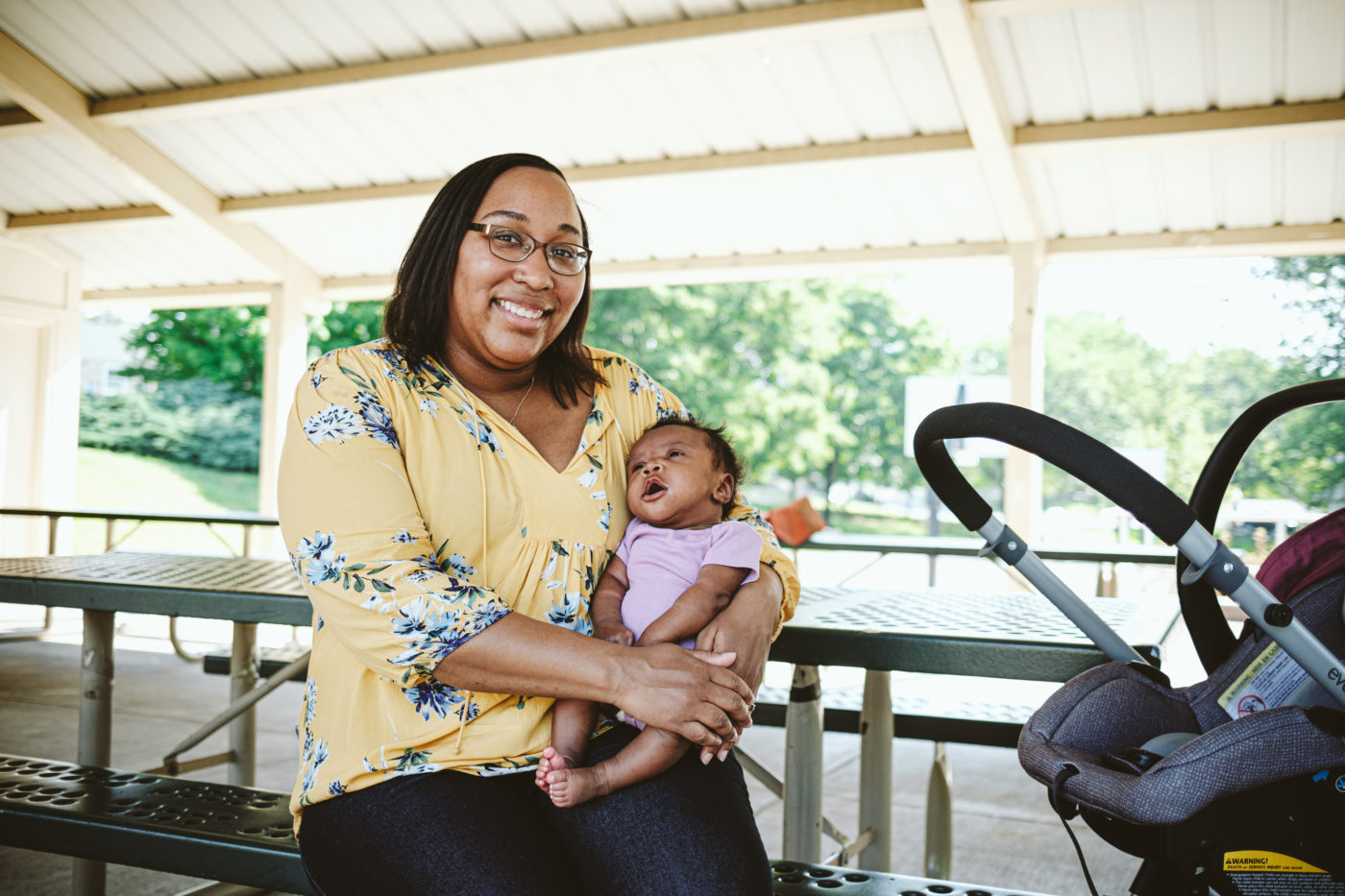 Shayla Washington, 37, has considered different options to feed her daughter while she couldn’t get her usual brand during the baby formula shortage. On Thursday, May 19, 2022, she had a four week supply of cans and was planning with her pediatrician to try a new brand.

Shayla Washington is stuck. She can no longer order her daughter’s usual baby formula online. Stores near her are completely out of the formula she needs. Delivery times have stretched out to weeks.

In the Charlottesville area, and nationwide, stores are experiencing shortages of baby formulas. For parents, it’s not just the lack of formula, but not having the correct types for infants with specific conditions or that have trouble feeding that is difficult.

“I’m really concerned about how millions of parents who feed their babies with formula are going to feed their children,” said Dr. Irène Mathieu, assistant professor of pediatrics at University of Virginia. 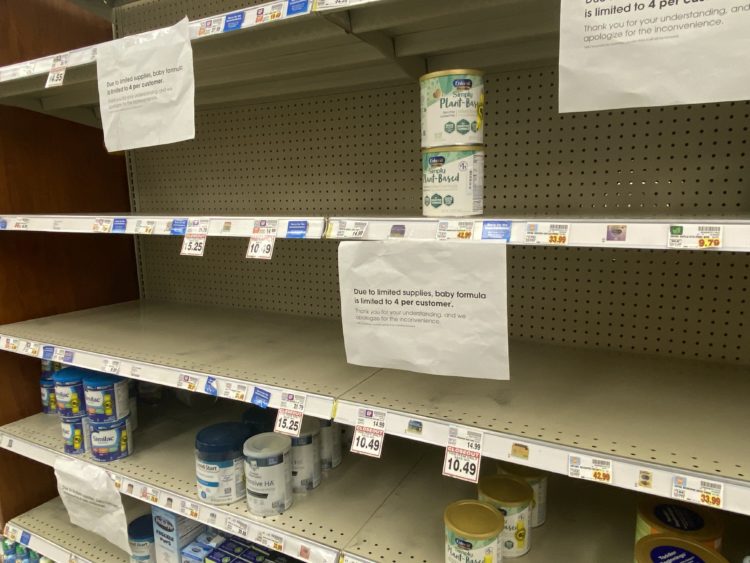 The Kroger Grocery store on Emmett Street struggles to fill their shelves with baby formula on May 24, 2022. Like other stores in the Charlottesville area, they are limiting how much each customer can purchase.

Relief is on the way, but there will be a gap in formula for some families. Pediatricians say that parents who are worried about their supply should call their health care providers to try to find the type that works best for them, or talk about alternatives.

Biden also announced an effort to import baby formula that meets U.S. health and safety codes. The second shipment of 114 pallets of hypoallergenic formula arrived at Dulles International Airport in Washington, D.C. from an air base in Germany earlier this week, the White House said.

Doctors foresaw the shortage, local pediatricians said. They were aware of problems in the supply chain earlier this year that have brought us to this point.

In February, a factory in Michigan was forced to shut down after reports of infants getting sick from formula from the plant. Access to some brands became spotty and the shortage worsened in the last few months because just a few manufacturers make baby formula in the U.S. Last week, the Food and Drug Administration (FDA) reached an agreement with Abbott Nutrition to reopen the Michigan plant, pending safety inspections, in mid-June. Abbott makes Similac and other brands of baby formula.

Efforts to combat the shortage have been tricky on the legislative side. Almost 200 House Republicans voted against allocating $28 million in FDA funding for inspections and tracking of baby formula last week. Rep. Bob Good, representing Virginia’s 5th District, was among those who vetoed the funding. He was nominated as the Republican candidate in this year’s convention. Yesterday, House members grilled the head of the FDA for its slow response to the crisis.

While politicians tussle over next steps, parents make do with few options.

Charlottesville pediatrician Dr. Paige Perriello advises parents to reach out to their pediatrician if their child requires a specific formula. Offices might have speciality formulas in hand, or can connect a family to a resource that does.

“It’s important to reach out to your pediatrician so that we can help be sure that families get the right formula for their baby, and that they know how to find it,” Perriello said.

Babies normally breastfeed or drink formula until the age of one. Formulas are made to ensure infants get the proper amounts of nutrients and calories. Perriello said parents should not use homemade recipes or add extra water to formula to stretch their supplies. Diluting the formula with water reduces how much nutrients a baby gets and in turn can hinder development. Infants who don’t get enough nutrients can have severe health complications.

“We know that there are families who are going to have difficulty finding formulas and we want to help identify those families so we can get them what they need,” Perriello said.

Low-income parents are especially vulnerable in the baby formula shortage, Mathieu said. Parents who use the Special Supplemental Nutrition Program for Women, Infants and Children (WIC) have limited options in terms of formula they are allowed to purchase, and typically do not have the means to purchase brands not approved by WIC.

“There are definitely parents here who are struggling to find formulas,” said Mathieu. “We have few grocery stores in the area, and we have patients who come from further out, from rural areas where there may be even fewer options.”

Many of the formulas removed from shelves following the Abbott Nutrition factory suspension were WIC-eligible. About 121,000 parents in Virginia are in the WIC program per year, according to the the United States Department of Agriculture.

“We know that children who live in poverty are less likely to have parents who are able to breastfeed or able to afford more expensive, specialty formulas,” Mathieu said.

In a statement, Abbott Nutrition pledged to offer coupons to parents in the WIC program who need to buy non-Abbott formulas through Aug. 31. The company said parents should submit receipts to Abbott or speak with their healthcare providers for more information.

Breastfeeding isn’t an option for as many parents as some people might think, said Dr. Mathieu. Some parents take medications that they cannot pass on the infant, and others simply do not have the time to sit and pump. They might not have parental leave or employment that gives them that space.

“Breastfeeding is not free,” Mathieu, also a new mother, said. Her job allows her to pump and store her milk while working, and at times she can work from home where pumping is a lot easier. Many parents don’t have the same flexibility.

Washington is feeling the pressure to pump more breast milk. Her daughter’s bilirubin levels were high, meaning she had an excess of the yellow pigment that comes from red blood cells. It’s common for newborns, who sometimes become jaundiced. Frequent feedings can help, but for Washington, breastfeeding her daughter wasn’t enough. The amount of milk she produced did not meet her daughter’s needs. Finding time in the day to pump is tough, the new mother said, and her daughter struggles to latch onto her mother’s breast.

“It’s a lot and it makes me feel stressed out like I need to just carve time out of my day to constantly do this or else.” Washington paused. That’s where using formula came in. Washington mixed the milk she was able to deliver with her baby’s formula. It allowed her daughter to get the nutrients she needed.

“In the meantime, where are we going to find this formula to feed her?” Washington asked. “We’re going to have to scramble and potentially try different formulas that might not work for our baby’s needs. It’s really hard for certain moms to strictly breastfeed.”

Pediatric Associates of Charlottesville, where Perriello practices, is asking for unopened, unexpired cans of baby formula, if you have them on hand. Community members can visit or call one of the group’s four offices to share their formulas.

“We don’t recommend that people go out and buy a whole ton of formula to give to us, because then that mother or caregiver who is at the store doesn’t have something to buy,” Perriello said.

In the meantime, Washington is feeding her baby girl with the formula she has left. She feeds her daughter roughly 24 to 30 ounces of milk and formula per day. She has enough for four weeks, she said. After that, she doesn’t know.

Washington went to her pediatrician’s office for formula two weeks ago. Her pediatrician offered the mother her usual Enfamill formula, but for lactose sensitive babies. Her seven week-old rejected the different formula completely. Other brands comparable to Enfamil’s Neupro are becoming less and less available.

Washington offered that lactose-sensitive formula to other mothers in a Facebook group. Within minutes, it was gone.

“I had to give those away to another mom in need, which is great,” Washington said. “But I still need formula for us.”

Want to read more about motherhood and parenting in Charlottesville? Here’s a story about the Black birth experience.