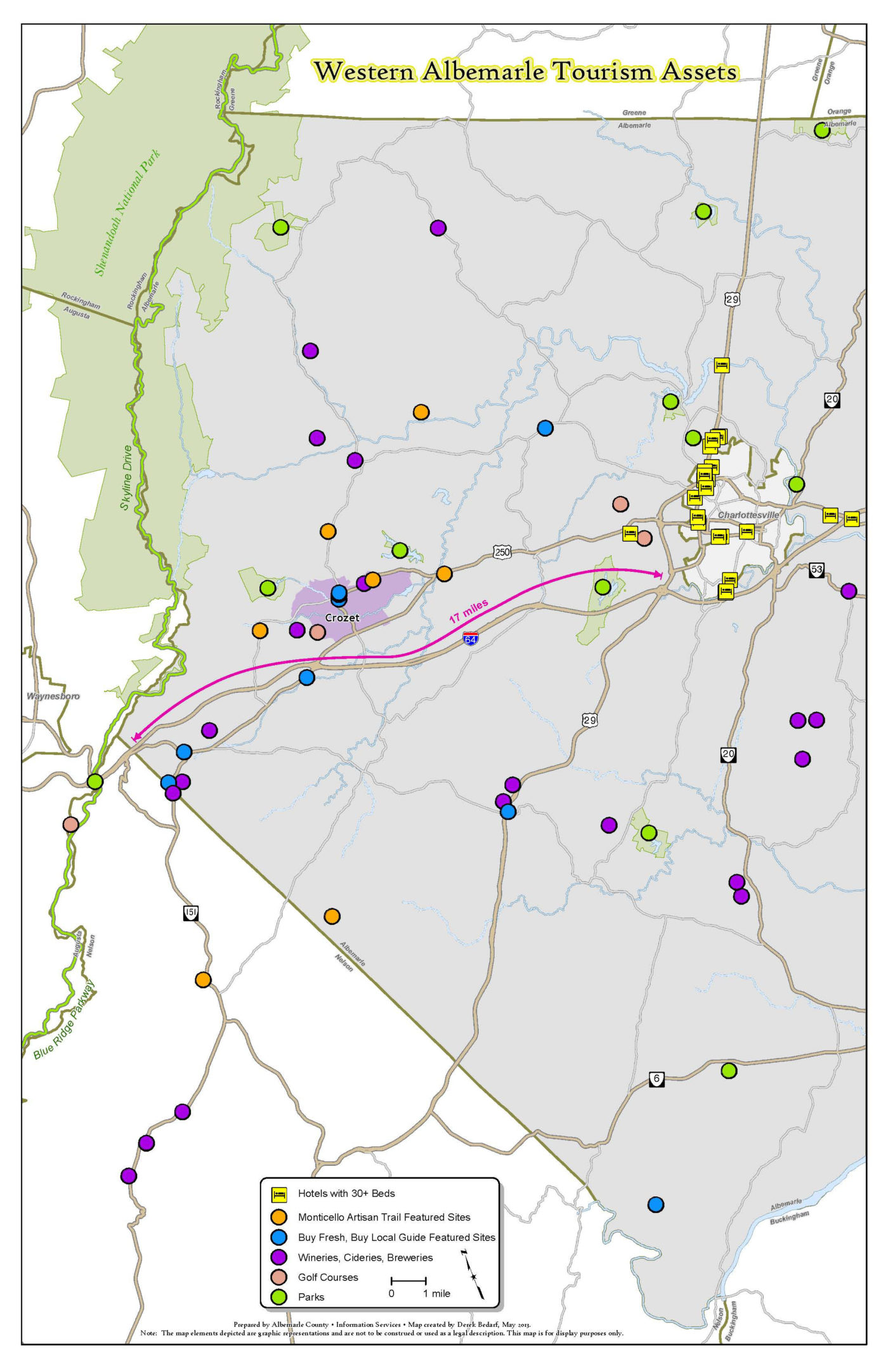 The tourism industry of western Albemarle and Nelson County, mainly Crozet and the Route 151 corridor, may soon get a long-awaited and, officials say, sorely needed lodging option.

Albemarle County will take steps to make itself eligible for a state financing program that could support the construction of hotels.

“One thing that became pretty obvious to us in this assessment was the lack of lodging options in western Albemarle County,” said Lee Catlin, county assistant for community and business partnerships. “Crozet is very strategically located between Charlottesville and popular destinations along Route 151 in Nelson County. Crozet is a gateway to many of the county’s most popular and attractive tourism assets.”

Catlin made her remarks at a meeting of the Albemarle County Board of Supervisors in early June. She went on to note that anybody who wants to stay overnight in the area is forced to travel to Charlottesville or Waynesboro.

The board voted 4-1 to have staff prepare an ordinance creating a tourism zone as part of the Virginia Tourism Development Corp.’s Financing Program, a state-established program that targets crucial tourism deficiencies.

According to a report prepared for the board, “the program enables localities to provide economic and regulatory incentives for tourism development projects that are identified as critical to local economic development. … Projects in tourism zones are eligible for economic and regulatory incentives, such as reductions in fees and pledges of gross receipt taxes, for up to 20 years.”

Gap financing is generated from state and local sales tax revenues from the new-business activity. The incentives are not available for existing businesses.

“I think it would be very good for the local agri-tourism,” Andrew Hodson, the owner of Veritas Vineyards, said. “The reason it is good is because we have quite a cluster of sights in the Crozet, Nellysford area.”

There are at least 12 wineries, breweries or cideries, as well as several parks, artisan sites and golf courses, within a short driving distance of downtown Crozet.

Some of these destinations can be found along two tourism paths in Albemarle and Nelson counties — the Brew Ridge Trail and the Monticello Artisan Trail.

Hodson noted that Veritas Vineyards had a small bed and breakfast on site, but it was not large enough to host large parties such as those from a wedding.

“We host a wedding a week,” Hodson said. “These weddings have had a huge impact on making [Veritas Vineyards] sustainable.”

Both Catlin and Hodson stressed the need to preserve the unique landscape of the area, as well as the local feel of the businesses.

Hodson explained that small operations, such as his [Veritas Vineyards], Blue Mountain Brewery and others, are much more vulnerable to decline.

“We must maintain the rural and natural environment of the area while also providing local businesses the revenue they need,” Hodson said. “Just as craft beer appeals more to people than Budweiser, so do artisanal wines.”

Catlin said the county’s economic development team is supportive of having a small hotel, one that keeps the character of Crozet intact, while filling the critical deficiency for adequate lodging. She estimated a future hotel would have between 30 to 60 rooms.

Catlin also noted that there has been talk of a hotel being constructed in the Old Trail development.

In February, Rutherford Hospitality LLC filed an application for a four-story, 43-room hotel at Old Trail. It includes a 1,000-square-foot restaurant and associated parking.

“I haven’t heard much since we provided the developer with our initial comments,” said Albemarle planner J.T. Newberry. “The ball is in their court.”

Representatives of Old Trail Village did not respond to requests for comment on the hotel application.

Catlin said that, depending on its timing, the hotel in Old Trail could fulfill the need for lodging in western Albemarle and could qualify for the incentive financing set forth in the program.

Supervisor Dennis S. Rooker supported the measure but with “caveats.” He said he wants to narrowly define the projects acceptable to be within such a zone to protect against future problems.

“I don’t want us to go down the road of being open to every new person coming in with an idea thinking they are entitled to not pay any sales tax for the next 20 years,” Rooker said.

Boyd voted against the development of the ordinance, which will be brought back to the board at a future meeting for review.