Development on East Rio Road deferred in debate over proffers 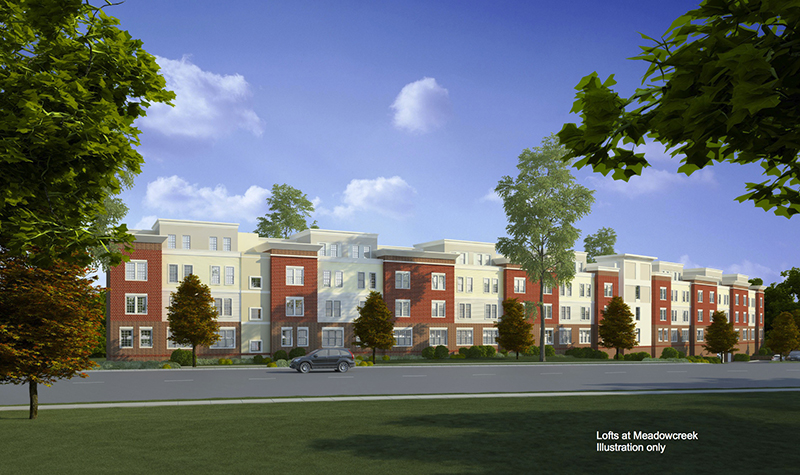 Rendering of the proposed Lofts at Meadowcreek along East Rio Rd

Developer William Park has deferred indefinitely his plans to build a 65-unit apartment complex on East Rio Road. The project, The Lofts at Meadowcreek, would have required the Albemarle County Board of Supervisors to rezone a 2.8-acre lot for greater density.

“The cash proffers are the big issue,” Valerie Long, an attorney representing Park, told the board at its meeting Wednesday. “There’s a total cash proffer expectation of almost $754,000.”

Proffers are generally the voluntary contributions a developer makes to mitigate the impact of a project. Albemarle also has affordable housing proffer standards and a set of cash proffer expectations for each type of residential unit being built.

Currently, the county asks developers to proffer $19,753 for each single-family home, $13,432 for each townhome and $13,996 for a multi-family unit. Charlottesville does not have a cash proffer policy.

Park had hoped that the Board of Supervisors would waive much of the proffer sum as a reward for Treesdale Park, the nearby 88-unit affordable housing development that Park built in partnership with the Albemarle Housing Improvement Program in 2010.

“The Treesdale project was affordable to such a challenging income population — it was double the county standard — so we are proposing a $5,000 credit per unit for that aspect,” Long said.

“In addition, it will stay affordable for 10 times longer than the county standard, so we’re proposing another $5,000 per unit for that,” she said.

Jennifer Jacobs, executive director of AHIP, spoke in support of the project.

“As a housing advocate, I believe it is imperative to create and ensure a continuum of housing opportunities,” Jacobs said. “When a Park’s Edge resident with an income of $12,000 a year has advanced economically and is ready to leave but still can’t afford to buy a house in Albemarle, a place like the Lofts at Meadowcreek might add some options for her. This is the essence of mobility.”

But some residents of the Rio Road area came to the hearing with strong convictions that waiving proffers for The Lofts would be a mistake — regardless of the merits of Treesdale Park.

“If you are going to support development in growth areas, you need to support that by giving residents safe ways to get to trails that are right down the street, that we spent millions of taxpayer dollars to build,” said Greg McFadyen.

“In order to fund those improvements, do not waive or reduce the proffers on new developments,” McFadyen urged the board. “If the builder wants to build new housing, he needs to pay the price.”

Supervisors agreed, deciding not to relax the cash proffer policy for The Lofts. Supervisor Dennis S. Rooker pointed out the dangers of making even one exception to a long-held standard.

“How do we rationalize requiring no cash proffers for the project when we have a cash proffer policy in place that has applied to every rezoning in the county since we adopted it?” he asked.

“I think we would be making a big mistake to isolate this project, treat it differently, and say they don’t have to pay any cash proffers. If it becomes just picking and choosing, we don’t really have a policy,” Rooker said.

Supervisor Duane E. Snow wanted to know whether the county had ever allowed a developer to accumulate credit for affordable housing built as part of former projects, as Park was proposing to do.

Rooker said he thought not.

“Treesdale was built with the affordable housing requirements imposed on it because AHIP required that in the deed by which they sold the property,” Rooker said. “I do not think when this developer buys another property — not from AHIP, without deed restrictions — that we should abandon our policy.”

Supervisor Kenneth C. Boyd said he felt the proffer policy was in need of reform. However, it would best be done in a future discussion rather than a public hearing.

“We’re talking about a matter of months before we get this sorted out,” agreed Supervisor Ann H. Mallek.

The board asked Park to either follow the normal cash proffer policy or suspend the project until a deeper dialogue about the proffer policy could be had.

“I think it would be reckless for us to say that you all should go vote on it right now,” Park said. “The prudent thing would be to defer it. But I can say with 100 percent certainty that if we have to pay these proffers, then our particular project will not go forward.”