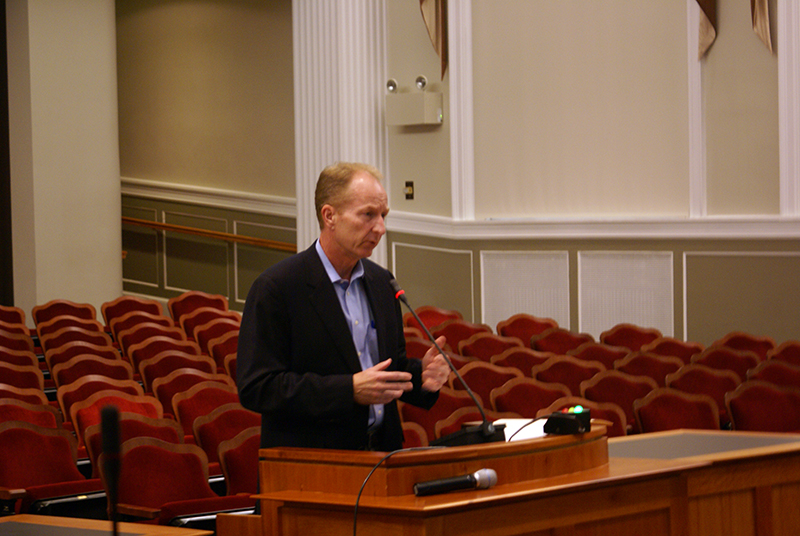 The Albemarle Planning Commission has recommended approval of a 65-unit apartment complex on Rio Road East, despite concerns that the surrounding area is developing faster than new infrastructure can be built.

The proposed ‘Lofts at Meadowcreek’ is the latest residential project planned for a small stretch of Rio Road, joining the ranks of Belvedere, Dunlora Forest, and Lochlyn Hill. All of those subdivisions are in various stages of planning and construction.

William Park, president of Pinnacle Construction and Development Corporation, asked the commission to recommend the rezoning of a 2.83-acre lot near Pen Park Lane for a new loft-style apartment complex.

The project would include 65 apartments, each with 18-foot ceilings, built atop an underground parking bay. With 13 affordable units and another 13 priced somewhat below the market rate, Park said, the complex is meant to complement Treesdale Park, an affordable housing development built by Pinnacle in 2010 for the Albemarle Housing Improvement Program.

“We looked at Treesdale and we thought that maybe it’s time for a phase two,” Park told the commission. Treesdale Park now houses more than 80 families earning 50 percent or less of the area median income.

“What we’re trying to target here is the young urban professionals and active retirees,” Park added. “At the end what we see is a truly mixed-income product.”

The commission voted unanimously Tuesday to recommend the rezoning for approval.

Park isn’t the only developer hoping to appeal to a special niche of buyers.

Dunlora Forest, a 99-unit project just down the road, is designed to accommodate seniors and the disabled.

“Dunlora Forest will be built with an aging population in mind,” said Charlie Armstrong, vice president of land development at Southern Development, in an interview. He cited features such as first-floor bedrooms, wide hallways, and easy-to-reach outlets.

Although the final site plan for Dunlora Forest was not approved until February, Armstrong said that most of the neighborhood roads are nearly complete. “Landscaping will begin in the next week,” he added. “It will begin to look like a place shortly.”

Meanwhile, the massive Belvedere neighborhood across from the Charlottesville Albemarle Technical Education Center is preparing to enter its second round of construction. 51 new single-family homes will join close to 460 existing units by spring of next year.

At Tuesday’s meeting, one commissioner expressed worry that Rio Road East has few provisions for pedestrian safety and that approving one more development may make the situation worse.

“I think there are a lot of laudable aspects about [the Lofts at Meadowcreek], but I am still really concerned about crossing Rio Road,” said Commissioner Rick Randolph. “If there are young people here, let’s be realistic, they are not going to walk all the way down to Pen Park Crossing. They’re going to cross the street.”

Randolph suggested that asking the developer to provide a crosswalk could improve the situation.

“It could be some kind of crossing light where pedestrians can safely get across,” Randolph said.

Dave Benish, chief of planning for Albemarle County, warned the Virginia Department of Transportation is unlikely to permit midblock crosswalks.

Another concern voiced by the commission related to the proposed Charlottesville Area Transit Route 11 running along Rio Road from the downtown to the Fashion Square Mall.

Both Charlie Amstrong and Bob Hauser, the developer of Belvedere, thought Rio Road residents would benefit from Route 11. “It would be fantastic,” said Armstrong. “I’m surprised there isn’t one already.”

Transit consultant Nelson Nygaard recommended against running the new route along Rio Road earlier this year, but the Albemarle Board of Supervisors voted earlier this year to allocate $47,000 a year to pay for service on Rio Road East. Council will make a decision later this summer.

The next step for the Lofts at Meadowcreek will be to secure a rezoning by the Board of Supervisors. A date for the hearing remains to be set.