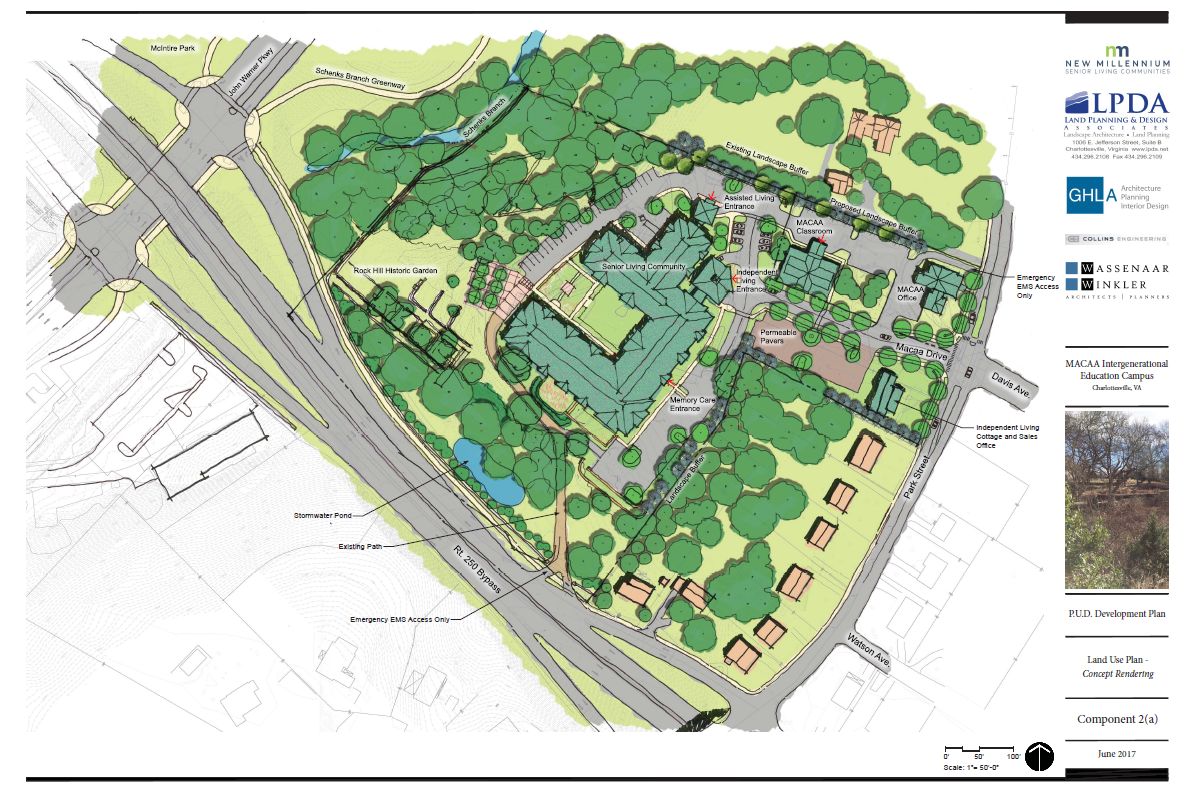 A local nonprofit’s request to build new headquarters as part of an “intergenerational campus” at its existing property on Park Street will go before Charlottesville’s Planning Commission on Tuesday.

The Monticello Area Community Action Agency is partnering with New Millennium Senior Living Communities on a proposal to build a 150-room senior living facility at the site of the former Rock Hill Academy.

“We got the idea from [the Jefferson Area Board for Aging] to have an intergenerational living environment where our 3- and 4-year-olds can interact with the senior citizens,” said Harriet Kaplan, MACAA’s executive director.

MACAA, founded in 1965, seeks to eradicate poverty in the community. One of its services is a Head Start program for pre-kindergartners from low-income families. Other programs include Project Discovery, a college preparatory program, and Hope House, a transitional housing program.

The partnership has filed an application for a rezoning of three parcels on Park Street from single-family residential to planned unit development zoning.

Under the plan, MACAA would move its operations into the renovated and restored Stone House at 1021 Park St. A new school building would be constructed behind that structure. An existing building at 1023 Park St. would be demolished and replaced with a new two-story cottage.

But the centerpiece of the proposal is the construction of a five-story senior living center on the land currently occupied by MACAA.

Because of an advertising error, the Planning Commission will hold an informal public hearing on Tuesday followed by a formal one in September. One resident of the neighborhood is glad for the delay.

“Most people I know in the neighborhood who have an opinion about this are opposed to the five-story development and are out of town or out of the country,” said Cecilia Mills, a resident of nearby Wilder Drive.

“Staff finds the proposed density is not consistent with the city’s future land use map,” said city planner Heather Newmyer, adding that she also has concerns about the massing and scale of the project.

However, she said the proposal would increase pedestrian connectivity to Rock Hill Gardens, create as many as 85 new jobs and provide additional housing for the area’s aging population.

“Staff is aware that the partnership will sustain MACAA, where otherwise MACAA might not be able to continue, given their financial situation,” Newmyer said.

Kaplan acknowledged that MACAA’s finances have suffered in recent years due to reduced funding from federal, state and local governments. She said this proposal offers a chance for the agency to survive and to enter a new era.

“We determined that we really wanted to stay in the neighborhood,” Kaplan said. “This is our home. We also determined we didn’t want to sell it to just any developer. We wanted something that had more meaning for us.”

Newmyer said the potential for increased traffic at the site is an important factor of the commission and City Council’s decision. The existing conditions generate about 86 vehicle trips a day and motorists are now allowed to make left turns out of the property.

A traffic study projects an increase to 486 trips per day with most of the increase related to staff at the senior living facility.

To accommodate the additional traffic, the applicants are proposing creating a turn lane and reorienting the driveway so it is directly across from Davis Avenue. A sign warning motorists of the intersection would be built.

Newmyer also suggests a pedestrian crossing sign could be located at the intersection, but that is not currently part of the proposal.

The Rock Hill Gardens on the site would remain. There is a possibility the project would allow for a connection between the gardens and the John W. Warner Parkway trail.

“Staff believes preserving the Rock Hill Gardens and opening them to the public for access is a vital part of this PUD development plan,” Newmyer said.

Mills said she would like to see the zoning remain the same and to have single-family homes built on the property.

“What we really need in this neighborhood is housing for working families or at least affordable options for seniors,” she said.

Mills is concerned that if the rezoning is granted, the existing owners could decide not to move forward and then sell to another developer who might build something different.

Mills said she would like to see community space in the complex, such as a bar or coffeehouse.

“There’s nothing that includes the neighborhood in this,” she said.

Kaplan, who said she is a resident of the neighborhood, said MACAA will continue to be a good neighbor, but that the existing building is deteriorating and the agency needs a sustainable solution.

“Doing nothing is not an option for us,” she said. “We have this asset and we have to monetize it. This is the best use of all of the things that have been proposed.”