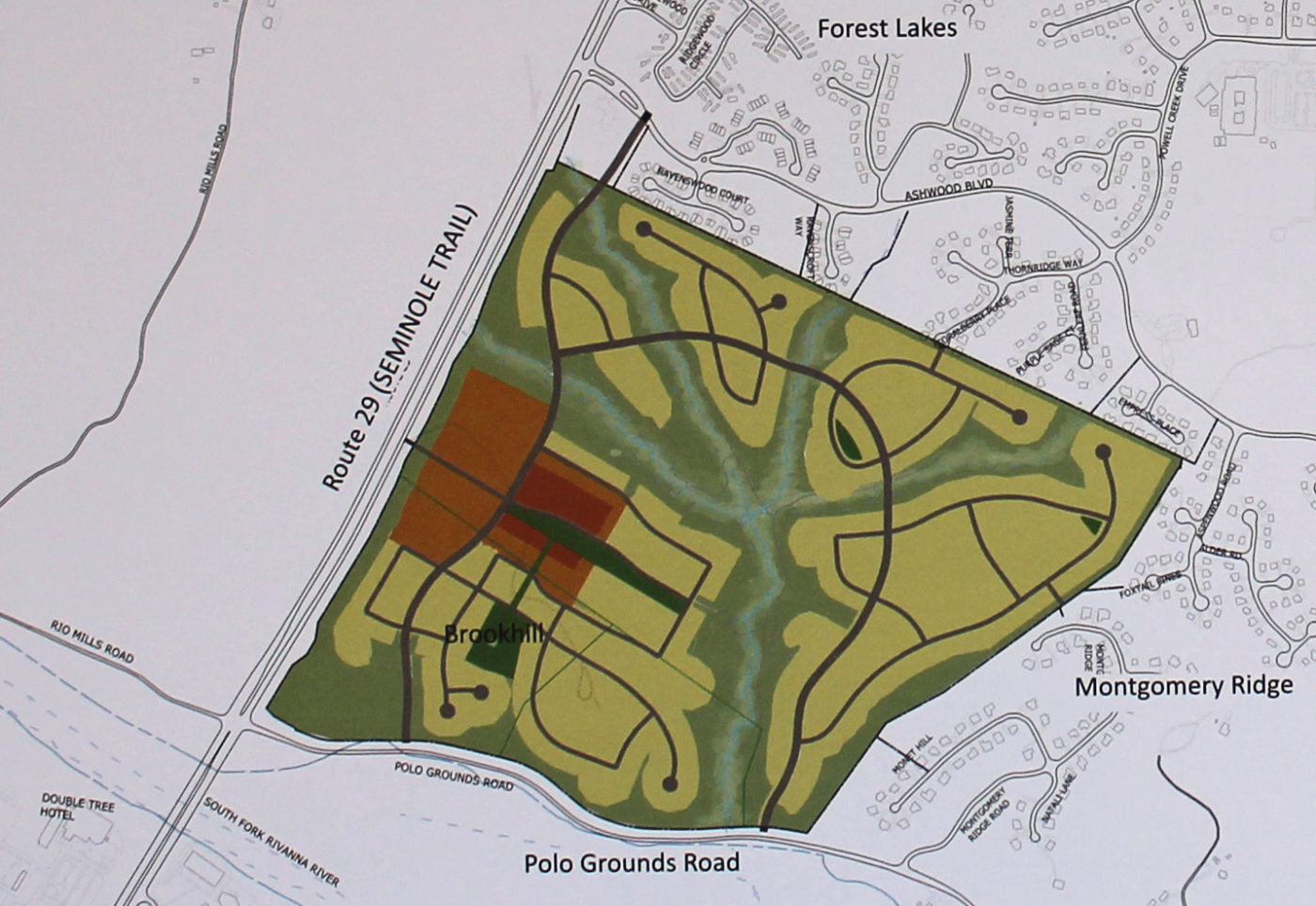 Residents of the Forest Lakes community gathered recently for the first of several neighborhood brief-ings on a new development project that would transform the corner of U.S. 29 and Polo Grounds Road.

Riverbend Development told a gathering of about 45 people that it has three parcels totaling 300 acres under contract. In three years the company plans to start construction of the Brookhill neighborhood, which will include between 600 and 800 residences, mostly single-family detached homes.

Brookhill also would include a commercial area with access along U.S. 29 between Polo Grounds Road and Ashwood Boulevard. The mixed-use town center would include an as yet undetermined amount of additional higher-density housing. [view larger map]

“The basic concept for this property comes from Albemarle County’s Comprehensive Plan,” said land-use planner Ashley Davies, of the law firm Williams Mullen. “We are following exactly what the county laid out for this property, which is low-density residential … with an urban mixed-use feel in the middle.”

“We want to alleviate fear of the unknown and concerns, and part of that is showing that this property will really emulate the same development patterns as Forest Lakes,” said Davies. “It will look and feel like an extension of your neighborhood.”

The land is inside the county’s designated growth area and abuts Forest Lakes South and Montgomery Ridge. The developers said their plan hinges on the county approving a rezoning of the property.

Residents who gathered at the Forest Lake North Pavilion peppered the development team with questions on road interconnections, school redistricting, buffers and the nature of the retail shops.

“That’s a lot of homes in an already very busy area, regardless of what the county is saying about this being a dense area in order to protect the rural areas,” said one resident who declined to give her name. “We’d like to protect some of the beauty we have here without having more and more people thrown in here as people have done on Pantops.”

Riverbend president Alan Taylor said the scale of the town center would be similar to what exists at Old Trail Village in Crozet.

“The intent of this is absolutely not a destination shopping center,” Taylor said. “This will be very small neighborhood retail services … where you can have a coffee shop or a dry cleaners.”

Taylor was quick to point out that if the Forest Lakes Community Association opposed the Coralberry connection, they would take it out of the plan.

“The county wants us to make these connections because one of their major policies is to interconnect all the neighborhoods together,” Taylor said. “This cul-de-sac on Coralberry was meant to be interconnected. But, I get it, everyone loves their cul-de-sacs.”

Based upon the strong opposition in the room, community association board member Scott Elliff said Coralberry should be “off the table.”

“We have always been active in protecting what we have here in Forest Lakes,” Elliff said. “We will continue to work with the county and this developer on all the details that affect us.”

Residents remained puzzled about the efficacy of the connection intersecting Ashwood Boulevard at a point about 400 feet from U.S. 29. Taylor said the parallel road has been a priority in the county’s master plan.

“The county is telling us we have to do it,” Taylor said.

One neighbor suggested a petition be circulated and sent to the Board of Supervisors opposing the Ash-wood connection.

Davies and Taylor emphasized that the Brookhill plans are very preliminary and subject to change with community input.

Traffic studies are underway, and Riverbend said it will have to work with the Virginia Department of Transportation and the county on the final road plans.

Taylor said they were recommending the retail center have a new traffic signal and median crossing on 29. After the meeting, Taylor said VDOT has thus far expressed preference for a right-in, right-out-only configuration and no traffic signal.

“We are at a very conceptual phase and that’s where we wanted to begin with each of the neighborhoods in the area,” Davies said.

Taylor said he will meet with the Montgomery Ridge neighborhood Monday.

One resident said she appreciated the developers reaching out to the community.

“I am glad they came out and were open to the questions asked,” said Jane Keathley, a 19-year resident of Forest Lakes. “They gave thoughtful answers. I am happy not to have the cut-through on Coralberry.”

“I think he sounded very responsive to everything the community mentioned,” Elliff said.