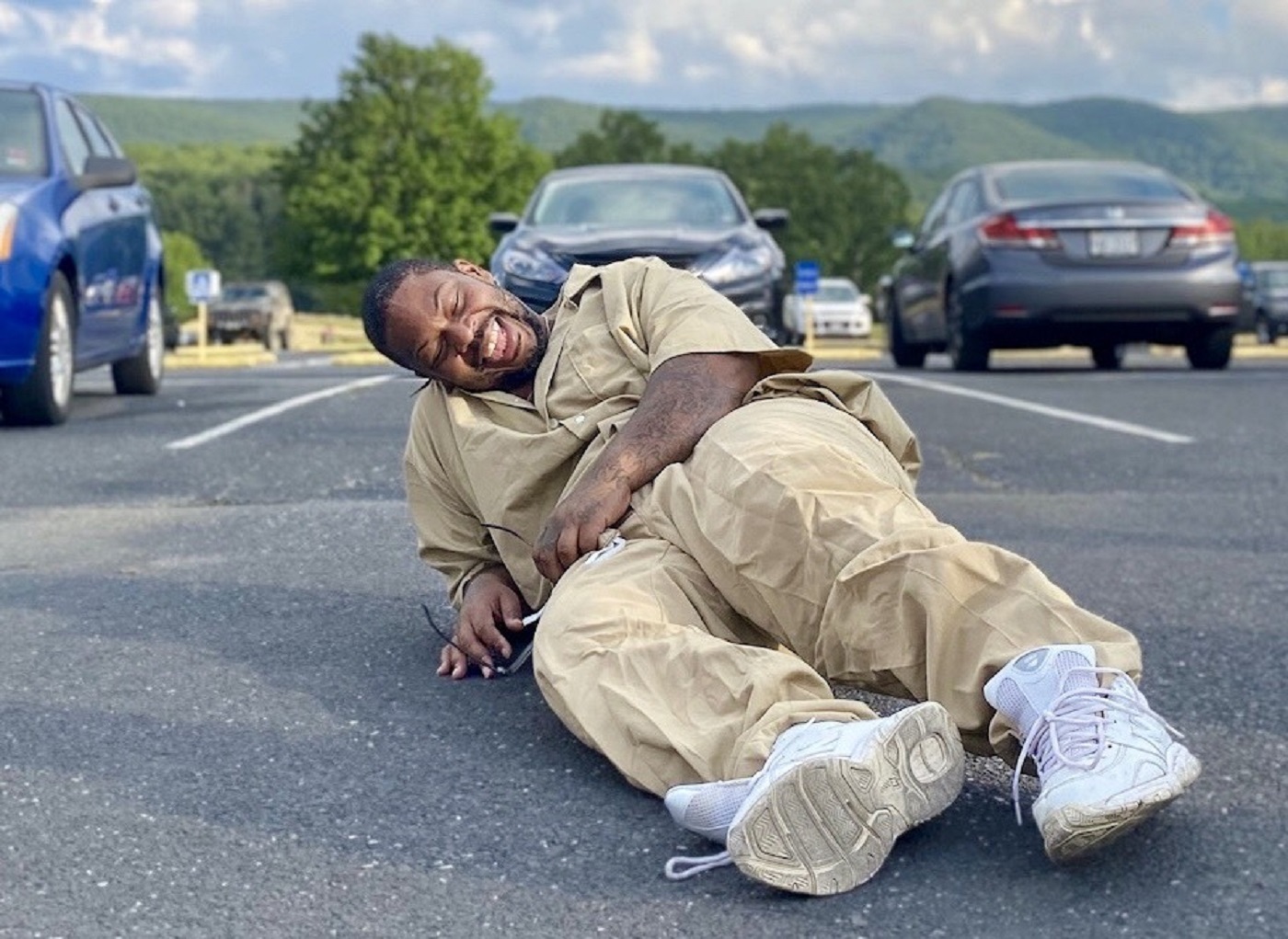 Rojai Fentress, 40, lays on the parking lot of Augusta Correctional Center moments after he is pardoned. He served 24 years for a murder he says he did not commit.

Credit: Photo courtesy of The Innocence Project at UVA

Rojai Fentress was 15 when, as he waited in a line with his mother to register for school, two police officers arrested him on a charge of murder.

The Richmond teen was baffled.

“I just thought this would be over soon, because I didn’t know what they were talking about,” Fentress said.

That was 1996. A year later, a 16-year-old Fentress was convicted of murdering Thomas Foley in the breezeway of a Richmond apartment building where Foley was trying to buy crack cocaine.

His punishment — 53 years in prison.

“I fainted when the jury came back with the verdict,” Fentress said. “All I remember was the bailiff came and picked me up off the ground. I didn’t understand how this was happening. I didn’t do it.”

For the next 24 years, Fentress continued professing his innocence. It seemed like no one would listen until finally, in 2014, another man confessed to killing Foley in that breezeway.  Fentress was convinced that confession would change everything. He wrote a petition for habeas corpus — a legal proceeding in which someone may claim unlawful imprisonment and ask a judge to free them.

But the judge swiftly denied Fentress’ petition. DeAnthony Doane, the man who had confessed to Foley’s killing, had been convicted of a different murder several years earlier. He had also met Fentress in prison. That made him an uncredible witness.

Without habeas corpus, Fentress’ only hope was a gubernatorial pardon, Hatchett said. So the pro bono clinic, which uses volunteer law students, filed a pardon petition on Fentress’ behalf to Gov. Terry McAuliffe in September 2017.

For three years, they waited. Then, on July 1, as Fentress was returning to his cell from his shift working at the prison shoe plant, the prison counselor asked to see him.

“I was thinking it was going to be bad news,” Fentress said. “But he just said, ‘You’re going home.’”

Fentress was still in shock as he hurriedly signed his release papers and was escorted to the front of the building. 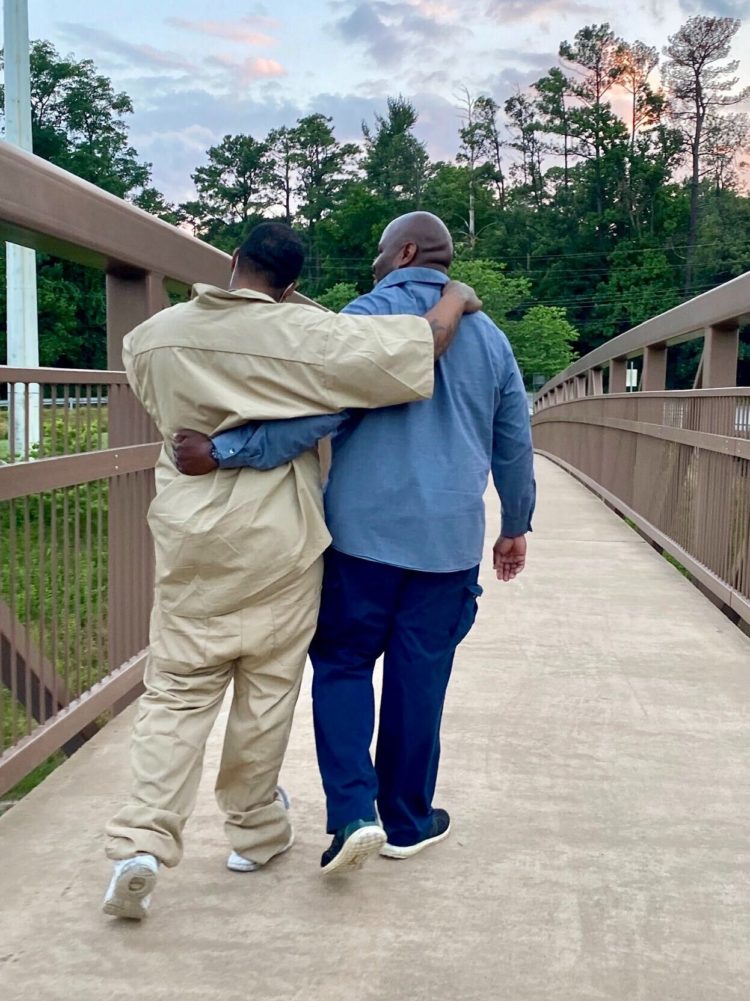 Rojai Fentress walks with his brother shortly after his release from prison on July 1.

Credit: Photo courtesy of The Innocence Project at UVA

And just like that, 24 years after the Richmond teenager was imprisoned, he was set free a 40-year-old man.

“It was a beautiful day,” Fentress said in a soft voice.

Fentress is one of about 25 cases The Innocence Project at UVA is actively working on, Hatchett said. The pro bono clinic has a backlog of hundreds more.

“We get more inquiries every day,” she said.

Estimates vary on the number of truly innocent people convicted of crimes in the United States, Fentress said. But, she believes the number is large. She said many innocent people simply confess to crimes they didn’t commit because prosecutors push the accused to take plea deals for lesser sentences rather than risk going to trial.

This is what the prosecutors in Fentress’ case did. Before his trial, they offered the teen a plea of five years in prison.

“I told my attorney I would not take the plea,” Fentress said. “He said I should take it. I said, look, you don’t understand, I didn’t do it. He said, it doesn’t matter.”

Fentress’ case hinged on the testimony of a single eyewitness — the victim’s friend, Julie Howard, who was with Foley the night he was shot.

Howard testified that on April 13, 1996, she saw Fentress come to the car that she and Foley were in to sell them the drugs. Foley thought he was being shorted, so he followed the man she said was Fentress beneath a breezeway where he was shot, Howard testified.

Howard has since died.

“Before the trial [my mom and I] were trying to figure out what the hell we were doing on April 13,” Fentress said. “It was a normal night. There had never been an occasion at 3 o’clock in the morning where I was outside. My mother would not have allowed that.”

It later came out that Howard had previously identified a different Black man as the person who approached the car. That fact had been withheld from Fentress’ defense attorney, Hatchett said. And the detective on the case lied on the stand, telling the jury that Howard had only ever identified Fentress.

That detective has also since died, Hatchett said.

Fentress languished in prison for nearly two decades with little hope of release until, by chance, he met Doane, who is the same age as Fentress. Doane was serving a sentence for second-degree murder for a crime he committed in 2006.

Fentress happened to overhear Doane talking with other inmates about a white man he’d shot beneath a breezeway at a Richmond apartment in 1996.

“I had to be careful how I talked to him about it, because I didn’t want to be labeled a snitch,” Fentress said. “But, I eventually approached him and explained to him what had happened to me and that he was the reason that my life was the way it was. He had no idea someone else had been charged with the crime. He said he would do what he had to do to help me.”

Doane signed an affidavit confessing to killing Foley in 2014.

After a judge denied Fentress’ petition for habeas corpus, and his pardon petition sat on the governor’s desk for three years, The Innocence Project decided to take one final shot at freeing him.

In late June, the group launched a social media campaign and gathered thousands signatures on a change.org petition from people saying Fentress should be freed.

About a week later, Northam signed the pardon.

Fentress’ pardon is conditional. He is still a convicted murderer, still labeled a felon and will be on probation for three years.

The Innocence Project intends to continue working to fully exonerate Fentress and have his record expunged. And, although that is Fentress’ hope as well, for now, he’s too busy enjoying freedom to think about much else.

“I want to go to college,” Fentress said one afternoon last week as he sat on his brother’s front porch in Richmond. “I’m 40 years old now. I don’t have any time to waste. I’m ready to proceed with my life.”

Fentress is staying with his brother while he works out what his life will be now. He’s applied to a community college and he’s thought about becoming a youth mentor to help keep kids from making the kinds of mistakes that would send them to prison.

The law students at UVA started a GoFundMe page for Fentress to help him start his new life.