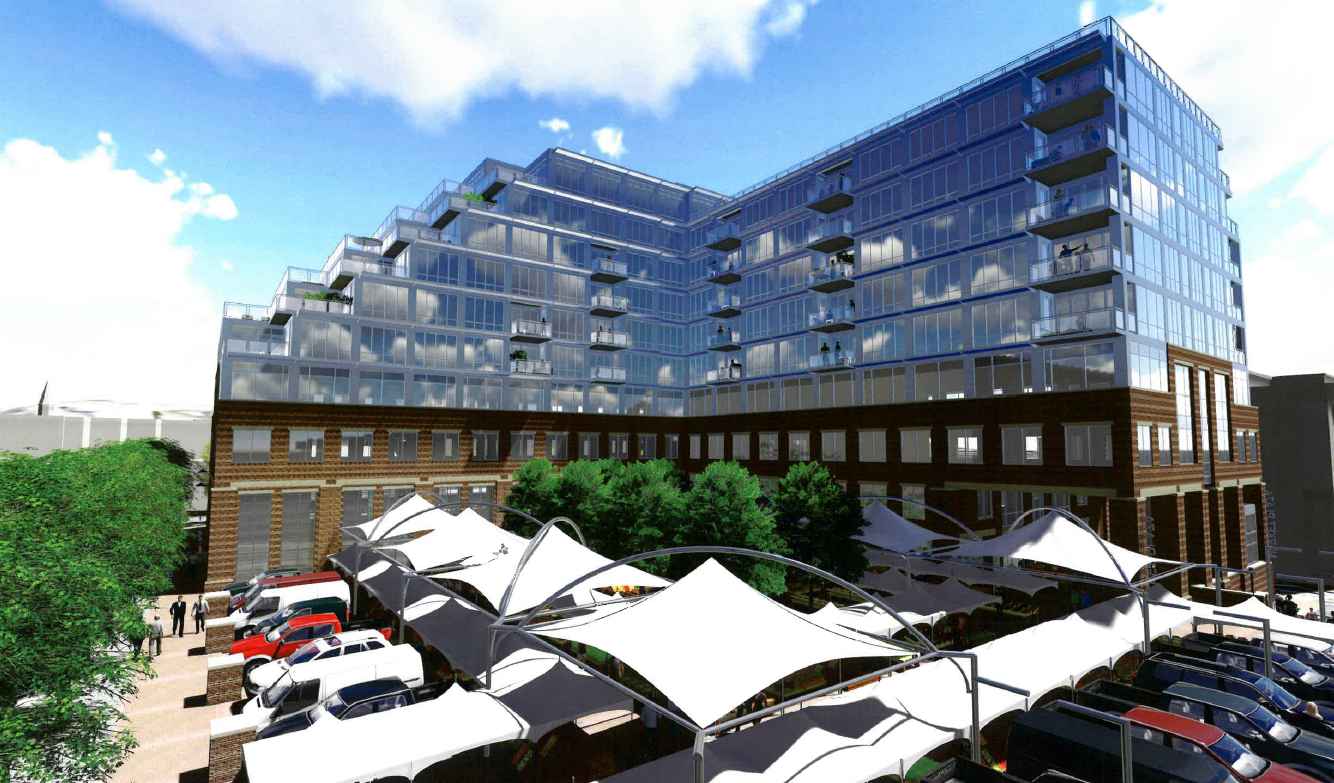 Rendering of how Market Plaza might look on Market days

The Charlottesville City Council unanimously agreed Monday to amend a special use permit previously granted to the developers of the nine-story Market Plaza on Water Street.

The council also looked favorably on a $2.4-million sales agreement that will guarantee the continued existence of the City Market on a portion of the property.

“We are really lucky to be able to have both the public space for our city market and a development downtown,” said Councilor Kristin Szakos.

In December 2013, the council agreed to offer the land to developers following years of discussion about where to locate a permanent home for the market. Four teams responded to their request for proposals, and the council eventually selected the one led by architects Gregory Powe and Keith Woodward.

Their proposal originally called for the market portion of the development to be deeded over to the city. That was codified in a special use permit the City Council approved last December.

However, as details for the project were worked out, an agreement arose to have the space remain privately owned and rented out to the city for the market.

A representative from the Market Central organization is opposed to that change and asked the council to leave the area as public.

“I think that was one of the strengths of the design and one of the reasons why it was awarded [to Market Plaza],” Cecile Gorham said. “It met more of the criteria that make a stronger market than the other ones because of the public plaza aspect.”

Gorham said she was concerned that vendors will have to compete with the businesses who operate in the Market Plaza retail spaced.

“If you’re on a private plaza or a private property and you have to compete with private uses versus the public good, it will be harder for the market to compete,” Gorham said.

In September, the Planning Commission voted 4-2 to recommend that the council amend the permit, but added four conditions, including a guarantee that the public would have the right to access the site on non-market days except during private events. Another proposed exception limited those private events to 52 times a year and yet another expanded the public right of way on First Street to 30 feet. The developer offered the city 16 feet.

Market Plaza’s attorney, David Pettit, said his clients only would accept the larger easement if the city would agree to remove snow and perform other maintenance in the space, which will feature a staircase rising up to the plaza level.

However, Pettit said Market Plaza would retain that responsibility if the easement were held to 16 feet.

During the meeting, Szakos also said she wanted there to be places for people to sit in the plaza on non-market days without purchasing anything.

“If the developer commits to having that sort of amenity on the Plaza, I would be less concerned about the full width of the right of way,” Szakos said.

Pettit said the developers would agree to put furniture in the plaza, and the council agreed to the 16-foot right of way.

Councilor Kathy Galvin said the city will not only get space for the market with the agreement, but also a mixed-use building that will generate $700,000 of property taxes every year.

“This project is trying to do so many things for this city in a very tight postage stamp of an area, and I believe it does it well,” Galvin said.

The city parks and recreation department will the manage market portion of the project in the 99-year lease. The city can hold up to two market days each week between April and December.

“That’s something we really pushed for,” Szakos said.

They then turned to the first reading of the land sale agreement.

“There will be a beautification of a two-block area that will be significant,” said Chris Engel, the city’s director of economic development.

The five city-owned parcels have a combined assessment of $1.95 million according to records obtained through the city’s GIS site.

The Market Plaza development team also purchased a private surface lot in the southeast portion of the block for $5 million last June. That property has an assessed value of $479,100.

Councilors will vote on the lease and take final action on the sale of the land at its next meeting, scheduled for Oct. 19.