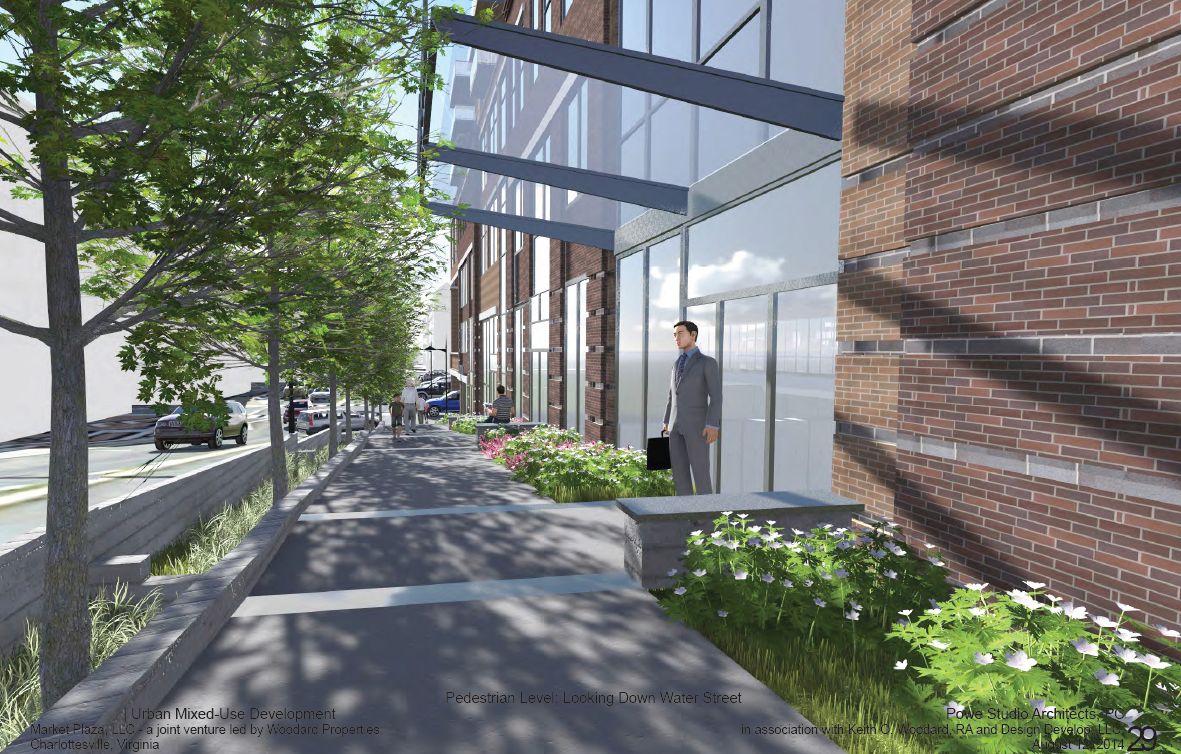 The Charlottesville Board of Architectural Review has given its blessing to additional height and residential density for a nine-story building planned for the parking lot where the City Market currently operates.

“If there is any place that can take a 101-foot height, it’s the bottom of the hill on Water Street,” said Brian Hogg, a BAR member and a preservation planner at the University of Virginia.

Earlier this year, the City Council issued a request for proposals for firms to redevelop the city-owned parking lot that has been home to the City Market since 1993. Four proposals were submitted.

In June, the council chose developer Keith Woodard and architect Gregory Powe to redevelop the site. Because they have secured a purchase agreement with the owners of a private lot within the same block, their plan envisions a half-acre open-air plaza that will be the market’s new home.

“We are sincerely honored and feel it is a big responsibility to take this fabulous undeveloped site and make it into a vibrant, exciting place to live, work and play,” Powe said at a BAR discussion of the project earlier this week.

There will be 69 residential units and 50,000 square feet of office space built atop retail.

Powe said his group had reached out to the market community to see if there was any interest in operating the site six days a week, but there was no interest. As a result, the plaza and the indoor/outdoor market pavilion will be operated as an event space when the market is not in session.

The project needs a special-use permit in order to make the building taller than what is allowed under the current zoning, as well as to have more residences concentrated on the property.

The Planning Commission is expected to consider the permit at its meeting in October, but the BAR was asked to weigh in on whether it thought the special uses were appropriate.

While not germane to the special-use permit, some BAR members were concerned that the project requires the closure of First Street to vehicular traffic to make way for a pedestrian corridor that leads to the open-air plaza.

The council had allowed for this possibility in its request for proposal.

“I find the applicant was put in a bad spot being handed First Street, but I don’t think that’s the right decision necessarily for the city to make,” said Melanie Miller, the BAR’s chairwoman. She suggested that the road might be only closed on market days and during events, similar to the Fourth Street crossing of the Downtown Mall.

Powe said closure is necessary to preserve the same 110 vendor stalls that are currently at the market.

“We do not infringe at all with the building into that right-of-way,” he said.

But others supported Powe’s vision.

“As somebody who has been talking about what to put on these lots for some time, closing First Street never seemed to be such a big deal for me,” Hogg said.

After an hour-long discussion about building materials and the size of the project’s balconies, the BAR voted to say it had no concerns about the special-use permit. However, the project still will need a certificate of appropriateness from the BAR sometime after the council approves it. The council review is tentatively scheduled for Nov. 3.