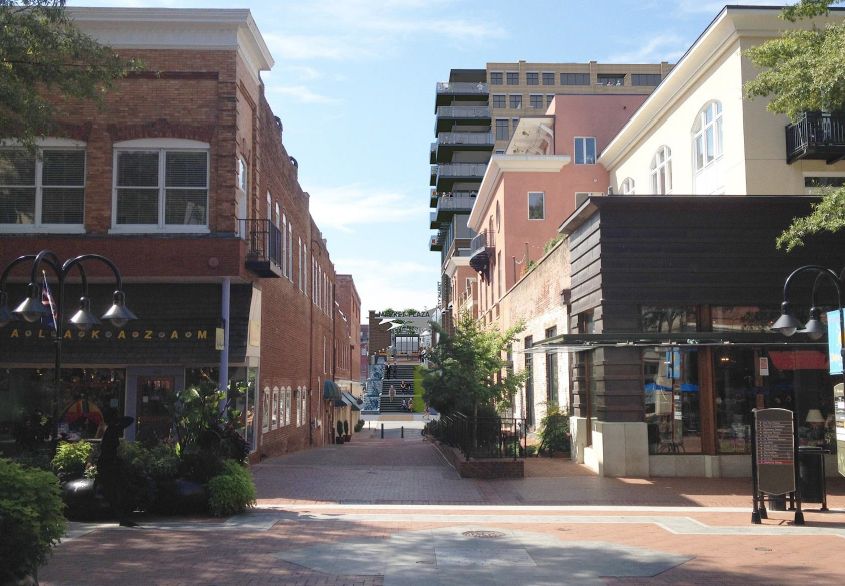 View from Downtown Mall to Market Plaza via First Street

Citing concerns about the sale of public property for private use, the Charlottesville Planning Commission needed more time at its meeting last week to approve a special-use permit for the nine-story Market Plaza.

“We need to figure out what is best for our city,” said commissioner Genevieve Keller. “This project has been thought of for several years and is too major of a decision to make tonight.”

In June, the City Council selected a proposal from developer Keith Woodard and architect Gregory Powe to redevelop a city-owned parking lot that has been the Saturday home of the City Market since 1993.

Their proposed structure would contain residential units, office and retail space and an open plaza to serve as a permanent home for the market. There would be parking under the building for as many as 279 vehicles, with 103 of those being open to the public. A 9,000-square-foot plaza in the block’s southeast corner would be made public to the city.

“Our plan is to have an exciting place to live, work and play,” Powe said. “That’s what our downtown is all about and it’s what the Comprehensive Plan calls for [downtown].”

The proposed 101-foot-tall building would require special-use permits for additional height and residential density. It also depends upon the closure of First Street between South and Water streets.

In September, members of the Charlottesville Board of Architectural Review insisted the road closure should only be allowed if the project maintains views of the city’s warehouse district. However, some commissioners questioned whether that could be accomplished.

Several residents expressed concern at last week’s public hearing about the height of the project. Others expressed concern that having the plaza in private hands would mean it would be closed to the public. Powe refuted that claim.

“This will be a publicly accessible urban park with a fountain,” Powe said.

The agreement being negotiated with the city also would allow private events in the private spaces that can spill into the plaza area.

“We are looking at a legal structure that will allow the best of what the public and private sector can do,” Powe said. “Legal minds are looking at that so we can meet the goal of a public, safe, active, well maintained, highly programmed space.”

Powe said the building also might come with a new traffic pattern.

“We have proposed to change the direction of Second Street Southwest permanently,” he said. “We also could build 20 more stalls and a sidewalk on South Street. A lot more markets, stalls and growth could happen with that.”

Carolyn Meier, a nearby resident, said she had concerns about what she thinks is insufficient parking.

“It’s not a good solution for residents in the area. It’s expensive and not accessible,” Meier said. “Right now, residents have 24/7 access and free parking at night, so we shouldn’t be forgotten.”

Powe said the Water Street parking garage is usually half-empty and that office workers likely would park there.

“Closing off a warehouse district to the Downtown Mall is planning at its worse and unthinkable,” Nelson said.

Roulhac Toledano, who lives in the pink warehouse across from the proposed building, said Market Plaza would break the unwritten rules of a historic district.

“The streets have been here hundreds of years when Thomas Jefferson laid out this plan and we shouldn’t mess that up,” Toledano said. “It’s a beautiful idea and would fit in other places, but not in a historic district.”

Mark Kavit, a North Downtown resident, said he is in favor of more urban density, but said Market Plaza might be too much.

“The design resembles a cruise ship and needs a more traditional look,” he said.

Commissioner Lisa Green said the design doesn’t appear welcoming to everyone for a building in the center of the city. “I’m concerned about shutting down First Street and making it so high that we are creating a barrier and shutting people off,” Green said. “We don’t want to create that barrier. We should keep it open to those businesses and residents living right off the mall.”

Keller said the proposal was thoroughly prepared but felt it was premature to vote without having a work session with the Board of Architectural Review to get further guidance on the building’s design.

Keller made an initial motion to defer a vote until a work session could be held.

“This is not an exercise to completely redesign … it’s to come up with conditions for agreement,” said Lisa Robertson, deputy city attorney.

However, the motion failed on a 3 to 4 vote and commissioners continued their discussion for another hour before voting again to defer.

The final vote was 5 to 2 to defer the application with direction to staff to further evaluate the concerns raised in the meeting. Commissioners Dan Rosensweig and John Santoski voted against deferring the application, saying they preferred that it to go straight to the City Council, which will make the final decision.

City staffers are expected to spend several weeks working with the applicant on a revised plan and conditions before the project returns to the Planning Commission and ultimately to the City Council.

“While we were disappointed to lose a month in our project schedule,” said Powe, “we understand that this month was required for the Planning Commission to formulate reasonable conditions that would be attached to approving the special-use permit.”

Powe said he and Woodard look forward to reviewing the conditions and receiving a recommendation at next month’s Planning Commission meeting.

“This is a once in a great while opportunity for the city to create something memorable,” said David Neuman, the architect for the University of Virginia who serves as a non-voting member of the commission. “So, I think the more people that can get on board with that, the better.”