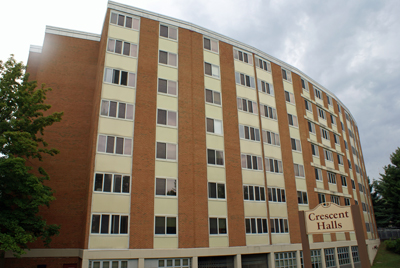 The developer of the new Marriott Residence Inn on West Main Street has made good on an offer to donate money to the agency that operates public housing sites in Charlottesville.

One condition when the hotel’s land was rezoned in 2007 was that the Charlottesville Redevelopment and Housing Authority would receive funding.

The rezoning was intended to make way for a nine-story building but that project fell through after the recession. The hotel was developed by a different firm that chose not to change the proffer.

“We believed it was the right thing to do,” said Stephen Wendell of Mountain Shore Properties. “We try, as best we can, to be team players in the communities within which we develop.”

The proffer specifies that the funding is to be used for “redevelopment of Westhaven Housing Complex or other CRHA housing sites.”

McHugh said the funding could be good seed money for a redevelopment project.

However, the chairwoman of the CRHA board said no decisions have been made about how the money will be used specifically. That won’t occur until after the redevelopment planning process resumes.

“Any money that we can begin to consolidate and pull together and build a pool of funds for our redevelopment efforts is welcomed,” said Julie Jones.

However the money has to be spent within five years or it must be refunded.

Jones said that 99 percent of CRHA’s funding comes from the U.S. Department of Housing and Urban Development. This funding will be set aside for now.

“There’s rarely enough to cover the costs of operating public housing,” Jones said. “We do have a very small amount of reserves at this point but they are not specifically targeted for redevelopment.”

The CRHA board adopted a master plan for redevelopment created by the firm Wallace Robert and Todd in 2010 but its first steps have not been implemented.

“There’s so much to be gleaned from all the work that’s been done in the past so we’re certainly not starting from square one,” Jones said. “There are interesting and important elements within the [master plan].”

Jones also said recent work by the Public Housing Association of Residents will be important. Last month, the group unveiled its vision for how redevelopment needs to take into account the views and needs of the people who live there.

Jones said redevelopment eventually will be a multimillion-dollar undertaking.

“At this point, there are many steps towards a redevelopment process, from planning to community design and engagement to actual drawing of plans,” Jones said. “Given the potential scope of redevelopment, we’re going to needs lots of money and we’re excited.”

The money will not be used for repair work of existing units.

Councilor Kathy Galvin appeared at last month’s CRHA meeting to announce that she is working with Councilor Wes Bellamy to help ensure that ongoing maintenance is conducted as soon as possible.

“First and foremost, the easiest thing they can provide is assistance in identifying and hopefully managing contractors to hopefully help with this work,” Jones said.

The CRHA has been without an executive director since late last year. Grant Duffield will begin work in that role May 23.

“With the timing of the new director, it’s good to know he has some resources at his disposal immediately with the support of his board,” McHugh said. “It’s a great resource and we’re certainly excited about getting it.”