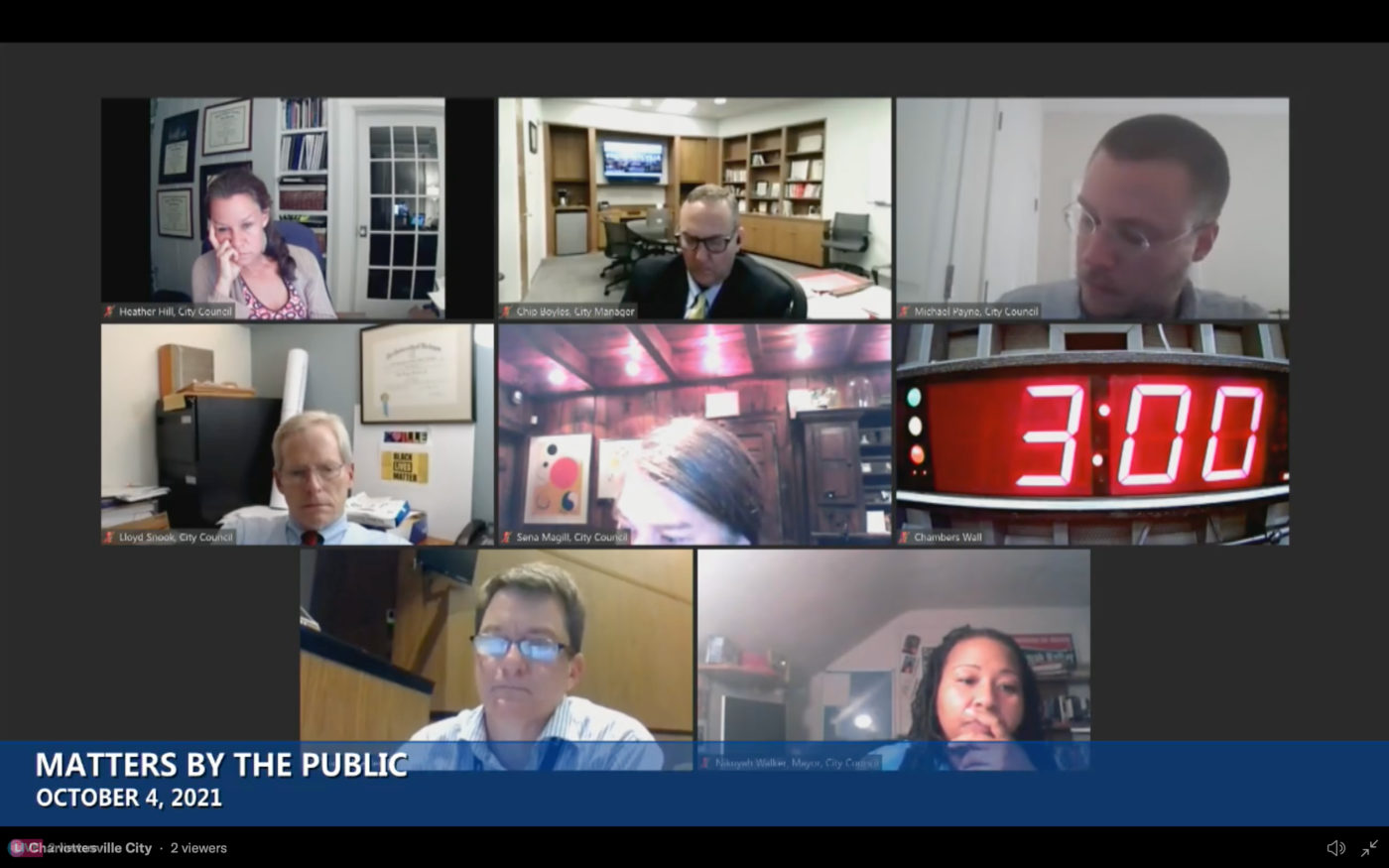 Walker made the accusation at the end of Monday’s marathon City Council meeting, during which she grilled the city manager for details on why he fired Brackney.

The Central Virginia chapter of the Police Benevolent Association wanted Brackney gone, Walker said. And they had secret recordings of Assistant Chief James Mooney that, she believes, they used to coerce Boyles into removing Brackney.

“The reason that she was fired, the urgency around it at that time, is undeniable what that reason was,” Walker said. “Because, unless she had done something that day or that week, which she hadn’t— the only thing that would spark that kind of urgency is Mike Wells and whatever went on with them.”

Walker then played clips of audio from calls between her and Boyles that she had recorded in August. In the call, Boyles explained that Michael Wells, the president of the Central Virginia chapter of the PBA, had recordings of Mooney that could be unfavorable.

“I think the other thing that had him [Mooney] caught in the middle, too, was that he has ties to all of these officers like Michael Wells who taped him with telephone conversations,” Boyles told Walker in the recording. “I think he was also afraid of what may have come out of those conversations if they weren’t heard in their entirety. I think he was talking in confidence to a person who you couldn’t do that to.”

In another recording, Boyles explained that he saw Wells’ motivation for conducting a survey of officers was to get Brackney fired.

“I can’t defend just going back and forth. This Wells guy, all he has in his sights is the chief’s badge,” Boyles said. “He is living 24 hours a day seven days a week to try and get her fired. He can say all he wants to, I think he could care less about the officers. For him, it’s a mission.”

Boyles did not respond directly to Walker’s accusation. But, earlier in the meeting he said that the Mooney recordings had nothing to do with his decision to fire Brackney.

While he had met with Wells twice, and heard a recording that Wells had of Mooney, he said he didn’t find it damaging to the department or to Mooney.

“There was never a quid pro quo arrangement with the PBA regarding those audio recordings, or videos, or any other information that they had that they felt relevant for the Charlottesville Police Department,” he said.

Boyles asserted that he felt a change in leadership was necessary following the results of two police department surveys and conversations that happened in confidence with people who he would not name.

Prior to Brackney’s termination, the Central Virginia chapter of the PBA had conducted an external survey that showed low morale within the Charlottesville Police Department and that a number of officers were considering employment elsewhere. Additionally, CPD had conducted its own internal survey which found similar dissatisfaction within the department by officers.

Though Boyles co-authored an unsigned letter that supported Brackney on Aug. 20, by Sep. 1, he announced that she was fired. Meanwhile, Mooney — who had filed paperwork the day before to retire — is remaining in the department for the next six months as the city conducts a search for its next chief.

“It was a lot going on during a short time,” Boyles said.

Boyles said he learned through the surveys and his conversations with stakeholders that many officers were deeply unhappy and threatening to leave — including several key department leaders.

The department was in chaos, he said. Because of the conversations he’d had, he said he did not believe Brackney would be capable of working collaboratively with officers — and other community members — in the manner needed to fix the situation.

“I don’t like how the information came about,” he said of the PBA survey and its role in his decision to fire Brackney. “But I don’t think it could be overlooked once the information was there.”

Meanwhile, councilor Heather Hill defended the timeline of the termination.

“This decision to me was never in a very finite period of time. It’s been something that has been considered and continued to be considered,” Hill said. “ And some acute things happened where a decision had to be made and I do not believe that it was influenced in the way that you [Walker] are presenting by Mr. Wells.”

Councilors Lloyd Snook, Sena Magill and Michael Payne did not speak during much of the back portion of the meeting, but earlier in the discussion of Brackney’s firing they each reflected on her efforts to reform the department and that they hoped the department would be able to continue on that progress.

Payne said that as reforms occur within the department, “there are going to be officers who don’t want to adjust to those changes.”

“We have to be open and supportive of some officers leaving the force as we move to a different model of policing,” he added.

Trust, however, is something several members of the public called in to comment on feeling a lack of.

“How is this supposed to make the community feel? Where are we at in the factor of anything that’s going on with the city right now?” local activist Katrina Turner said, addressing Boyles.  “It seems like the citizens aren’t even being thought of right now.”