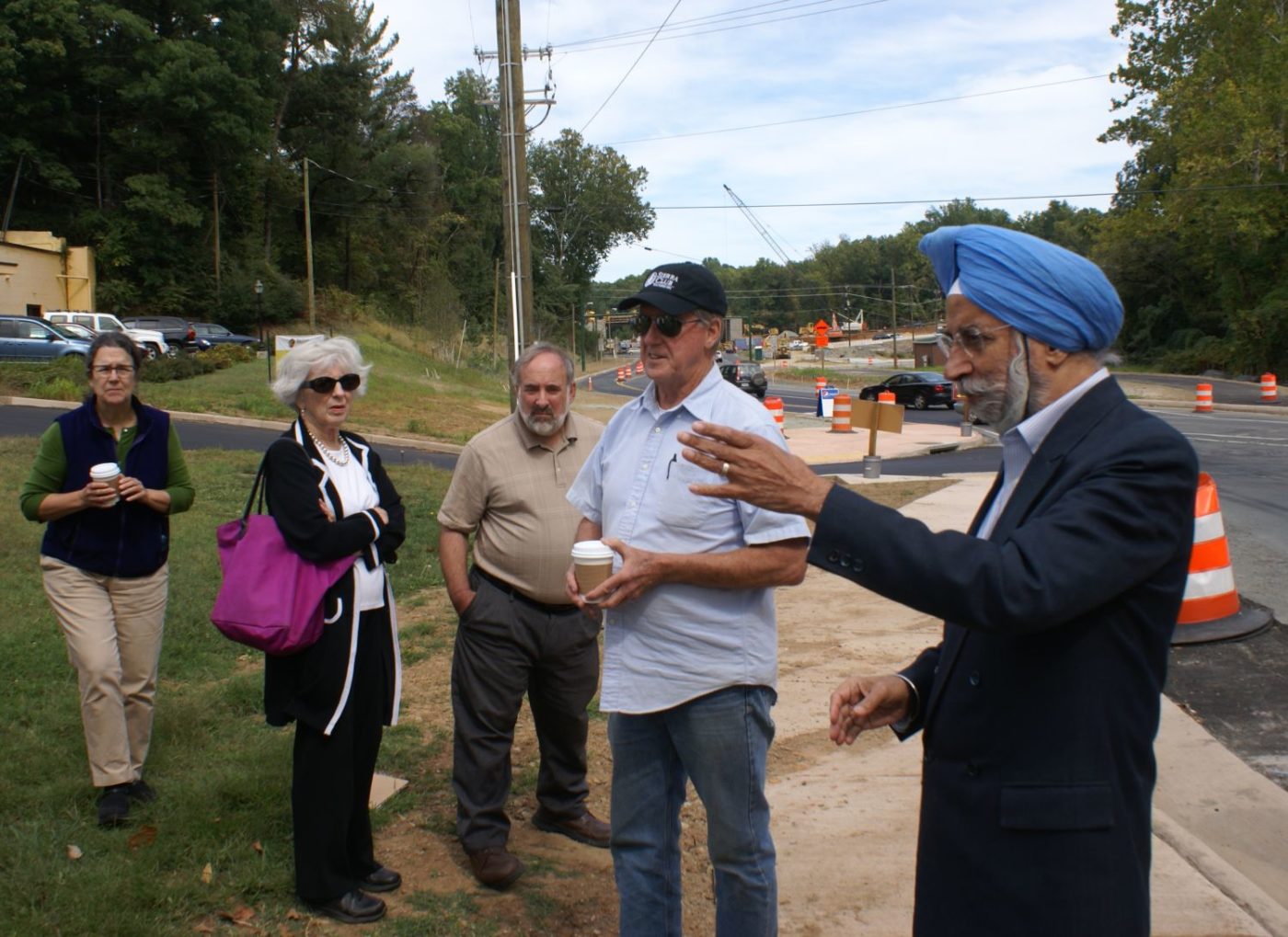 Charlottesville City Council held a rare outdoor meeting Tuesday afternoon at the intersection of Harris Street and McIntire Road to hear from McIntire Plaza business owners concerned about vehicular access to their storefronts.

The owners say construction of a new sidewalk and bike lane as part of the Meadow Creek Parkway interchange project will hurt, not help, their businesses.

“You’ve created something to pacify somebody, but you’ve created another problem,” said Duane Cassis, owner of Carpet Plus.

Businesses in McIntire Plaza have reported drops in sales since construction of the parkway interchange began in the summer of 2013.

McIntire Plaza, which is owned and managed by Woodard Properties, can be accessed by vehicles in two ways. Motorists can turn directly from McIntire Road onto the one-way Allied Lane, or they can enter the property from Harris Street, which also intersects with McIntire Road.

All traffic exits from Allied Street, and motorists seeking to return back to McIntire Road often experience long queues.

Plans for the interchange and how it affects the flow of McIntire Road have been drawn up by RK&K Engineers, which has been part of the project since 2005.

Before work on the interchange began, a turn lane allowed for southbound traffic on McIntire Road to enter into the plaza.

As part of the construction, the curb was extended into the roadway in order to provide a shorter distance for pedestrians to cross McIntire Road.

“When we reconfigured this intersection, it was done because council said, ‘please make this intersection more pedestrian-friendly,’” said Jim Tolbert, the city’s director of neighborhood development services. “That’s only going to grow with the [McIntire Park] opening down there.”

Business owners said at the meeting that this newly installed thumb-like extension makes it difficult for vehicles to turn right into the plaza. Tolbert said the final product would get further refinements.

During construction, there is no space between the travel lane and the curb. After construction, Tolbert said, the lane will be shifted outward by about five feet to make room for a bike lane.

“The turning radius will be a lot less because you’ll be further away from the curb than you are now,” he said.

Cassis said the narrowed lane makes it difficult for delivery trucks to access the plaza.

He said trucks can’t currently access the center without driving up Harris and making a sharp right onto Allied.

Owen Peery, an RK&K engineer who serves as project manager for the interchange, showed a traffic model that he said proved the intersection will work when construction finishes and the new lanes are reconfigured.

“We have designed that radius to handle what we would call a delivery-type vehicle,” Peery said. “I have a pretty high confidence level that the vehicle we design that turn for is going to work in that driveway.”

“You’ve got your modeling, [but] we’ve got over 80 or 90 businesses here with over a hundred years of experience with trucks, and they’re telling you that what you did before didn’t work,” Fenwick said. “Remember that when you show us the modeling.”

Tolbert said he believes it will work.

“We’ll observe it and if it obviously doesn’t work, we’ll come back to council and find a way to make it work,” Tolbert said.

Design of the interchange was shepherded by a steering committee whose members called for better pedestrian connections to McIntire Park. When completed, there will be sidewalks on both sides of McIntire Road.

“We tried to give pedestrians and bikes as many options as we could to get to McIntire Park without crossing McIntire,” Peery said.

Cassis said he does not like that tradeoff, and said pedestrians using the Schenk’s Branch greenway should cross over to the eastern side of the road.

Mayor Satyendra Huja and Councilor Kristin Szakos urged Cassis and other business owners to wait to see what happens when construction wraps up and the interchange is completed next summer.

“The construction has been horrible and I understand that businesses are suffering now,” Szakos said. “But it is our intention that this work, and we’re not doing this intentionally to hurt businesses.”

The council took no action at the hour-long meeting.

Councilor Kathy Galvin was not present as she was attending the regularly scheduled meeting of the Rivanna Water & Sewer Authority.

Developer Keith Woodard is planning to add 30,000 square feet of retail, office space and residential units to McIntire Plaza. He said he wants Allied Lane to be open to two-way traffic.

“The easement calls for ingress and egress,” he said. “Somehow that went away 10 or 15 years ago, but it makes it difficult to get out of McIntire Plaza.”

Tolbert said the city’s attorneys have a disagreement about the easement.

On Oct. 6, the City Council is expected to consider whether to conduct a feasibility study on replacing the signalized intersection with a roundabout.