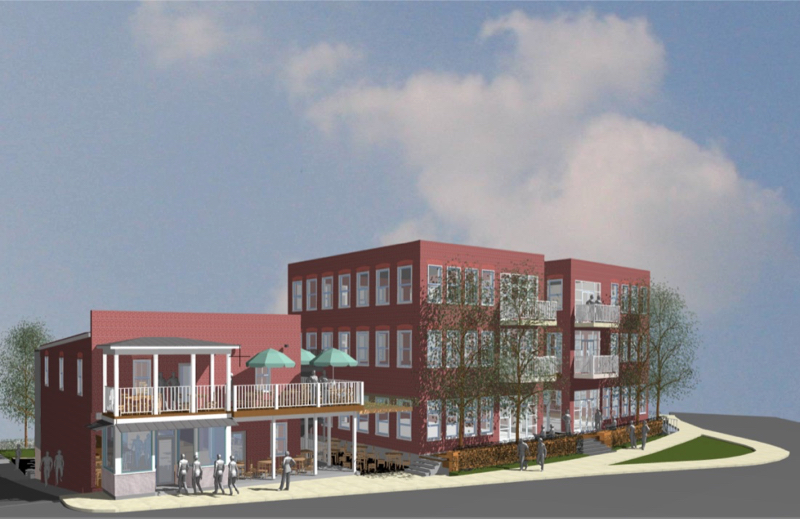 The proposed building would add two three-story buildings adjacent to Junction on Monticello Road. This rendering is a rough draft concept model of the project.

A proposed mixed-use development in Belmont has some residents raising questions about impacts of growth in their neighborhood on traffic, parking and walkability.

“We have not really enhanced the infrastructure there to keep pace with the development that’s going on,” said Tomas Rahal, owner of Mas Tapas on Monticello Road.

A site plan review conference on Wednesday gave community members a chance to ask questions about two proposed three-story additions to an existing one-story building adjacent to Junction, located at the intersection of Monticello Road and Douglas Avenue.

Adam Frazier owns the Junction restaurant, as well as The Local and The Local Smokehouse, which are across the street from the development site. Frazier submitted a final site plan to the city earlier this month that would divide the proposed additions into two three-story buildings with a concrete terrace between them.

The existing building has its mass built into the terrain and is accessible from Douglas Avenue, so the new additions built on top of it will only appear to be three stories from Monticello Road.

According to the site plan, the first-story of each building is anticipated to be about 1,350 square feet of office use and the second and third stories for each addition will be apartments. In total, this development would have four two-bedroom apartments also about 1,350 square feet in size. The building is being constructed by-right because of its location in Neighborhood Community Corridor zoning, which allows for the types of uses being proposed.

About five community members attended the meeting, and several of them raised concerns about parking associated with the site. The site plan has 19 spaces, which would also serve Junction. Frazier said he provided the maximum amount of parking he could given the existing regulations and available land, but attendees said they were concerned about parking and traffic spilling out onto nearby streets.

“I don’t know how you can engineer away from that unless you had an underground parking garage, and honestly the capacity of [the] restaurants, [Mas Tapas], Tavola, La Taza, the barbeque place, conservatively that’s 1,000 people, so let’s just say that’s 500 cars on a busy night,” Rahal told Frazier. “People on Douglas Avenue, people on Carlton [Avenue], people on Meridian [Street] and Belmont [Avenue], they don’t have parking spaces anymore.”

She also said parking on Douglas Avenue can pose a visibility problem for drivers.

“If you’re coming up Douglas and turning on to Monticello, regardless of which way you are going — because the cars are parked so close to that corner — you have to be out in the middle of the road on Douglas to turn and you can’t see anything,” Clayton said.

Clayton suggested looking into the possibility of installing a mirror near the intersection to help drivers see traffic, which Frazier said he was open to looking into.

Residents also noted the various roads that intersect near the site.

“When you consider the intensification that they are planning on, plus what’s going on further down the street in the future, with 200 more units, that intersection’s going to be insane,” Rahal said, referring to a mixed-use development Riverbend Development is considering off Carlton Avenue. That property could eventually be home to 118 dwelling units by-right, or 241 units with a special-use permit, which would require City Council approval.

Carrie Rainey, an urban designer with the city, made it clear that because this proposed development is being done by-right, Frazier is not subject to any proffers or similar special conditions. Residents, however, suggested streetscape improvements they would like to see near the site.

Belmont resident Andrew Chancey referred to a “bulb-out,” or a curb extension, that the city installed at the intersection of Monticello Road and Hinton Avenue a few years ago. This improvement is located near La Taza.

“It’s provided some building protection and it gives a more safe zone for pedestrians,” Chancey said. “If somehow some version of that could come down to that whole intersection of Douglas, Monticello, Carlton, Meridian, that would help.”

Rahal suggested installing bollards, a type of barrier, near the crosswalk connecting the Junction side of Monticello Road with Belmont Market in order to ensure pedestrian use and prevent people from parking cars to block the crosswalk.

“I’d be amenable to doing something like that, if it makes sense,” said Frazier, who also said costs could be a concern.

Chancey said he wanted to see more efforts to mitigate development impacts as projects are approved, but Rainey said the city is required to follow specific rules in what it can require from applicants.

Other concerns residents raised included lessening the impacts and duration of construction, as well as the provision of affordable housing. Frazier said the four units were unlikely to be classified as affordable units.

Frazier said he understood the feedback he was receiving and wanted to work with the neighbors.

“It’s not like I’m not affected by this either,” said Frazier, referring to the growth near Belmont.  He said he lives near Lampo Neopolitan Pizzaria and the Bridge Progressive Arts Initiative, and sometimes can’t find parking near his house when they hold events.

“I’m willing to work to address some issues,” he said. “I certainly don’t want to have adversarial relationships with the neighbors.”

The project will get further review from city staff but it is not anticipated to require a public hearing before the planning commission or City Council.