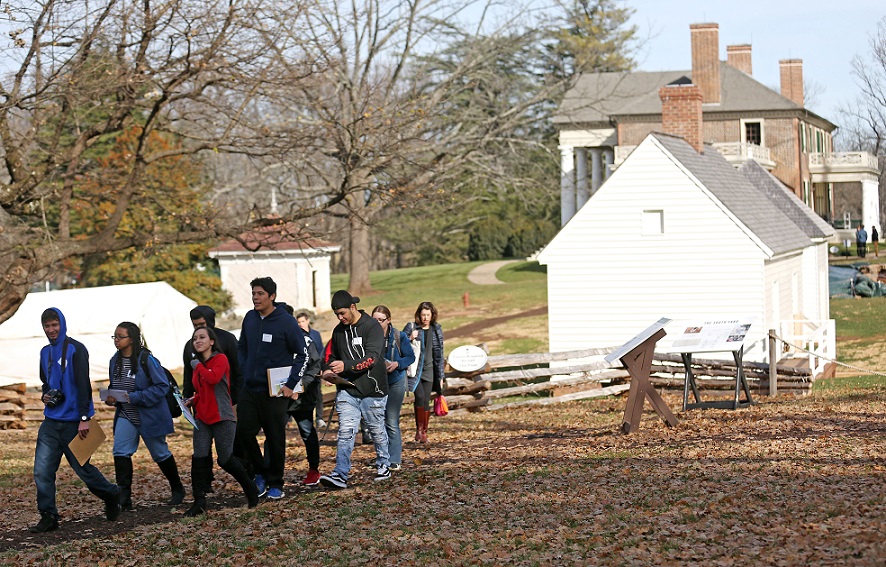 Students from Monticello and Albemarle high schools walk to lunch after watching a film entitled "Legacies of Slavery" at Montpelier as part of a district wide tour of the historic property for local students on Wednesday.

Panelists and audience discuss history and future plans at UVA symposium on slaveryCounty high schoolers tour Charlottesville monuments, memorialsUVa Memorial to Enslaved Laborers moves forward, Cavalier Inn slated for 2018 demolition
MONTPELIER STATION – Albemarle County high school students are engaging with historians at Montpelier this week to learn more about the function of monuments and memorials in society— including their influence on recent violence and racial strife in Charlottesville.
The student symposium at the historic home of James Madison is part of Albemarle County’s Let ‘Em Shine project, in which students in 11th-grade American history classes are working in groups to design their own monument or virtual exhibit. The project is funded by a $20,000 LRNG Innovators Challenge grant from the National Writing Project.
Price Thomas, Montpelier’s director of marketing, said leaders of the county school division reached out to Montpelier in the aftermath of the deadly white nationalist rally in Charlottesville on Aug. 12 to get ideas for educating students about racism in American history.
“At Montpelier, we are excited about telling a more complete American story, and it’s really important for us as an institution to develop better ways to engage kids and younger people,” Thomas said. “We invited [Albemarle County] to bring the kids here, to immerse them in our spaces and let us handle the teaching of it.”
This year, Montpelier opened The Mere Distinction of Colour, a $5 million exhibit that documents the life stories of enslaved individuals at Montpelier.
“We needed to do more to commemorate the people who lived here and really made Madison’s life possible,” said Christian Cotz, director of education and visitor engagement at Montpelier.
The exhibit forces visitors to confront slavery in all its cruelty. It acknowledges that slaves at Montpelier were whipped and likely raped by white farm workers, and that Madison’s descendants tore apart families when they sold slaves to repay debts.
“We often talk about slavery as an experience shared by a race, or a group of people, but we never think about what that experience was like for an individual person,” Cotz said. “It’s hard and emotional to think about it at that level.”
Deborah McDowell, the Alice Griffin Professor of English at the University of Virginia, taught students about Southern nostalgia for the “Lost Cause” of the Confederacy in the early 20th century, which inspired Charlottesville’s statues of Confederate Gens. Robert E. Lee and Thomas “Stonewall” Jackson.
McDowell, director of UVa’s Carter G. Woodson Institute of African-American and African Studies, said Virginia politicians who helped establish Charlottesville’s Confederate memorial parks also backed laws that prevented racial integration, and permitted the forced sterilization of people with disabilities.
“We want students to be aware that an exclusive focus on the statues takes attention away from structural issues … that privilege the wealthy and highly-positioned in our society,” McDowell said.
Kirt von Daacke, professor of history and assistant dean in UVa’s College of Arts & Sciences, said the university has only recently begun to confront the legacy of its founding as an all-white, all-male institution, built and maintained by enslaved laborers.
“UVa was founded by enslavers, for enslavers,” von Daacke said.
As co-chairman of the President’s Commission on Slavery and the University at UVa, von Daacke has overseen the public input and design processes for a Memorial to Enslaved Laborers in the “triangle of grass” across from the Corner.
On Wednesday, some student project groups made 10-minute podcasts about their experience at the symposium in the Montpelier Foundation’s new professional-grade recording studio.
Jose Orellana, a student at Monticello High School, moderated a discussion between members of his project group in both English and Spanish.
Orellana said he was interested in designing a mural to honor the Charlottesville area’s firemen and paramedics.
“They save people when they are in danger, and I think they do a really good job,” he said.
Earlier this year, Albemarle students visited some memorials in Charlottesville, including the shrouded Confederate statues, the Daughters of Zion Cemetery, the statue of a nameless Confederate soldier Court Square and the site of the Court Square slave auction block.
Maddy Boyster, a student at Albemarle High School, said she found the Daughters of Zion Cemetery to be the most moving of the local monuments. “I was fascinated by the stories of the individual people who are buried there,” she said.
Boyster said she was considering Harriet Tubman as a person to memorialize with her final project.
Jaquelyn Brownlee, a history and American studies instructor at Albemarle High School, said the Let ‘Em Shine project is a challenging unit to teach.
“You have to build students’ interest in the idea of history and then convince them that they are a part of this history; that they can make real change,” she said.
Brownlee said students will submit a proposal for their monument project this month as their midterm exam.
“When the kids understand what they want to do, they will come up with things that we [teachers] haven’t even considered,” she said.