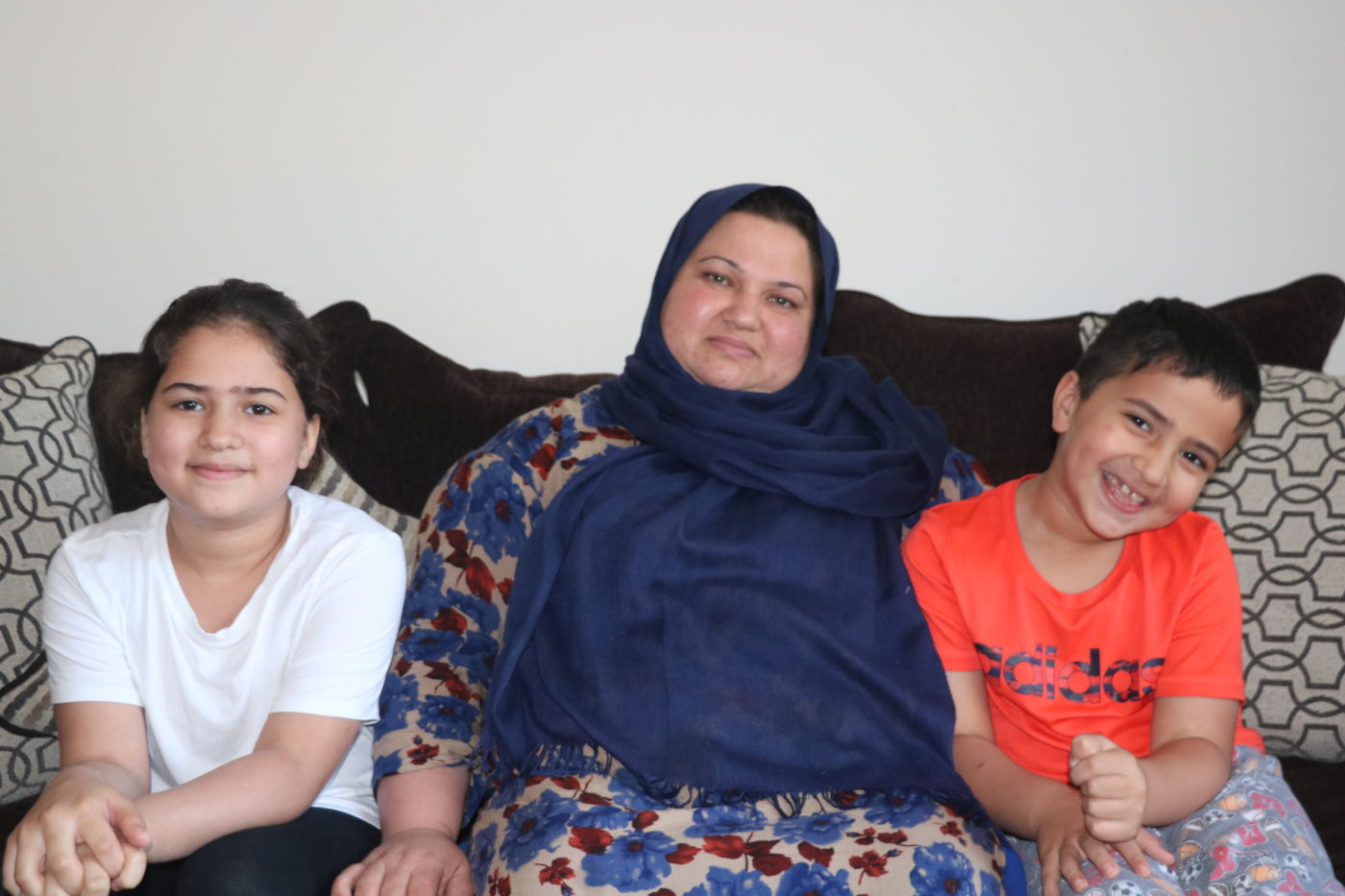 Seerika Safi (middle) said her children (Zarha, left, and Sadique, right) have been happy since they started attending International Neighbors' learning pod. At the space, they receive help with independent work assigned by their English as a second language teachers.

Part two of a series

The 12 Charlottesville children who on a recent morning played on the playground at Friends Quaker Meeting as they took part of the facility’s learning pod all spoke different languages, including Pashto, Swahili, Spanish, Nepali and Farsi.

The learning pods are made possible by a grant awarded specifically to assist Greenbrier Elementary School students, which parents like Seerika Safi and Qalandar Jabbari have lauded. But that’s not the same for other families, who also speak English as a second language. More than 200 immigrant families have requested assistance with virtual learning from International Neighbors, an organization that serves immigrant and refugee families.

With a $35,000 grant from the Charlottesville Area Community Foundation, founder and Executive Director of International Neighbors Kari Miller wrote in an email that she plans to provide families with computers, printers, Wi-Fi hotspots, headphones, furniture and other items to help create privacy for at-home learning spaces.

The plan includes placing someone at these families’ homes to assist them with virtual learning. Assistance will be provided to children from kindergarten through 12th grade.

“We are starting with contacting our vetted volunteers. They have all had background checks,” Miller said, adding so far one family has been paired up with a volunteer.

“We also have a backlog of 100-plus people who have applied to become volunteers in the past, but whose applications haven’t yet been processed due to lack of staffing resources and funds to cover background checks. Many of those folks have experiences with other cultures or other great qualities to share, and we would love to invite them to participate.”

Miller stressed that the main challenge that she anticipates with recruiting people to assist those families could be people being hesitant to go into other people’s homes because of the COVID-19 pandemic. The organization plans on assisting families based on volunteers available.

“Recently, a University of Virginia group contacted us offering a large group of paid and qualified tutors. But it turned out that they were prohibited from being in homes,” Miller said. “ That is crucial for these people to access education. That is what International Neighbors does. We go where no other organization goes. We break boundaries, so that people can get the support they need.”

Qualifications to become a volunteer include some familiarity with laptop computers, connecting to Wi-Fi and a little bit of basic technical know-how, said Miller.

“We’d also like people who are interested in and sensitive to other cultures — which is one reason we’re starting with people who are already involved with [specifically] current volunteers or have expressed interests in our programs,” Miller stressed.

It’s likely that there will be a combination of paid staff and volunteers, Miller said.

“Ideally, families could have a dedicated person to help eight hours a day, four days a week. But it will, of course, depend on how many virtual learning liaisons we’re able to recruit,” Miller said.

“We are also working on expanding learning pods, with plans to open two more pods in motion. As we have only recently learned of the school district’s updated plans for the return to in-person learning in January, we are trying to respond by extending our current efforts for a longer duration and to also try to reach more of the families who need support with virtual learning.”

Safi has two Greenbrier students attending the learning pod and said that she and her family immigrated to the U.S. from Afghanistan in March — around the same time that Gov. Ralph Northam ordered the closure of all K-12 schools.

When schools started again, everything was online. Her children weren’t motivated in the morning, she said, because they didn’t like their virtual classes.

Her children have been happy since they started attending the learning pods, she said, and are more motivated to wake up in the morning. Her daughter, Zarha, an aspiring teacher, said online learning was boring and exhausting.

But overall, Safi said she’s been happy with her children’s learning environment in the U.S. Her younger children are the ones who need the most help. Her older children can get by.

Back in Afghanistan, Safi said she used to be scared as her children left the house to go to school.  But she hasn’t been worrying about such things lately.

She wants a better life for her children, she said.

“They’re happy to be here because they feel safe here. The main problem is the language,” she said.

While safety isn’t much of a concern, Safi said she worries about being able to afford rent and utility bills. All her children are minors, so her husband has to be the sole provider, she said.

She said her financial situation has affected her children because the children can feel the stress. For instance, her children have paid attention to past-due rent notices.

“The children are nervous about the rent. It’s affecting the education,” Safi said.

Jabbari said no one in his household speaks English. Prior to his son enrolling at the learning pods, he couldn’t focus.

He joked that his son told the family that virtual classes lasted just two hours, and then he played video games.

The learning pod has been beneficial to his son, given that no one at the house is able to assist him with writing or virtual learning, Jabbari said.

Karla Delcid Cruz, a learning pod leader at Friends Quaker Meeting, said English is not her first language. And as a child, she took part in her school’s English as a second language program from Kindergarten to third grade.

She said she knew how hard it was to learn English in-person, so it must be even harder to learn it virtually.

“A lot of these families haven’t been in the U.S. very long. It’s an extra challenge to figure out technology,” she said, adding that she applied to the program because she wanted to help.

And, of course, she’s concerned about catching the virus and transmitting it to her family, she said, explaining that she knew that there was a risk.

“But I know that some of these families don’t have the luxury of staying at home,” she said.