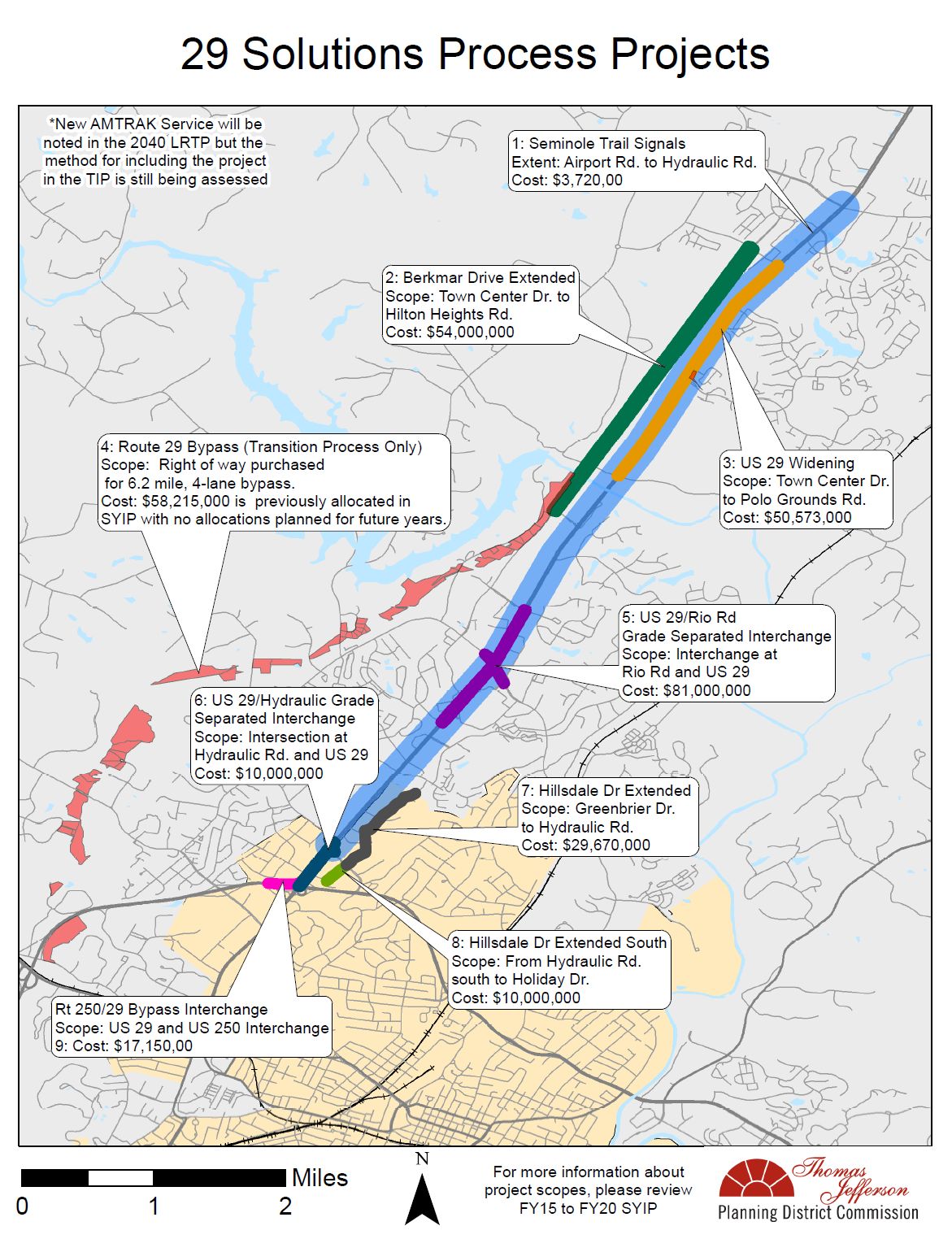 The regional body that approves federal money for transportation projects has backed the transfer of Western Bypass money to the $230 million bundle of alternative U.S. 29 projects.

The Metropolitan Planning Organization’s policy board amended its long-range plan Wednesday to include the package, featuring the extension of Berkmar and Hillsdale drives and an interchange at the intersection of Rio Road and U.S. 29.

More than a dozen people spoke in favor of the move, while one voiced opposition at a public hearing.

“It is critical that we now seize this opportunity to fund these projects and finally move them forward and that we follow the state’s lead in burying the wasteful bypass project once and for all,” said Morgan Butler, an attorney at the Southern Environmental Law Center.

Projects must be included in the long-range plan to get federal money.

The alternative projects also include preliminary engineering for an interchange at U.S. 29 and Hydraulic Road. Other projects already in the plan include the widening of U.S. 29 from Polo Grounds to Town Center Drive and the Best Buy Ramp.

Officials also amended the plan to reflect increased costs for the widening project, from $32.5 million to $50.5 million, as well as a price hike for the Best Buy Ramp, from $11.2 million to $17.2 million.

The bypass will remain in the long-range plan and the MPO’s transportation improvement program while land purchased for the project is sold.

“Funding would have to go to the project in order to facilitate that process,” said MPO transportation planner Sarah Rhodes.

Rhodes added that no additional money will be allocated to the bypass and the proceeds will be transferred to the other projects at the state Commonwealth Transportation Board’s discretion.

Three other projects also were removed from the long-range plan, including the widening of Fontaine Avenue in Charlottesville and Albemarle County.

Former county Supervisor Sally Thomas voiced concerns about VDOT’s plans to award the U.S. 29 projects to a single contractor in February under a design-build concept, meaning design and construction take place simultaneously rather than one after the other.

“Get your words in early because once the contract is out, you will have much less ability to shape things,” Thomas said. “I think businesses and commuters have a real concern and I think that should be expressed by [the MPO] as early and as effective as possible.”

Philip A. Shucet, the former VDOT commissioner tapped to lead two U.S. 29 panels after the scuttling of the bypass, said earlier this month that there would be a “heavy incentive” to complete the Rio interchange by fall 2016. Berkmar and Hillsdale as well as the widening project all must be completed by October 2017, he said.

Neil Williamson, president of the Free Enterprise Forum, urged the MPO to include language in its resolution to require the projects to be sequenced rather than built all at once.

“As the titular head of transportation planning in the region, it is incumbent on you to say something regarding the sequencing of U.S. 29 projects and their impact on the community,” Williamson said.

Charlottesville City Councilor Kristin Szakos, who served on a panel Shucet convened to advise him on the projects, said sequencing was discussed with him. But, she said, “It is not written down.”

“For people who are trying to drive, if we don’t finish the parallel road structure first, there’s nowhere to detour to,” Szakos said.

The MPO added language to its resolution to cover sequencing.

“Whereas U.S. 29 is our main street for both vehicular traffic and commerce, we expect VDOT and/or their designee to sequence and time these construction projects to minimize the negative impacts and focus on maintenance of traffic,” read the language added to the resolution before it was adopted.

“Part of the business community wants us to get in and get out and try to minimize the pain,” Lynch said. “Sequencing has a potential of drawing that out.”

Several speakers had also asked for language calling for VDOT to begin the process of selling back the right of way.

Lynchsaid VDOT will not be able to hold on to the land for long.

The process to get the projects continues on Thursday when the Route 29 Project Delivery Advisory Panel meets at VDOT’s Center for Transportation Innovation and Research. They are expected to review details of request for qualifications that will be sent to potential contractors for the series of projects.