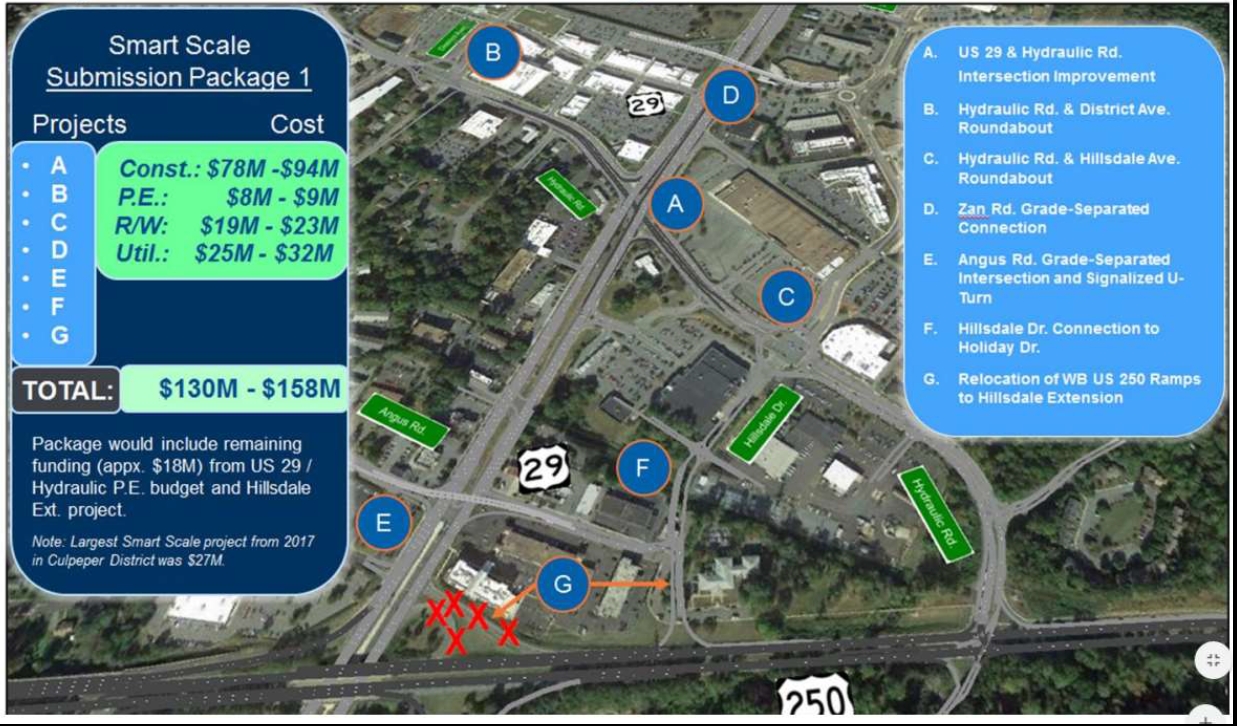 The body of elected officials that makes transportation-related decisions in the region has endorsed several projects for the next round of funding from the Virginia Department of Transportation.

“The initial [deadline] to apply is June 1 and the details for a lot of these projects will be ironed out prior to the application deadline of Aug. 1,” said Chip Boyles, executive director of the Thomas Jefferson Planning District Commission.

That agency oversees the Charlottesville-Albemarle Metropolitan Planning Organization and its policy board, which consists of two city councilors, two Albemarle supervisors and a VDOT representative.

The General Assembly passed a law in 2014 that requires transportation projects to be ranked by criteria ranging from how well they address congestion to how they boost economic development. Projects are only funded if they score well in multiple categories.

In the upcoming third round of the Smart Scale process, Albemarle and Charlottesville are eligible to submit four projects each.

The city submitted an $18.6 million request for West Main in the last round but it was not recommended for funding. This time around the application will be only for the first phase of the project, which will extend from Sixth Street Northwest to Ridge Street. That includes the closure of a right-hand turn lane from eastbound West Main to southbound Ridge.

They are a shared-use path on U.S. 29 between Carrsbrook Drive and the Riverside Center, as well as a new lane on the on-ramp from westbound Barracks Road to the U.S. 250 Bypass. That project also would provide a new sidewalk on the eastern side of the road.

There are currently no cost estimates for the above projects.

The MPO itself will submit several projects to change the intersection of U.S. 29 and Hydraulic Road. The TJPDC has coordinated development of both a small-area plan and a transportation study of that area.

“We started with the land-use plan based on the future growth expectations and then we had a transportation component,” Boyles said.

That work resulted in eight distinct projects that will be packaged into three Smart Scale applications to be submitted by the MPO.

The first submission will include all eight of those projects in one package with a cost estimate range between $130 million and $158 million. That includes $18 million in previously allocated funds.

The other two submissions would include combinations of the other projects in an attempt to get at least some of the work funded in this cycle. The next Smart Scale round is not until 2020.

“We tried to anticipate how it could be broken up in ways that might make the costs more competitive,” said Charlottesville City Council member Kathy Galvin.

An attorney with the Southern Environmental Law Center endorsed the projects.

“The SELC is a member of the panel that developed the projects and we are strongly in favor of them,” said Morgan Butler.