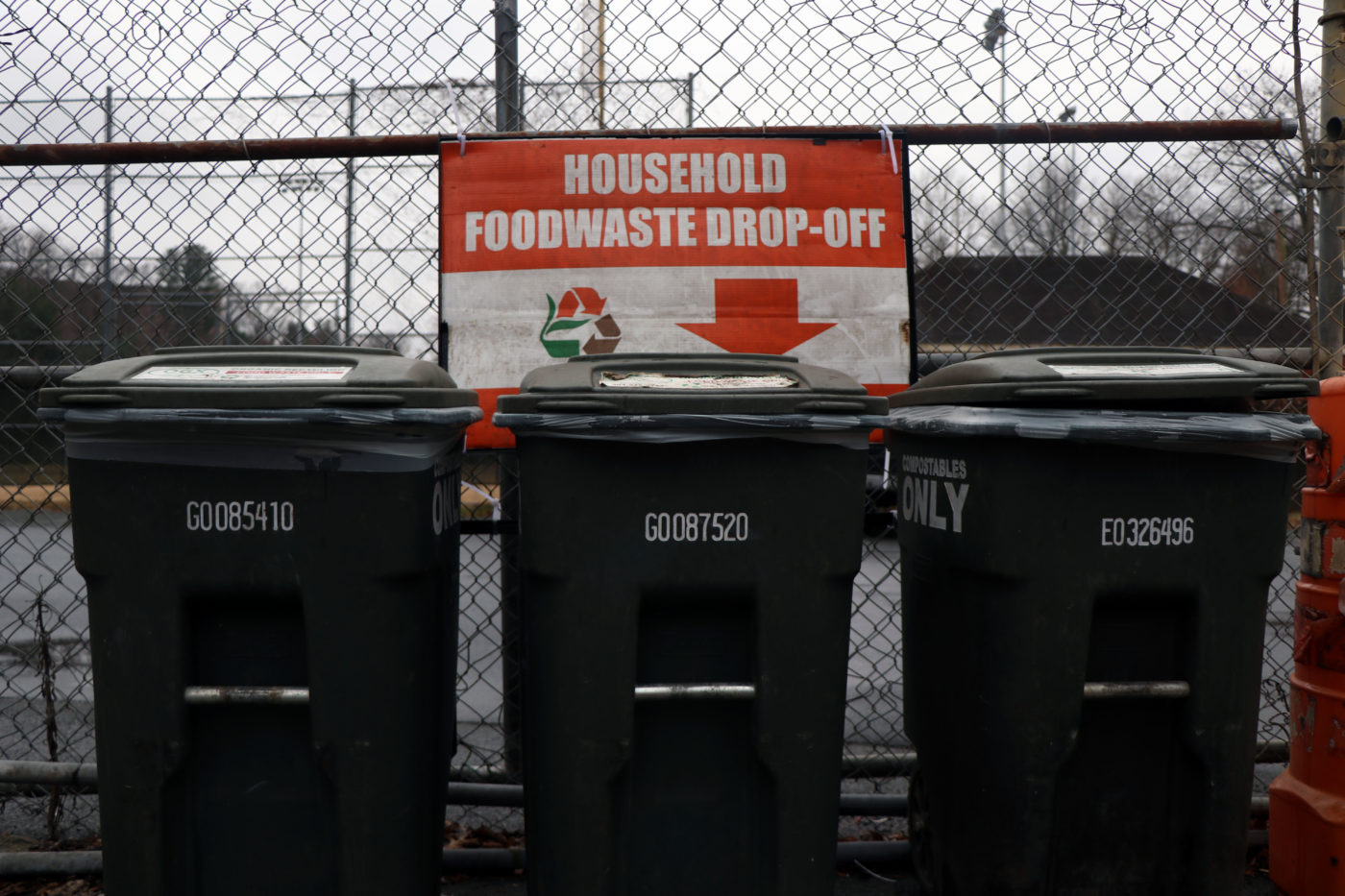 What would the future of composting look like in the region? Local stakeholders and an out-of-state company are trying to figure that out.

As Albemarle County and the city of Charlottesville work on developing clear paths to reduce their impacts on climate, the Rivanna Solid Waste Authority — which serves both localities — recently conducted a feasibility study that laid out different options.

When food waste decomposes in landfills, the organic materials break down and release methane into the air. As the city and county analyze their greenhouse gas emissions and carbon footprints, composting can be one part of that equation.

“My suspicion is that composting is going to end up being one of the active parts of trying to achieve the goals,” said Phil McKalips, director of solid waste at RSWA. “It has cost to do, but the payback is to keep organics out of landfills.” 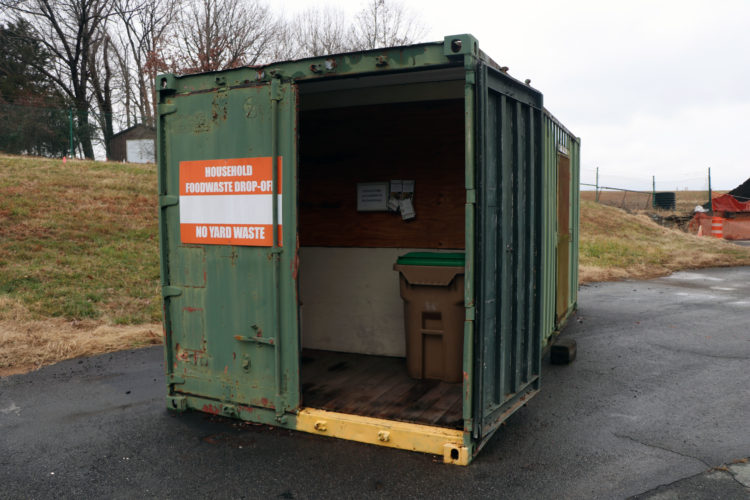 IMUC also has a bin to collect food waste for composting.

Presently, RSWA offers composting services at both McIntire Recycling Center in Charlottesville and the Ivy Materials Utilization Center through a contract with Richmond-based Natural Organic Process Enterprises. Augusta County-based company Black Bear Composting has an agreement with University of Virginia to transport food waste to the MUC and to haul food waste to its facility.  Other composting is conducted by RSWA’s sister organization, the Rivanna Water and Sewer Authority, which deals not in food but rather biosolids that are shipped to a facility in the town of Waverly in Sussex County.

RSWA recently had a study conducted by Coker Composting and Consulting, of Botetourt County.

“That was to say, ‘What would it look like for us to get into the composting business ourselves?’” McKalips said.

The study resulted in several potential options that RSWA could explore, like building a compost facility on the old closed landfill behind the MUC. It also recommended that the city and county develop and outreach plan to encourage more participation in composting food scraps locally. It also suggested that diverting food scraps from landfills could reduce carbon dioxide emissions by nearly 12%.

“When we had Coker look at composting, [owner Craig Coker] looked not only just at the compostable food waste, but also said, ‘Well, what if you went whole hog and you decided to compost everything?’” McKalips said. “The quantities are currently running around 500 to 550 tons per year of compostable food waste versus we’re doing 12,000 to 14,000 tons of biosolids.”

McKalips said the tons of compostable food are expected to go up as more people gain interest in participating.

Another thing RSWA is looking at is evaluating the feasibility of mixing compostable food waste with the biosolids that are already being shipped off to the McGill Environmental Systems facility in Waverly.

“The thought being that this might be a cheaper alternative than some sort of RSWA-operated facility out at Ivy,” McKalips said. “We’ll see how that study turns out.  The two reports should start to give [the RSWA Board of Directors] some reference points from which they can then evaluate costs and benefits and how that fits in with their other financial obligations.”

McKalips said, the study from Coker indicated that the 500 to 550 tons of compostable materials at Ivy could grow over the course of a few years to about 4,000 tons, and that a larger facility could be built for about $1 million with annual operating costs of $150,000 per year.

While building out infrastructure for more composting through RSWA or combining food waste and biosolids are possibilities, there would need to be enough of a need for it.

“We haven’t asked the board to make any decisions on those numbers yet. They are just for information’s sake,” McKalips said. “So, when people are saying, ‘Hey, we need to do composting,’ we now have some idea of what means.” 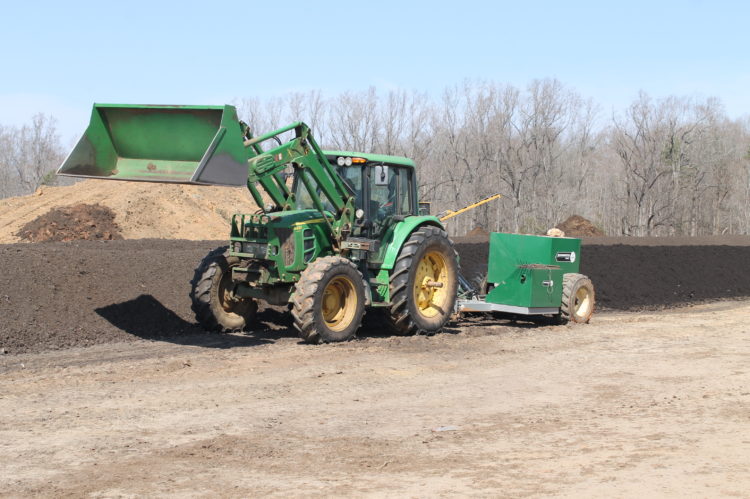 Meanwhile, Earlysville-based Panorama Farms is considering throwing its hat into the mix.

Panorama Paydirt — operating out of Panorama Farms — has served the area for more than two decades by composting leaves, yard waste and other materials.

“We are in the exploratory phase of expanding our feedstock acceptance to include pre-consumer and post-consumer food waste,” said Panorama Paydirt owner Margaret Bloom.

Presently, Panorama accepts various items to break down and repurpose.

“We currently accept leaves. Those come to us starting about the middle of October through the middle of January. The city wants to get rid of them because they can do things like clog storm drains,” Bloom said. “The second main product we take are arborous chips. If a tree company takes down a tree, they chip it in their truck. Another category we take is yard waste. That is mostly small tree limbs, hedge and shrub clippings. Occasionally, it will be things like ornamental grasses. The last category is poultry litter, which is the main nitrogen source that we use to make our compost.”

Panorama Paydirt also has applied for a permit with the Virginia Department of Environmental Quality.

“Because I’m the new owner, we had to apply for a change in ownership permit — and during that process, we are applying to accept food waste as part of our stock,” Bloom said.

After the composting process, the finished products can be placed back into the soil to help with growth.

Panorama Paydirt already has clients — like bulk sales of composted materials to Southern States and Ivy Nursing Garden Spot, and landscapers or gardeners who come to the farm to load their trucks.

“We do currently sell out of compost every year, so we feel confident that we will be able to sell the product on the backend,” Bloom said. “There’s compost on the front end, which is diversion from landfill, and benefits on the backend — fertilizing your soil.”

Carbon capture is also another benefit to using compost in soil, Bloom said.

She cited a University of California, Davis study, published over the summer but conducted over a 19-year-long time frame, that analyzed compost’s role in overall soil health and carbon reduction. For the study, scientists dug 6 feet in depth to compare soil carbon changes in cover-cropped soil and compost-added plots. Cover-crops are plants that are planted to cover soil rather than for harvesting produce, to help manage erosion, quality and fertility of soil.

The scientists found that conventional soils don’t release or store much carbon. They also discovered that by adding compost to soil, it helped the soil capture carbon from the air.

As Charlottesville and Albemarle look to ways to achieve climate goals, compost in soil could be something else to explore, as well.

As for the business of expanding compost types, Bloom said Panorama Paydirt hopes to have in January a completed analysis and a clearer vision of broadening its composting.

Bloom said Panorama Paydirt potentially could start accepting a limited number of food waste vendors as it adjusts its composting recipe. The process can take up to 16 weeks, so she said that even if her company were to begin accepting materials in January, it wouldn’t know the results of how it composted right away.

“Our plan is to start slow and change our recipe accordingly and then figure out how to market that particular type of compost to our customers,” Bloom said.

South Carolina-based Atlas Organics also has expressed interest in composting in the area and had initial conversations with RSWA.

“It’s pretty preliminary, but we have talked a few times with Phil [McKalips],” said Jarrett Bond, controller and operational analyst for Atlas Organics. “We have a general proposal and overview of operations. We’re hoping to schedule a site visit to talk about more specific things hopefully at the beginning of this year.”

The company operates composting facilities in various cities and counties within the Carolinas, Georgia and Tennessee. It most often utilizes public-private partnerships and, should it collaborate with RSWA around Albemarle and Charlottesville, would be the company’s first foray into Virginia.

Bond said that depending on the property of a potential facility, Atlas Organics could process up to 14,000 or 15,000 tons of material at about a 50-50 ratio of carbon and nitrogen.

On the possibility of contracting with Panorama for more composting, McKalips said that the costs and feasibility of all options will be weighed.

“If Panorama becomes a cost-effective local composter, I think that we become just another vendor and they become one of our composting options,” McKalips said. “I suspect that others will have less need to look to us to be the regional solution.  Obviously, this presumes Panorama has the capacity, pricing and interest in becoming the “community solution” for all its organics recycling. If they have more limited goals, then we have to see where there may be a need that we can be useful in meeting.”

As for Atlas Organics, McKalips said both companies are “really just trying to understand how an arrangement would work; what are the questions we need to be asking.”