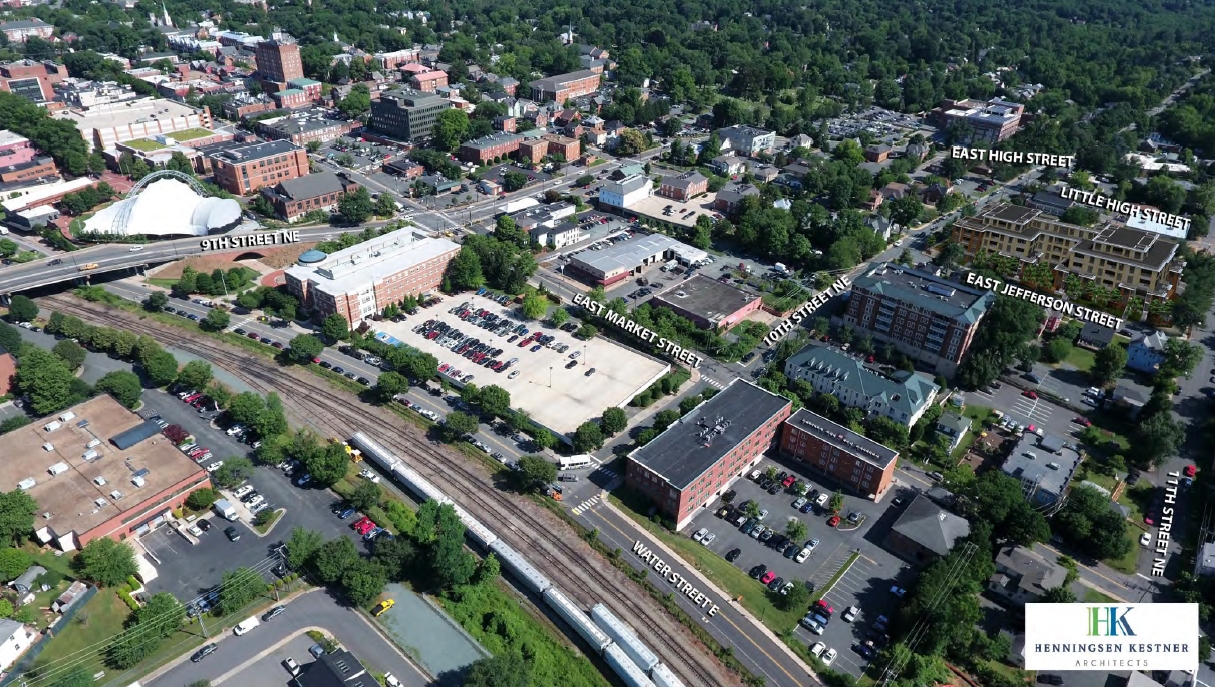 More than two dozen residents of the Martha Jefferson and Little High neighborhoods asked the Charlottesville Planning Commission on Tuesday to deny a special-use permit that would allow a 126-unit apartment building at the corner of 10th Street and East Jefferson Street.

“I don’t understand why this huge building has to come into our neighborhood,” said Sumner Brown. “I think there are a lot of other places where this can be built.”

The Great Eastern Management Company is seeking the permit to replace a 1970s-era, two-story medical building with a residential complex.

“With the changes that have occurred in the way that health care is delivered these days, the building is no longer set up appropriately,” said Valerie Long, an attorney with the firm Williams Mullen.

The 1.46-acre property is zoned under the city’s B-1 commercial district, which allows 21 dwelling units per acre without a permit.

Great Eastern Management has requested a permit for up to 87 dwelling units per acre, and the current proposal is for 126 units with a maximum of 180 bedrooms configured in one- and two-bedroom units. There would be 226 parking spaces in structured parking.

“Under the B-1 zoning classification, 30 dwelling units could be developed by-right on this site,” said urban designer Carrie Rainey.

The commission did not hold their discussion or make a recommendation until after press time. Under a new policy, the commission holds all of the public hearings on its agenda first before beginning its deliberations.

In recent years, the former Martha Jefferson Hospital site has been transformed into a mixed-use development that houses several businesses, including the CFA Institute and Hemoshear. Those companies are less than a quarter-mile away from the site.

“The apartments would be primarily geared towards young professionals and seniors who want to live near the excitement and nightlife of the mall,” Long said. “We also hear from companies who say there is a shortage of options for young professionals.”

Long said the developer also would agree to comply with the city’s affordable housing policy that would require 15 percent of the units to be affordable to a household that makes less than 80 percent of the area’s annual median income.

“This will be one of the first developments to actually build affordable units as opposed to paying into the [Charlottesville Affordable Housing Fund],” Long said.

Staff recommended approval with several conditions that were submitted by the applicant. These include construction of several sidewalk improvements to make the area safer for pedestrians, including a widened sidewalk on 10th Street and “high visibility” crosswalks.

However, speaker after speaker the commission to recommend denial of the permit.

“It’s too big, it’s massive and it’s overly dense,” said Kate Bennis, the president of the newly formed Little High Neighborhood Association. “The by-right density sounds perfect in terms of the transition area. We would like to see the 30 townhouses.”

Mark Rylander, of Lexington Avenue, said the city needs to re-examine the zoning code in order to prevent the possibility of a large building being constructed near low-density residential neighbor-hoods.

“I think this speaks about the need, city-wide, for transitions to protect low-density neighborhoods,” he said.

During her presentation, Long stated that the building would attract people who didn’t want a car. Many in the audience were not willing to believe that idea.

“It would be nice if everyone in that building walked downtown, but we can’t guarantee that,” Brown said.

Jo Lawson, of East Jefferson Street, said she was concerned the project would dwarf 11th Street, and she asked for a new proposal to be submitted.

“This is a post-World War II neighborhood of smaller houses with lots of green space,” Lawson said. “What we would like to see is single-family houses that are in the spirit of the 21 units per acre and work with the developer for a higher density on 10th Street.”

Other speakers disputed a traffic study that revealed the project would generate less traffic than the existing use.

Only two people spoke in favor of the special-use permit. One was a doctor who works at Pediatric Associates who said working conditions in the building are deteriorating.

“This is a building that was built in the 1970s, and it has a wonderful location and a wonderful parking lot,” said Dr. Carlos Armengol Jr. “That’s where our love for this buildings ends.”