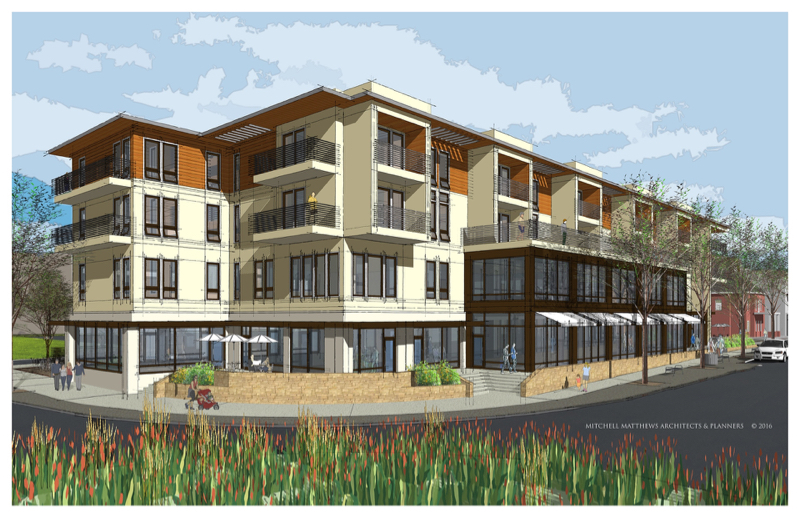 The four-story building would feature retail space on the first floor, office space on the second floor and 22 apartments on the third and fourth floors.

A new commercial space will likely bring three to five new retail spaces to Old Trail in Crozet next summer.

Initial details were recently announced for a second phase of commercial space for the Old Trail Village Center that will be built along Old Trail Drive, located just north of Grit Café and Public West Pub and Oyster Bar.

The 50,000-square-foot building will be developed by the Building Management Company and will include retail space on the first floor and office space on the second floor. The mixed-use building also will have 22 apartments on the third and fourth floors.

“The expectation is that they are going to break ground later this year with delivery of the building in late summer of 2017, so we are actively seeking retail and office users for the space,” said Ben Wilson, director of property management for Nest Property Management, which is leasing spaces in the building.

Brockman said there will likely be three to five retail tenants, depending on how the ground floor space is divided up.

“We’ve had our ear to the ground for a while, listening to the existing merchants that are in Old Trail and in Crozet and speaking with residents, so we hope to bring at least one more restaurant to this facility,” Wilson said.

Wilson said some other retail ideas include an outdoors shop, a bike store and a small grocery with a deli.

Brockman suggested a boutique could be another possible type of tenant, in addition to potential service-oriented tenants.

“We’re hoping to be very inclusive in our search, and we certainly appreciate and welcome feedback from area residents,” Wilson said. “We want to be good neighbors and we want to help provide a new service that people will use.”

This building will be part of Old Trail’s continued growth.

The entire Old Trail development is currently home to about 650 residential units. About 400 by-right units are located in what is known as the Ballard Fields Neighborhood Villages and 250 units are in the Old Trail Village, which has neighborhood model district zoning that the Albemarle County Board of Supervisors approved in 2005.

The Old Trail Village will eventually have between 1,000 and 2,200 residential units, including apartments, townhomes and single-family attached and detached housing.

It was originally supposed to have a minimum of 1,600 residential units, but the Board of Supervisors lowered that number to 1,000 units in February.

“When this zoning was approved prior to the global recession, back then things looked a little differently. Density seemed to be a lot more palatable,” Brockman said. “As people started to understand what growth and growth impacts we were going to have, and what the market has done, we really just felt like, to have a minimum number of units at 1,600 … might be too burdensome and what the market was really looking for was probably something less than that.”

Brockman said one benefit of the reduced minimum is that pocket parks have been incorporated into the design of Old Trail Village.

Old Trail Village likely will be built at the lower end of the range, although an exact number hasn’t been determined yet in order to provide some flexibility, Brockman said.