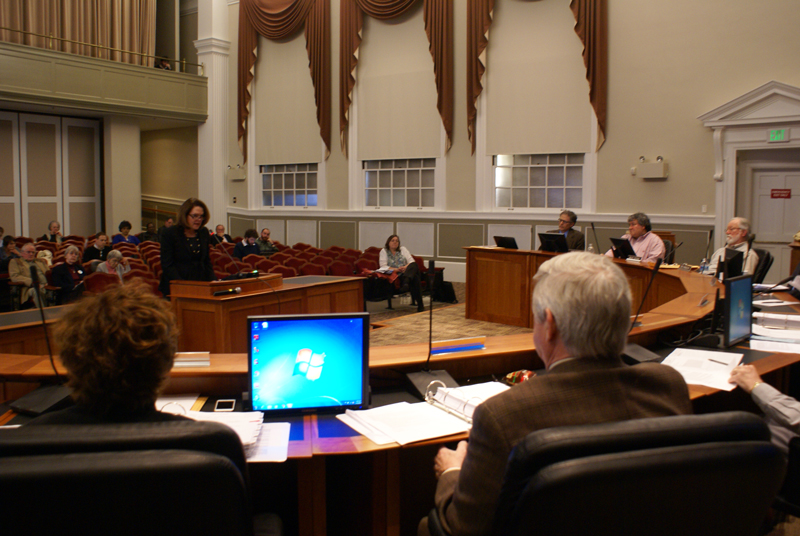 In the latest phase of the Albemarle’s Comprehensive Plan update, the county Planning Commission heard public comment Tuesday focused on Monticello, the county’s vision of itself and its economic vision for the future.

The comprehensive plan is the document that directs a locality’s land use and planning goals, and the state code requires all of Virginia’s cities and counties to update their comprehensive plans every five years.

One noticeable change is the document’s physical size.

“[In the 2007 version] we had five sections in the Comprehensive Plan and they were kind of unbalanced,” county principal planner Elaine Echols said.  “Those sections were created at different times and they each start with the growth management policy.”

“[In the current draft] we’ve pulled these sections together into one single document and moved the growth management policy [to the beginning of the plan],” Echols added, noting that these changes should decrease repetition and increase ease of use.

But not everyone is pleased with the slimmer plan.

“[Over time,] the plan got very lengthy, but now there is the risk of subtle thoughts being eliminated,” said Tom Olivier, president of Advocates for a Sustainable Albemarle Population.

“Even in the September discussion there was a statement about where high development density can be placed, but unfortunately that has disappeared from this draft of the plan,” Olivier added.

Free Enterprise Forum president Neil Williamson expressed concern over the presence of guidelines intended to protect Monticello’s viewshed.  They suggest design consultations with Monticello staff for buildings in a large swath of Charlottesville and Albemarle.

Williamson has described these guidelines as an “effective land grab via the comprehensive plan.”

Ann Taylor, executive vice president of the Thomas Jefferson Foundation, noted the presence of the viewshed language in the 2007 comprehensive plan, as well Monticello’s historic and cultural significance as a UNESCO World Heritage Site.

“There should be a vision that outlines the sort of community we want to become,” Olivier said.  “Unfortunately, the vision statement in the comprehensive plan is only one long sentence, and it could apply to Bath County or to Northern Virginia.  It’s too broad to be useful.”

“ASAP has taken the position that a community should identify the optimum sustainable population size,” he said.  “We’ve suggested that 165,000 be the ideal size for the Albemarle-Charlottesville community.”

With respect to individual liberties, Dr. Charles Battig took issue with the entire document and suggested the plan deserved to be “rejected out-of-hand.”

“Virginia code requires comprehensive plans to be ‘general in nature,’” Battig said, “but this plan imposes micromanagement at every level and in every aspect of county citizens’ lives.”

With respect to the county’s economic future, developer Wendell Wood cited the need for the county to zone more land for light industrial uses.

Piedmont Environmental Council land conservation officer Jeff Werner responded that he was not in support of rezoning land to light industrial in the rural areas.

Werner also addressed the issue the difficulty of promoting economic development in the rural areas while retaining the landscape’s rural character.

“There’s the issue of non-agricultural commercial activity in the rural areas, like Castle Hill [Cider],” Werner said.  “There’s a lot of concern about how far that will go.”

The Board of Supervisors recently granted Castle Hill Cider a special use permit to hold an annual cider festival.

“As far as restaurants in the rural areas,” Werner added, “I really encourage you to direct those to these crossroads communities.  That’s a way we can rebuild some of these villages.”

Also looking toward the future, and speaking on behalf of Cville Rail and the Piedmont Rail Coalition, Meredith Richards encouraged the commission to support the presence of railroad travel in the transportation section.

“We have a rail line that is making history right here,” Richards said.  “The Lynchburg to Washington line made $3.3 million last year, grew 20 percent in its second year and 14 percent in its third year.  People are choosing to take the train instead of driving to New York, Boston, Washington and points in between.”

The planning commission is expected to discuss the draft Comprehensive Plan at a future meeting before making a final recommendation to the Board of Supervisors.