Yolunda Harrell, CEO and founder of New Hill Development Corp, is a regular customer at Mel's Cafe, a restaurant on the edge of the Starr Hill neighborhood.

When Yolunda Harrell first moved to Charlottesville, she was the only African-American hotel manager in the city. The apparent absence of a black middle class here came as a shock, and her first reaction was to consider leaving.

“Oftentimes, for those of us that have moved to Charlottesville — that have lived in other, more diverse areas — we come here, and we go, ‘Where are all the businesses? Where are all the black people? Where are the social activities that I want to engage in that are culturally relevant?’” Harrell said.

Ten years later, Harrell has founded a nonprofit that aims to help make Charlottesville a home for black professionals like herself and a place of opportunity for those who have hit a glass ceiling.

Harrell’s New Hill Development Corp. seeks to expand the city’s black middle class through a financial training program and a small area plan for the Starr Hill neighborhood. Starr Hill includes part of what used to be Vinegar Hill, a predominantly black neighborhood and business district that the city demolished in the 1960s.

“We were just looking at a symptom,” Harrell said. “So, then we started to look at — what were the businesses like before that were here? What helped make that community, the African-American community, feel that there was opportunity?”

“My sister works for a community development corporation in Columbia[, South Carolina]. She’s been with them for about 12 or 13 years, so over the years, we’d always call about what they were working on,” Harrell said. 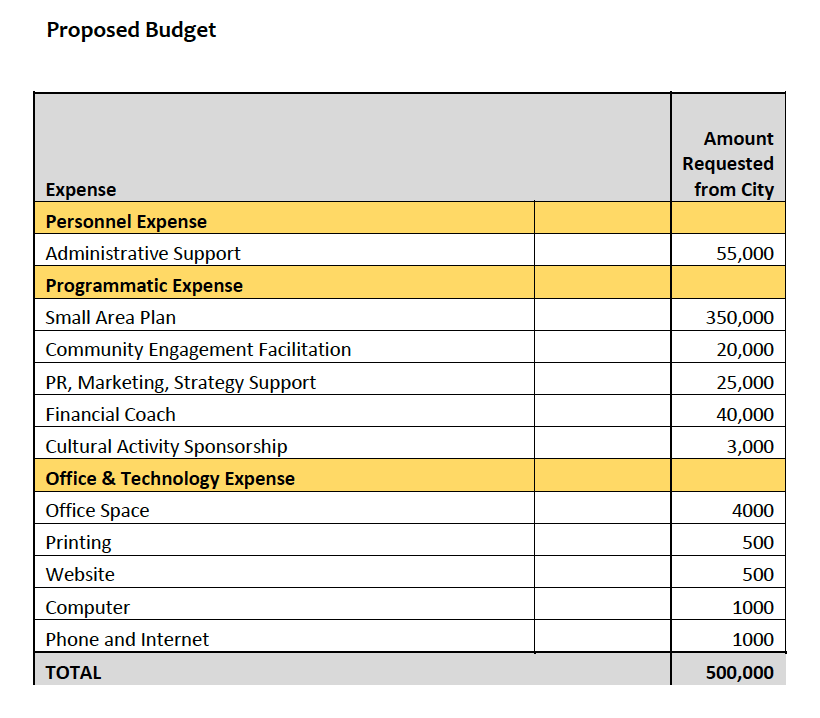 New Hill budgeted $350,000 to draft the small area plan in their request for a donation from the city of Charlottesville.

The city of Charlottesville was an early donor to New Hill. In April, New Hill registered with Virginia as a nonstock corporation to legally become a nonprofit. On Nov. 5, the City Council voted 4-1 to donate $500,000 to the nonprofit — a third of the Council Reserve Fund for Racial Equity and Engagement.

The fund was established with a budget surplus in December 2017, and New Hill is the only organization so far to have received money from it.

Mayor Nikuyah Walker voted against the donation. In a Facebook Live post two days later, she explained that she felt she did not have enough information to vote at the time.

“I ran on a platform of transparency and accountability. … No matter who you are, that transparency-accountability piece is a must,” Walker said. “Someone else will come and say, ‘You remember how you didn’t ask them any questions? You remember how you just gave them a half a million dollars?’ I work very hard not to put myself in those positions.”

The allocation, which did not require a public hearing, prompted criticism and confusion among activists dedicated to racial equity in the city.

“The people that it’s supposed to affect know nothing about it. … The low-income community and the black community in general shouldn’t be left out of the decision-making process,” said community activist Tanesha Hudson, who first heard about New Hill at the council meeting at which funds were allocated to the group.

Hudson grew up across the railroad tracks from Starr Hill, and her family members’ homes are scattered throughout the surrounding neighborhoods.

Hudson said the nonprofit asked for city money too early in its formation.

“They need to show everybody how this is going to be equitable for people of color,” Hudson said. “If you’re just naming it after us and going to throw up some pictures and some markers to say this is what Vinegar Hill used to be, if white people are going to set up businesses and meat shops and breweries and wineries and whatever else they might put, that’s not for us.” 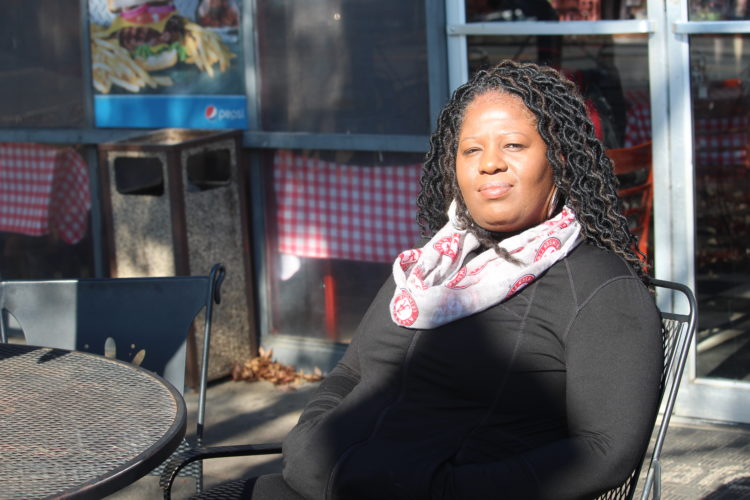 Yolunda Harrell, CEO and founder of New Hill Development Corp, is a regular customer at Mel's Cafe, a restaurant on the edge of the Starr Hill neighborhood.

“We didn’t want to go to the community and say, ‘This is what we can do,’ but then have no real way of making sure it goes to fruition,” she said.

Harrell has successfully sought partnerships with national organizations with major funding bases. The Local Initiatives Support Corp., which will help New Hill draft the small area plan, was established by the Ford Foundation in 1979. Operation HOPE, which will help New Hill with its financial training program, partners with businesses such as the Coca-Cola Co. and JPMorgan Chase & Co.

Harrell said that community feedback will determine what the small area plan will look like, beyond including chapters on economic development, land use, housing and historic preservation.

Harrell intends to form a community advisory board and gather other stakeholders’ visions by attending their meetings and events.

Questions about conflicts of interest in the city’s donation arose early. During the City Council discussion, local activist Nancy Carpenter asked from the audience whether any councilors were on New Hill’s board.

Although Councilor Wes Bellamy has since left the board, Virginia’s State Corporation Commission website shows Bellamy as a founding board member of the nonprofit.

“It was kind of my idea. You can look on my Facebook and my Twitter feed a year ago, I was like, ‘People deserve a New [Vinegar] Hill,’” Bellamy said in an interview. “Once it got off the ground and it was moving forward, I took a step back.”

However, even if Bellamy remained on the board, his vote to allocate money for the nonprofit would not be illegal. Virginia specifically excludes government officials serving on nonprofit boards from its conflict of interest laws, as long as they are serving on the board without pay.

Questions also have arisen about whether New Hill is a nonprofit. The City Council donated to New Hill on the grounds that it was a charitable institution or nonprofit that prevents deterioration in local neighborhoods.

New Hill has applied for but has not yet been granted a 501(c)(3) tax exemption from the IRS, so it is not listed on the federal nonprofit search website. However, New Hill was incorporated with Virginia as a nonstock corporation, which legally makes it a nonprofit.

“Incorporation with the state creates the legal entity, but filing with the IRS for 501(c)(3) tax-exempt status, if approved, allows for donations to be tax-deductible,” said Kadi Davis, membership manager for the Center for Nonprofit Excellence.

Organizations like New Hill can still accept tax-deductible donations, provided they disclose that their 501(c)(3) status is not yet confirmed. If the IRS denies New Hill’s application, those donations will not be tax-deductible. 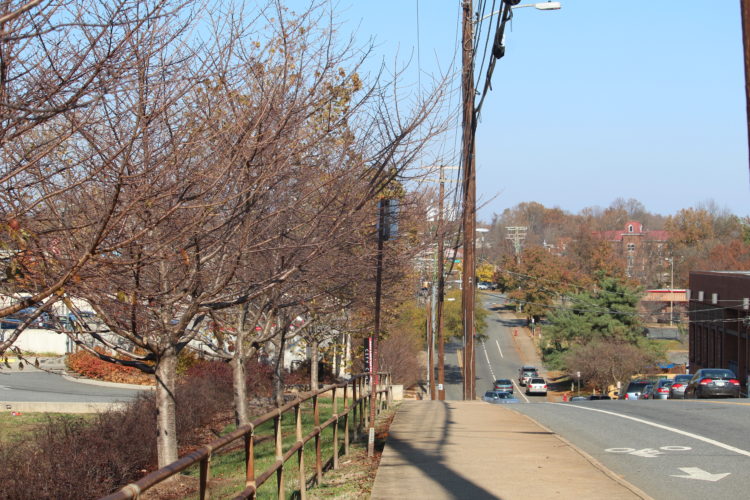 Starr Hill includes part of what used to be Vinegar Hill, a predominantly black neighborhood and business district that the city demolished in the 1960s.

In Walker’s Facebook Live video, she emphasized that she is excited about what New Hill might be able to do and that their partnership with the Local Initiatives Support Corp. could lead to LISC’s involvement in other city projects.

“You don’t rule people out. You just ask for things to be done right,” Walker said.

Harrell intends to begin the engagement phase in January and said New Hill will post its community meeting schedule online. In the meantime, interested community members can sign up for New Hill’s newsletters at www.newhilldev.org/join-us.