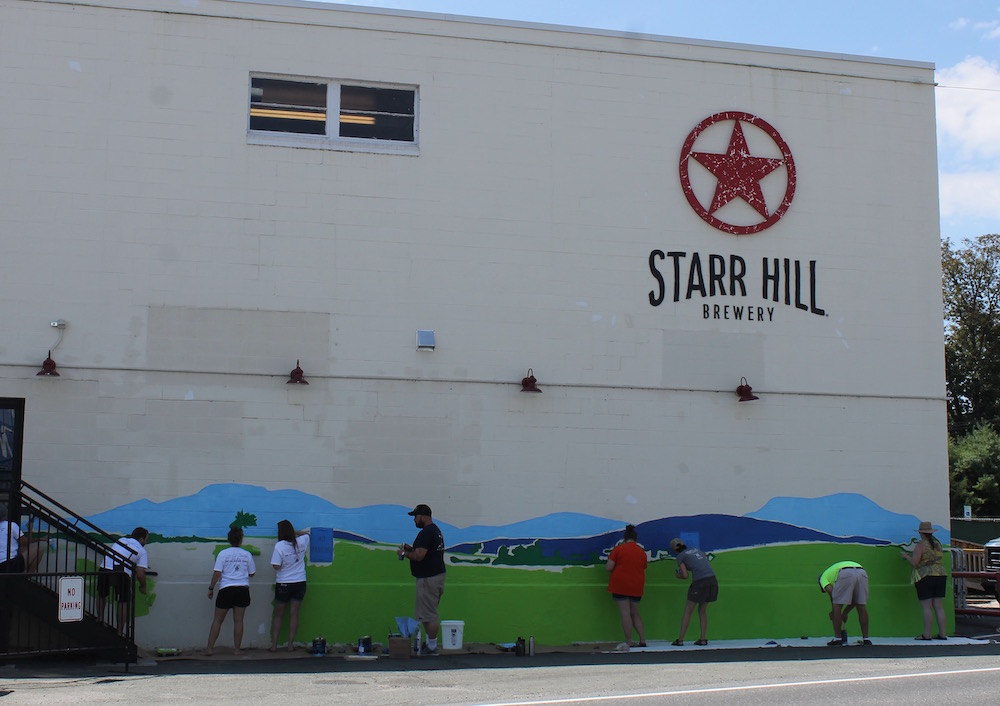 Last Sunday, Starr Hill held a paint-by-numbers event where community volunteers picked up paintbrushes and livened up the building with a mural of the Blue Ridge Mountains.

Another colorful mural now faces Three Notch’d Road in Crozet, thanks to dozens of community volunteers who recently picked up paintbrushes and brightened the front of Starr Hill Brewery.

Starr Hill partnered with the Charlottesville Mural Project, a program of the Bridge Progressive Arts Initiative, for logistical support.

“It’s an effort to get people out and participating in community art,” said Alan Goffinski, director of the Bridge PAI. “[The art] fits really beautifully with the surroundings and will complement the drive through town there really nicely, I think.”

The brewery held a paint-by-numbers event, called Color Crozet, to celebrate Virginia Craft Beer month, to make their building more exciting and to engage the community. The mural, a simple but textured depiction of the Blue Ridge Mountains, mimics part of Starr Hill’s branding, and lines the bottom of their website and the sides of their trucks.

“At the end of the day, we loved the simplicity of the design that we already had,” said Jack Goodall, marketing manager for Starr Hill. “So we thought, ‘What better way to get our local community involved than to have them help us out with the painting of this mural?’”

On Sunday, about 15 volunteers at a time painted the white-walled facade and an inside wall of the brewery. They filled in mountain outlines with blues and greens and then used bubble wrap dipped in paint to add a textured layer.

Starr Hill has embraced the mountain motif in part because it represents the company’s roots.

After only a few hours, both parts of the mural were close to complete, and Goodall declared the day a success.

“There were folks who we’ve seen in the tap room all the time, and then we overheard some folks and were chatting with them that this is their first time at the tap room,” Goodall said. “So that for us was really cool.”

Emily Berger, who now lives in North Carolina, grew up in Crozet and volunteered to paint last weekend while back in town.

“It’s nice to come back and see things like this at home,” Berger said. “Crozet has really bloomed a lot since I’ve left.”

“It’s very Virginia,” Vagonis said. “It’s simple [and] it’s got enough punchy colors that everybody knows what it is … It’s exactly what you’d want a mural on the side of a brewery to be.”

Vagonis came to the event with her roommate, their two friends and their dog Rosie.

“So it’s a family affair,” she said, laughing as she filled in the light-blue of a mountain. A recent graduate of the University of Virginia, Vagonis joked that it’s the little things, like a mural-painting day, that help to relieve the daily stresses of her post-grad life.

Mike Gonzalez, who lives in Northern Virginia, said he and his now-wife held their wedding rehearsal dinner at Starr Hill and always stop by for a beer when visiting family in town.

“I like to do art things, but I can’t say that I paint on an easel or anything like that,” Gonzalez said. “But I love it, I mean, who doesn’t? It’s just funny how you get older and then you start doing things that remind you of your childhood.”

It was the free beer that piqued Charlottesville resident Mark Orr’s interest when his fiancée told him about the event, but helping to create public art is what he found most impressive.

“I think everyone’s life is improved by art, by finding beauty in everyday life,” Orr said. “I think it’s good to get out, and if anything else, improve the community with art.”

The Charlottesville Mural Project has partnered with artists, schools and organizations all over the area to create public art. The group has three other ongoing projects.

Partnering with Albemarle County and UVa Arts, the group hopes to complete a permanent mural on the U.S. 250 exit ramp to Barracks Road this fall.

“[We hope that] the overwhelming support of the community behind it will allow us to push forward and make something really beautiful and really good for the city and improve what is an extremely visually unpleasing and derelict wall,” Goffinski said.

Plans also are in the works to add a mural to the blank wall of the Bridge PAI’s building on Monticello Road. The design isn’t set yet, but Goffinski said it likely will be an abstract, geometric pattern.

The Bridge PAI also has partnered with the American Civil Liberties Union to bring a mural titled “The First Amendment Looks Beautiful in Any Language” to Charlottesville. This mural has been painted in cities all across the country and the Bridge PAI is searching for the right placement in Charlottesville.

“We’re really excited to bring it, of course, to America’s founding city, home of Thomas Jefferson,” Goffinski said. “It only seems appropriate, that that project would extend to Charlottesville.”